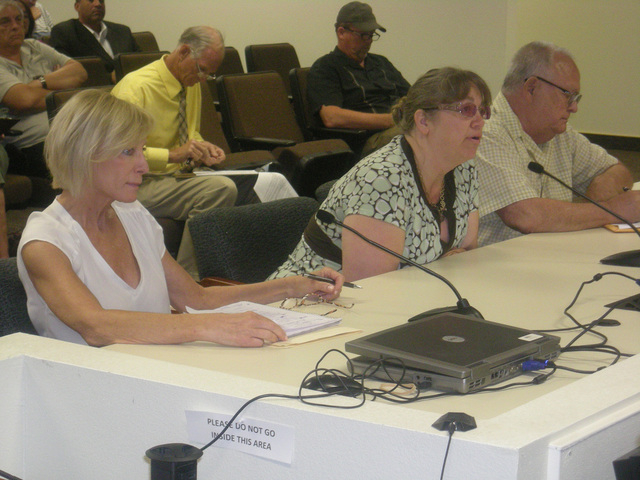 Nye County Commissioners changed their minds Tuesday and decided to have applicants for medical marijuana licenses appear before them, prior to the state considering licensing, which will be between Aug. 5 and Aug. 15.

It boiled down to an issue of having more local control. District Attorney Brian Kunzi said the county can already control what facility comes into Nye County through the licensing and special use permit.

Commissioners were previously overwhelmed with the process for granting special use permits, which is required to get a license from the state. Commissioner Dan Schinhofen asked county staff to come up with a matrix for ranking applicants, possibly at the next meeting.

Kunzi said commissioners had to decide whether they want to control the number of applications sent to the state that meet state requirements or just send those that meet the requirements of a county special use permit. Kunzi said he has been getting numerous emails over the subject from people who are correct, that the state can grant a provisional registration for a marijuana establishment in August, based on the state statute, which then requires the applicant to meet county zoning requirements.

But Kunzi raised the possibility if the county restricts the applicants to only a couple of applicants to the state and they’re rejected, Nye County could end up with no facilities.

“I don’t want to spend four days in a Board of Commissioners meeting listening to presentations by people saying I’m better because,” Commissioner Lorinda Wichman said. “If we have 40 of them that qualify for the SUP process and you give each of them 15 minutes for a presentation, figure it out.”

Wichman wanted to wait for the state to rank the applicants.

“It’s going to float a bunch of cream to the top,” she said, adding the applicants would have to come back to the county for the special use permit anyway.

When Commissioner Donna Cox asked how many applicants there might be for a Nye County medical marijuana establishment, Kunzi said, “it’s definitely less than 10 and I would probably put in more in the range of six or seven.”

Schinhofen said he heard from other communities there could be three or four grow houses needed to supply the dispensary.

“I don’t see it as a burden to have 10 applicants go through the system,” said Debra Strickland, co-owner of Strickland Construction who wants to build a grow house and is a consultant for a medical marijuana applicant.

So what criteria would commissioners like that would give points to a particular applicant? Wichman suggested Nye County residency, but Kunzi noted that was struck down by the 9th Circuit Court of Appeals in requiring a six-month residency to apply for brothel licenses. Schinhofen liked the idea of what the business would give back to the community.

Cox said medical marijuana is free enterprise, adding, “I don’t want to get into a situation where we’re open to somebody giving us bribes.” She said the county doesn’t screen what doctors can set up business and also had concerns over running up more expenses on the county.

Commissioner Frank Carbone said the commission can refer to the criteria the state is looking for.

“I don’t think we need to do it in four days,” Schinhofen said.

Kunzi said the state would apply “a very subjective measure” in considering applicants. He said as long as the county has a factual basis on which to base their conclusions it wouldn’t be challenged in court.

State Assembly Majority Leader William Horne, D-Las Vegas, an attorney representing three different medical marijuana groups, said the state accepts applications from individuals, not counties and municipalities. But the state can grant a license contingent on county approval, he said applicants have 18 months to start operation after state approval, giving the county plenty of time to consider it.

“I don’t see anything wrong with doing the ranking and setting it up. It doesn’t mean the state is going to pick the ones you want,” Horne said.

In Clark County there are 81 applications for medical marijuana dispensaries, of which the county is going to send 18 to the state,” he said.

Former State Sen. Sandra Tiffany said if the county sends up a handful of prospective applicants and they don’t like the state’s first choice, the county can go on to the second or third one. She predicted the next legislative session in 2015 will open up more numbers of medical marijuana establishments.

But Tiffany was concerned she may have to disclose proprietary information to her competitors in the special use permit process, like an operating plan that’s almost 100 pages, a business plan of 75 pages and very sensitive information about her start-up operation and cost. She said the state requires a $250,000 commitment from a member of the company, financial statements, experience running a medical marijuana establishment and five years of taxable income.

“I’m encouraging the board to take control of their destiny that’s been granted to them and shepherd this application,” former Assemblyman Ed Goedhart said. He noted the current and former state legislators in the audience now lobbying for medical marijuana establishments, which he said is a $100 billion business in Carson City.

“There’s going to be a lot of processes you’re going to have no input into,” Goedhart said. “We select the one that’s best for Nye County. Don’t kick that decision to somebody else. I’m always hearing from Nye County we want more control over our own destiny.”

He urged commissioners to take the responsibilities entrusted in them, take control of the process and take the heat.

Jennifer Goldstein, an attorney representing Bady’s group, urged the board to select the most qualified medical facility operator.