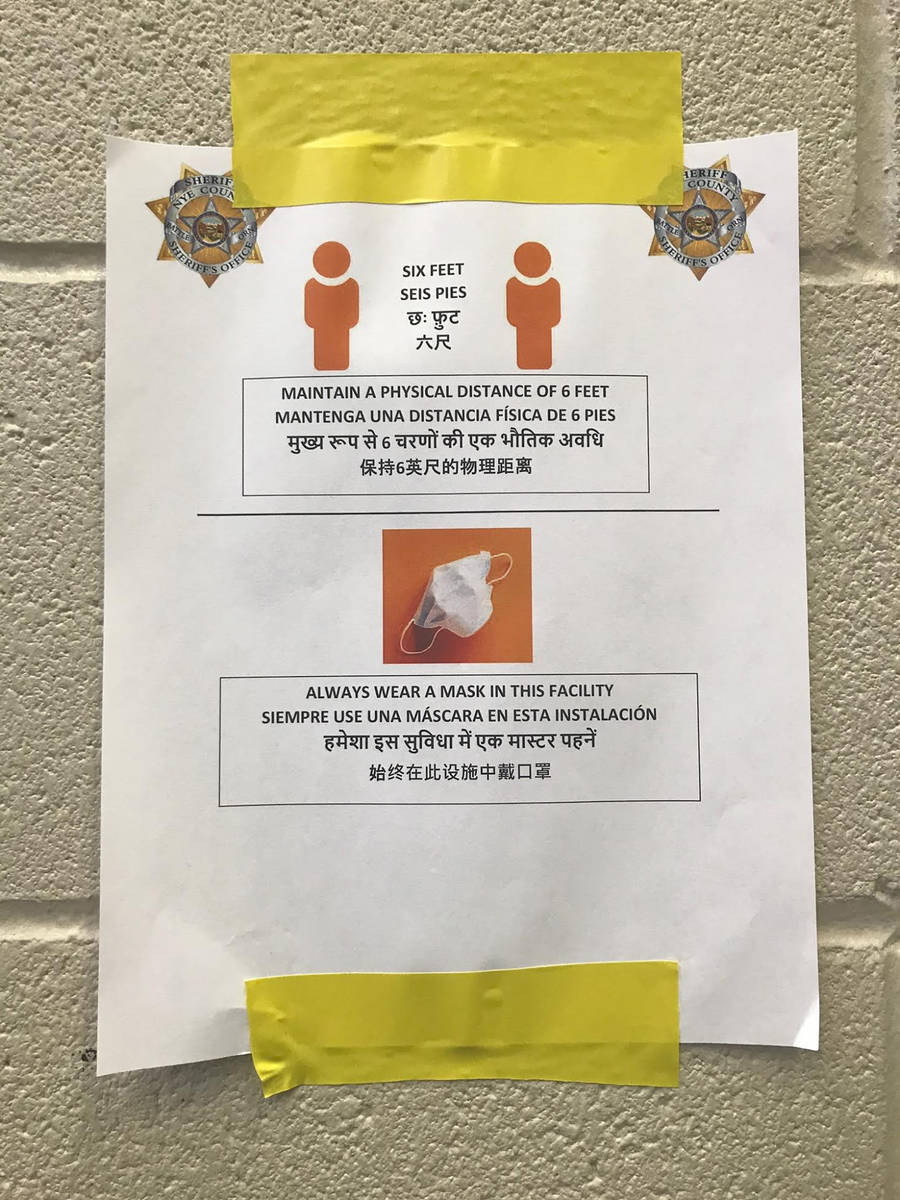 Special to the Pahrump Valley Times Provided by the Nye County Sheriff's Office, this photo shows one of the multiple signs that have been placed around the county's detention centers, with multiple languages included to help ensure all those at the detention center are aware of the need for social distancing and using masks. 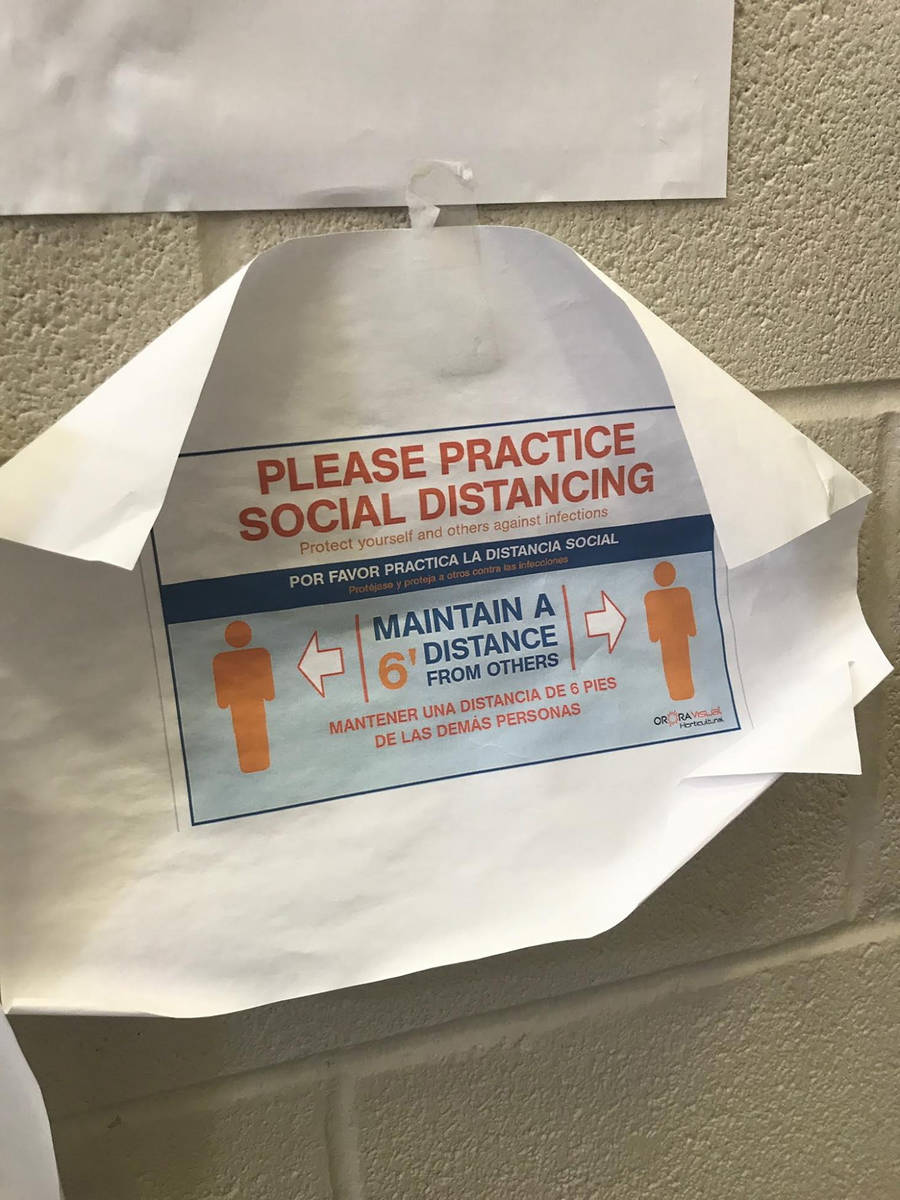 Special to the Pahrump Valley Times Another shot of a sign encouraging those in the Nye County Detention centers to observe social distancing. 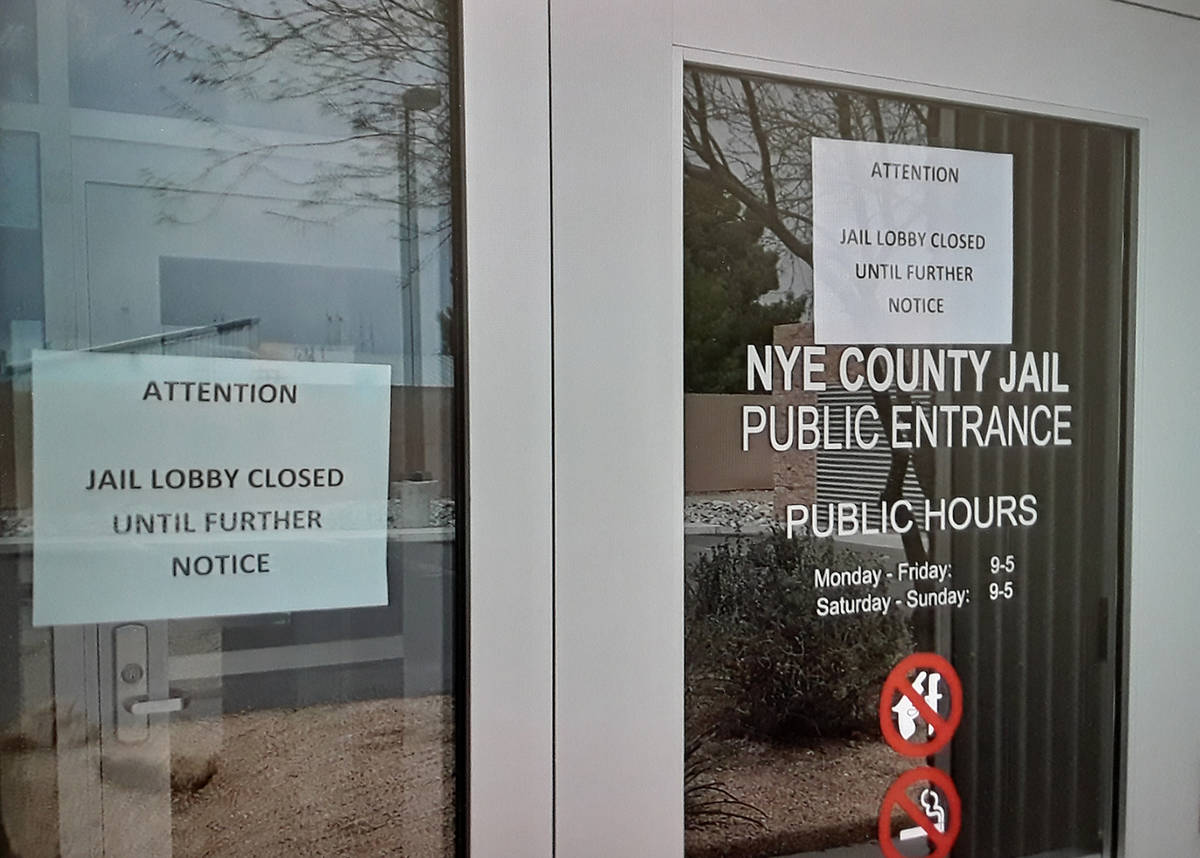 Special to the Pahrump Valley Times Nye County Detention Center in Pahrump has 30 confirmed cases of COVID-19 among inmates while the Tonopah jail has seven inmates who have tested positive for the virus. The sheriff's office is still awaiting the results of further testing on all inmates and staff.

For the last four months, COVID-19 has been steadily spreading throughout Nevada and though Nye County’s numbers remain low in comparison to the state as a whole, the county has certainly not escaped unscathed.

Every week has brought news of additional residents testing positive for the virus and now, COVID-19 has found its way into the local jails, with 37 detention center inmates confirmed as infected so far.

“NCSO cannot definitively identify where it (jail COVID-19 outbreak) began,” Nye County Sheriff’s Office Capt. David Boruchowitz told the Pahrump Valley Times when reached for comment on the situation. “There would be no way to know.”

However, Boruchowitz did state that there was a medical employee who works in the detention center who tested positive for COVID-19 at the end of June. “That was the first exposure in this round of positives,” Boruchowitz said. He then emphasized, “Keep in mind we had staff test positive previously without an outbreak. We have no way of knowing where it started. Just like most of the public doesn’t know where there exposure began.”

Nearly all of the cases in the Pahrump jail were among those being detained as part of the county’s contract with U.S. Immigration and Customs Enforcement and with that being the case, there has been a lot of speculation among the community as to why. As Boruchowtiz explained, the fact that the bulk of positive results in the Pahrump jail came from ICE detainees was merely a product of circumstance.

The pods that were initially tested in the specific wave of tests that revealed the numerous positives were those that predominantly contained ICE detainees, he stated. These pods were the focus of testing not because they housed ICE inmates but because that was where symptomatic inmates were residing, therefore, it is logical that the majority of positive results would come from ICE detainees.

“The remainder of the jail has been tested, once those results start populating, I predict that that will change,” Boruchowitz stated, adding, “I hope not, but realistically it likely will change.”

He also noted that around half a dozen detention center employees had tested positive for COVID-19 so far as well.

When asked if there was any possibility of certain inmates being released to help curb the spread of the virus, Boruchowitz explained that decision was not in the Nye County Sheriff’s Office’s hands. “The NCSO does not dictate the release of inmates. Judges make those determinations,” Boruchowitz said. “Early on in this pandemic the sheriff’s office and courts got together and released low-level offenders that could be released without much compromise to the community. I don’t anticipate any additional.”

Boruchowitz noted that the sheriff’s office has been taking precautions as recommended the the U.S. Centers for Disease Control and Prevention, including social distancing to the extent possible, the use of masks by inmates and staff and reduced interaction with the public.

Following the confirmation of the 37 positive cases, Boruchowitz said additional measures have been taken as well.

“Since the outbreak the jail has been running on lockdown to minimize the interactions inmates have with each other,” he said. “In addition, any who are positive are housed separately from others, of course on quarantine.”