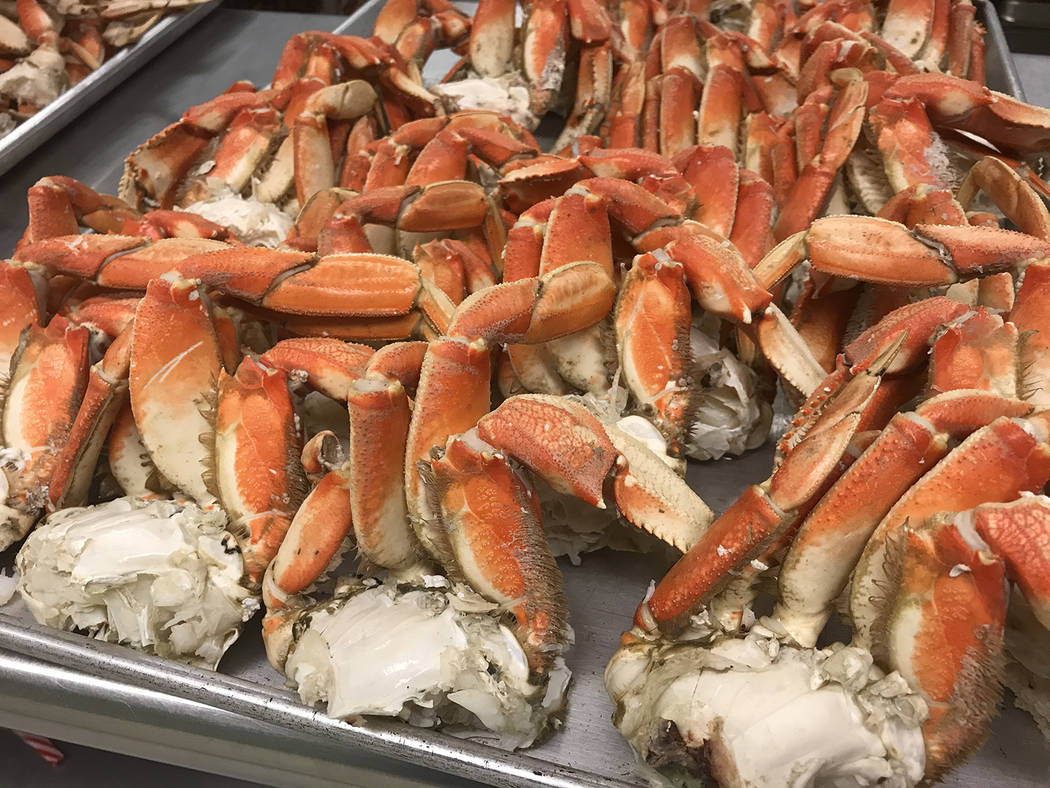 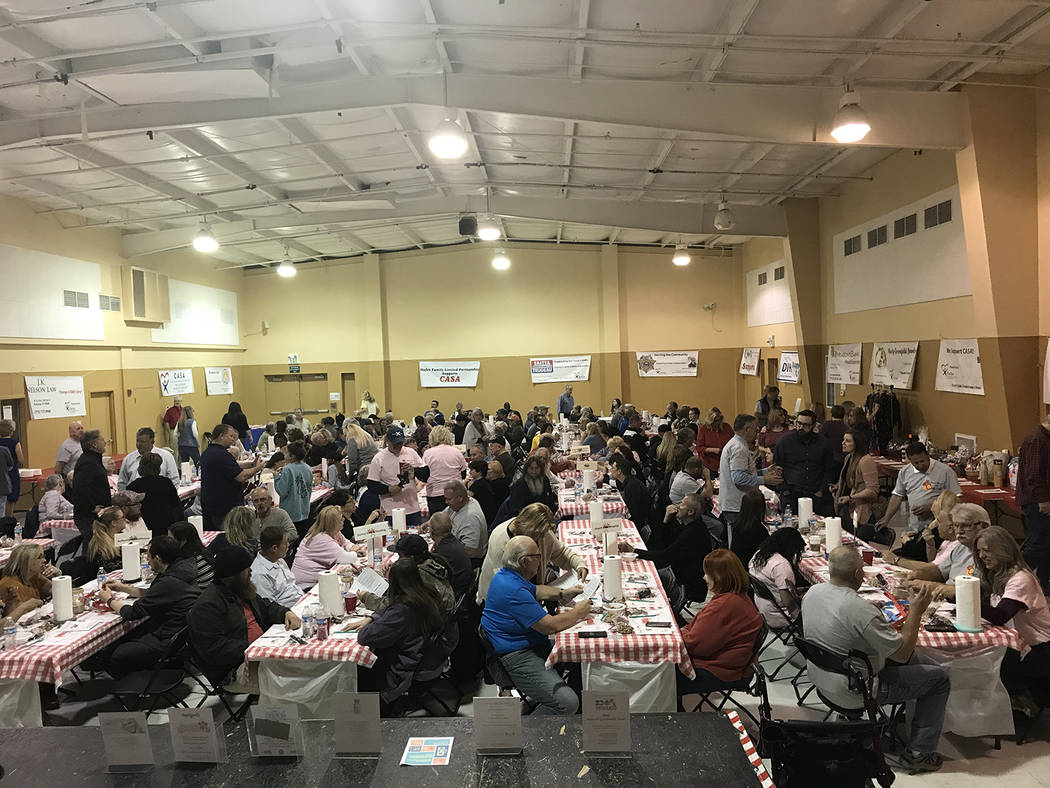 Robin Hebrock/Pahrump Valley Times A record number of attendees were out for the 9th Annual Crab Fest fundraiser, hosted by Pioneer Territory CASA on Feb. 15. 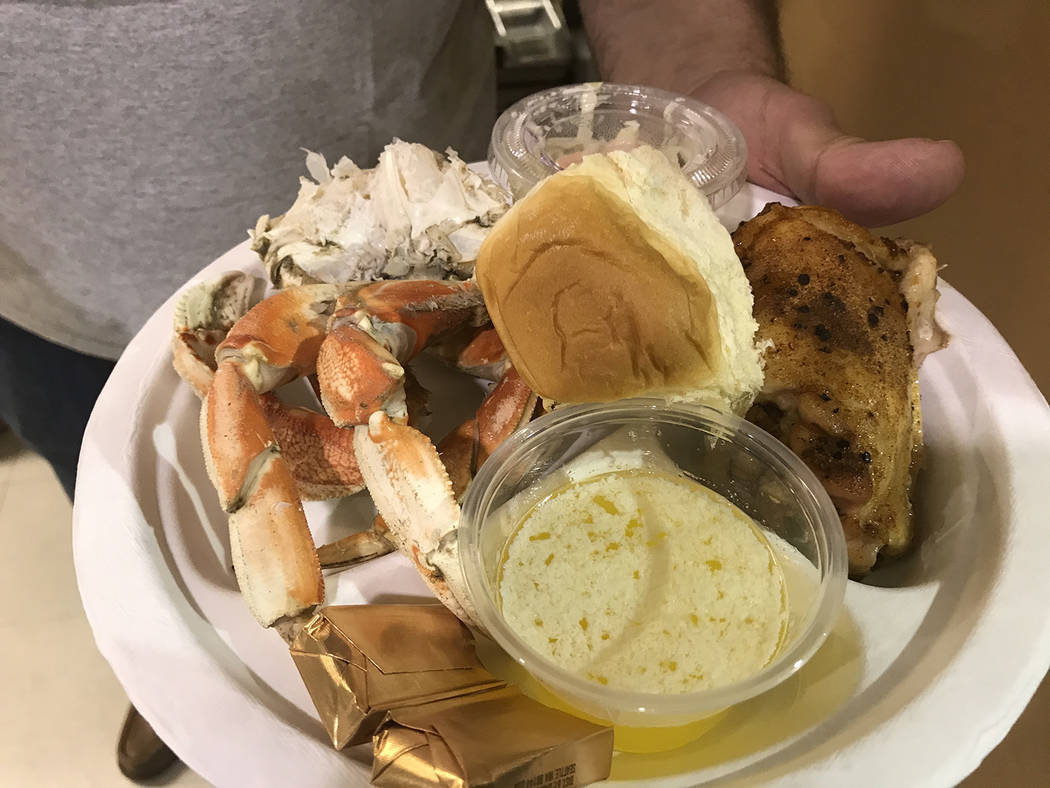 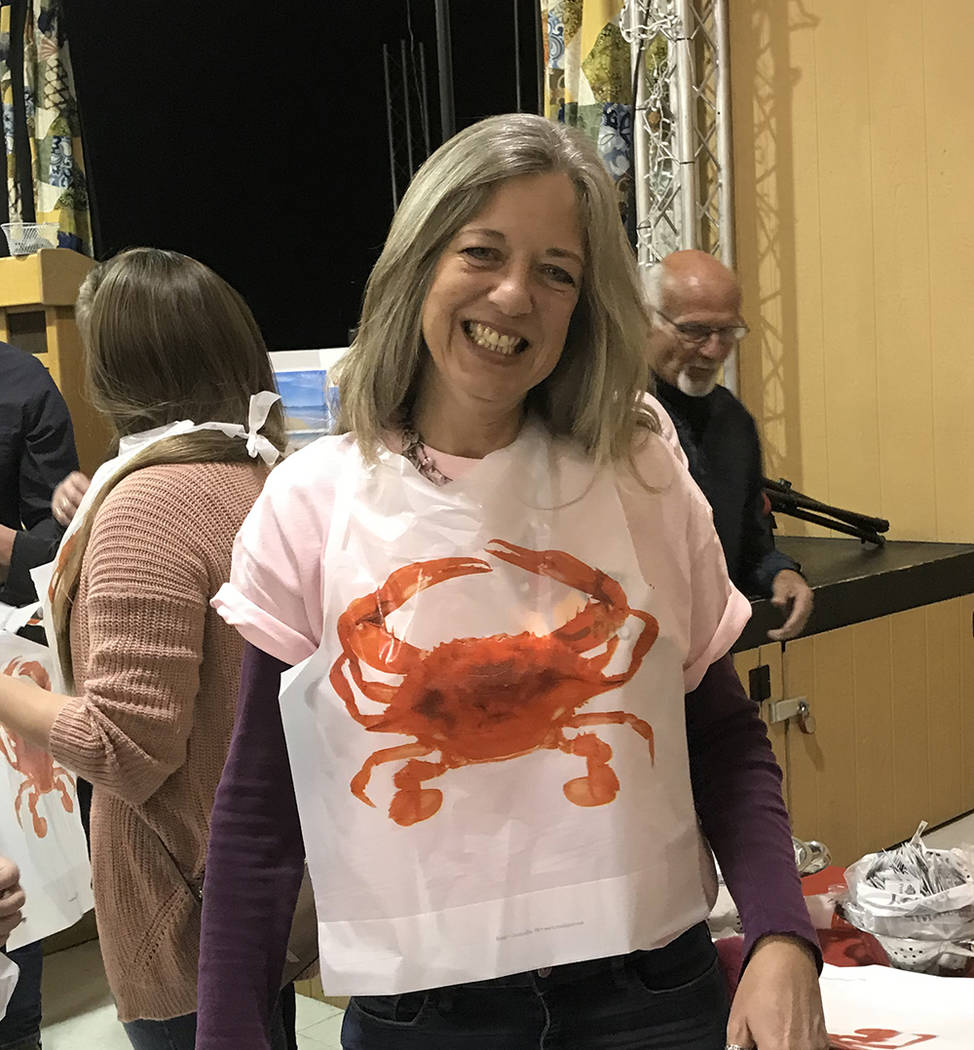 Robin Hebrock/Pahrump Valley Times Faye Burdzinski is pictured grinning from ear to ear as she donned her traditional crab-eating bib in preparation for the Crab Fest meal. 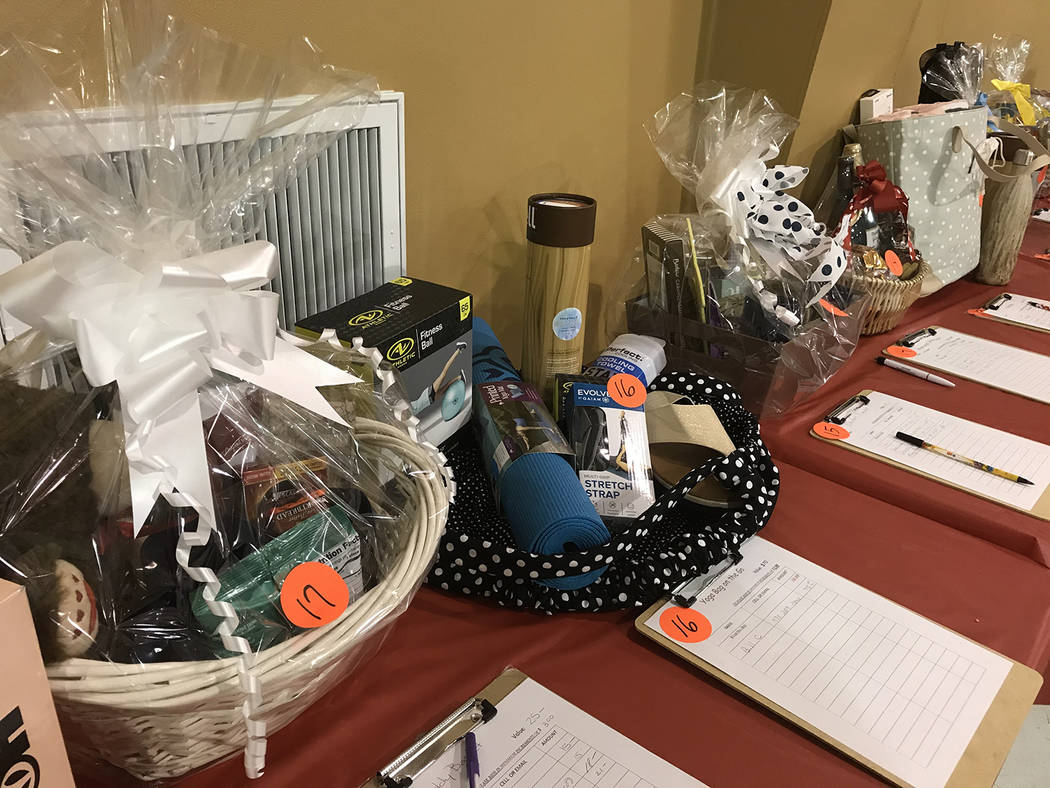 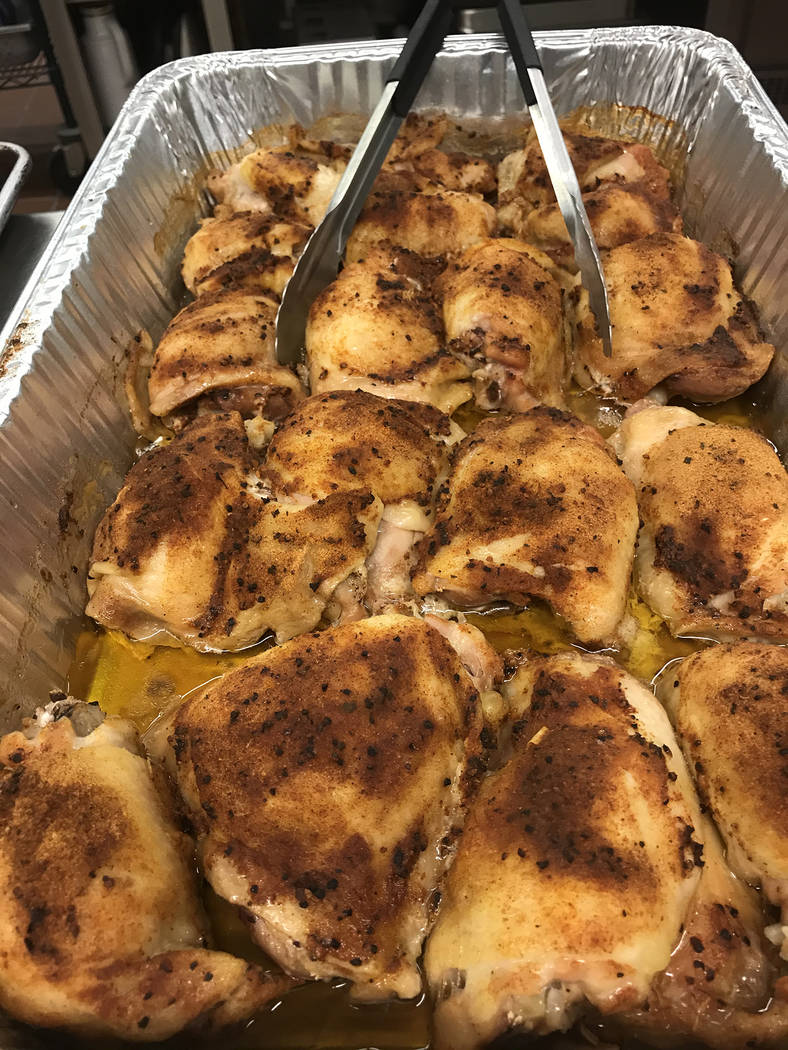 Robin Hebrock/Pahrump Valley Times Although the crab is definitely the star at Crab Fest, the roasted chicken is always a great supporting actor, drawing expressions of delight from feasters. 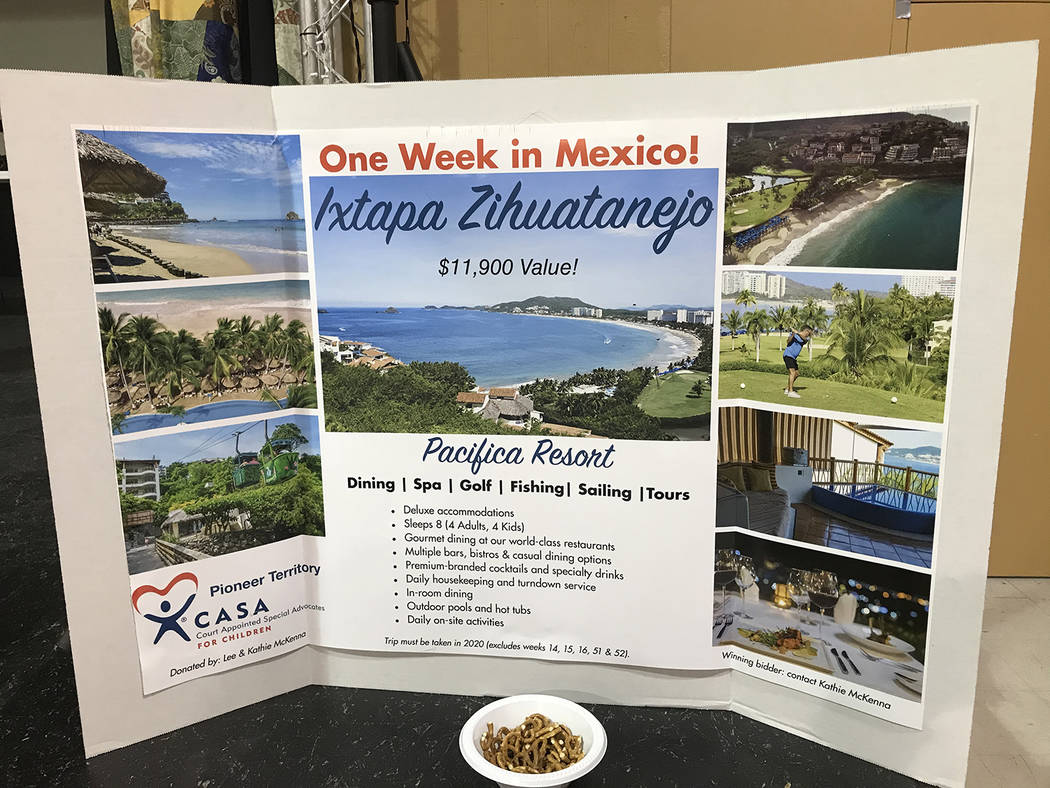 Robin Hebrock/Pahrump Valley Times A one-week trip to the Pacifica Resort in Mexico was the biggest prize of the night at Crab Fest.

Feasting, fun and fundraising were the focus of the evening on Saturday, Feb. 15 as Pioneer Territory Court Appointed Special Advocates host its 9th Annual Crab Fest, an event that saw the highest attendance in its history as well as an incredible, record-breaking $28,332 raised.

All of the funds generated at Crab Fest will now be used to support CASA’s sole mission and purpose, that of recruiting and training volunteer advocates who in turn provide a voice to children in the foster care system and help ensure that abused or neglected children can be safe, have a permanent home and have the opportunity to thrive.

Crab Fest kicked off at 6 p.m. on Feb. 15 inside the NyE Communities Coalition, which was absolutely packed with hungry event patrons all out to enjoy the crabby goodness while lending a hand to one of the valley’s valuable nonprofits.

As everyone began to settle in for the night, CASA Executive Director Kathie McKenna welcomed the crowd and thanked everyone for being there, before turning the microphone over to CASA Vice President and President-Elect Brian Kunzi.

Kunzi, an original founder of the Crab Fest fundraiser, then took a moment to recognize someone who plays a huge part in bringing the event together each year, Laura Oslund.

“Laura used to work for the coalition here and a few years ago, she decided to move away and took over the coalition in Elko County, which covers Elko, Lincoln and White Pine counties. So she has a big job up there but I have always been able to lasso her and get her to come back because we absolutely could not do this without Laura,” Kunzi told the crowd, which erupted in enthusiastic applause.

Moving on to the main reason for the occasion, Kunzi explained for the audience that the Dungeness crab they were about to devour was fresh, never frozen and bound to delight. To satiate the hunger of all those attendees, a total of 588 pounds, live weight, of Dungeness crab was purchased and flown in from Oregon the night before the event.

“The other thing I will tell you is, this is not a dainty sport. If you’re not sharing juices, you’re not doing it correctly,” Kunzi said to rousing laughter. “That’s just the way it is. You’re going to have stuff fly in your eyes and across tables and that’s OK!”

Following a quick card game to determine which lucky table would be able to attack the buffet of crab, chicken, beans, coleslaw and rolls, attendees began to don the traditional Crab Fest bibs and pile their plates high with delicious eats.

While the Dungeness crab was undoubtedly the star of the meal, several Crab Fest attendees were there to specifically enjoy the supporting actor of the event, roasted chicken, expertly prepared by Oslund.

Area resident Ryan Muccio told the Pahrump Valley Times, “The chicken is truly amazing. I don’t like crab, I don’t eat any seafood but this chicken that Laura makes is so good, it’s definitely worth coming out for. And of course, I love being here to support CASA, they do such wonderful work in our community.”

Over the remainder of the evening, the hundreds of pounds of crab and chicken was steadily depleted until all of the guests were stuffed to satisfaction. That was when the rest of the fun got started, with pick-a-prize raffles, a silent auction and a live auction presided over by professional auctioneers Ski Censki and Ron Gipson all adding to the excitement.

McKenna reported that there were 10 pick-a-prize raffles as well as 24 silent auction items and 15 live auction items, including the biggest prize of the night, a one-week stay at Pacifica Resort in Ixtapa-Zihuatanejo, Mexico, valued at over $11,000. The “Crab Net” was also a point of attraction for many, as was the “Shrimp Net”, both of which contained a variety of gift cards and certificates. The Crab Net contained 40 total items valued at more than $1,100 while the Shrimp Net was comprised of 23 items totaling $566 in value.

“I can’t thank the community more for coming out and supporting CASA and the children we serve! It was a fabulous event; great food, great fun and great company,” McKenna raved after all was said and done. “This was our largest event ever with 201 attendees!”

McKenna gave a shout-out of thanks to all of the sponsors, as well as all those who donated and of course, the attendees who purchased tickets and turned out in support of CASA. She also made sure to express her appreciation to the Hafen family for its longstanding support and ongoing commitment to CASA.

Turning its attention to the coming weeks, CASA officials are also encouraging those in the community to consider stepping up to become volunteer advocates themselves.

“We have 35 foster children in need of an advocate to be their voice in court. Can you spare two hours a month?” McKenna asked the community.

For those interested in making a positive impact in the lives of foster youth, the next round of training classes for volunteer advocates starts in March.

For more information on that process visit ptcasanv.org/volunteer/about-becoming-a-casa-volunteer. Applications can be completed online. Additional information can also be obtained by calling 775-505-2272 (CASA).