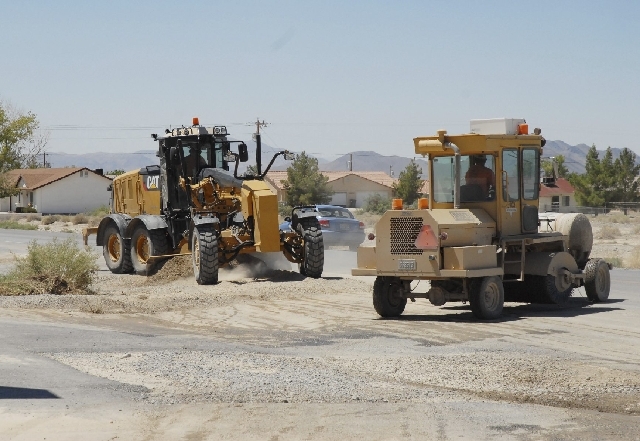 Nearly two weeks after a summer monsoon swept through the valley, road crews are still busy clearing local roadways of dirt and debris.

The National Weather Service in Las Vegas reported that the Pahrump area picked up anywhere from one half to an inch and a half of rain in a very short period of time.

“I was told that they are about 60 percent done. They are moving a lot of silt and debris from the roads. They have about three crews out there. One of them is up at the winery area while another team is working along Pahrump Valley Boulevard.

“They said they like to be proactive but it’s going to take about another two weeks to get everything cleaned up. They have completed most of the areas where people were calling in to report problems. Basically they got the bulk of it but they are going to keep at it until they get it done,” he said.

The lion’s share of the work is located on the south end of the valley where traffic along Homestead Road was forced to find alternate routes as they made their way about town.

Borasky said the actual composition of the waste presents a unique challenge for the clean-up crews.

“There’s a lot of rocks and silt. From what I understand the silt is very difficult to remove with sweepers and what not. On Highway 160 they have what are known as ‘Clam Shells’ which are those round reflectors and they have to be very careful around those. If they are not careful, they end up scraping them off of the roads. I remember the last serious storm that we had where the reflectors were ripped from the road when they were doing the cleanup,” he recalled.

Borasky noted that the county does have other agencies to help with the daunting effort.

“The Nevada Department of Transportation handles highways 372 and 160 all the way through town. The rest of it is the county’s responsibility,” he said.

The commissioner also said that there are only a handful of roads in town that the county is not responsible for.

“There are a few places in town where there are private roads. If they don’t belong to the county, we are not liable to clean them up. As far as other damage to county property, I have not heard any reports at all other than the Calvada Eye where we had that one tree blown over. There was a lot of silt and debris that washed in on Calvada Blvd. and the rain over-filled the duck pond and they had that area closed for several days so people wouldn’t get stuck in the mud,” he said.

Anytime Pahrump gets a substantial amount of rain in a short period of time, flooding is almost certain to follow.

Borasky said the issue of flood abatement has been discussed time and time again over the years but not much has been done to actually prevent what occurred late last month.

He said that this country’s costliest natural disaster in history put an abrupt halt to all of that roughly eight years ago.

“We have had a lot of the studies done at one time just before Hurricane Katrina hit in New Orleans. The Army Corps of Engineers were actually here putting together a plan to use federal monies to build some dams up in the Wheeler Wash area which would have helped tremendously. Unfortunately, when Katrina hit, all of the federal money went with it. We subsequently had another hurricane which took it again so there’s really not a lot to work with right now. We along with Las Vegas have already put in for whatever we can qualify for. We don’t have numbers yet,” he said.

Borasky did provide a glimmer of hope in terms of alternative methods of dealing with floodwaters in the Pahrump Valley.

“Any way of taking in rainwater means less of it will make its way down here. There’s a series of ‘catch basins’ above Higley Road which will someday be the bypass if it is ever built and we have a plan on that We have some dams up in Wheeler Wash and some other areas but I don’t see much in those. They will change the direction of the water and slow it down but coming down over that hill, I don’t think it’s going to do much good,” he said.

Darrell Lacy is the director of Nye County Community Development. He said costs associated with creating a comprehensive flood abatement project for Pahrump are in the stratosphere.

“We just don’t have the kind of money to create a flood program like they do in Las Vegas. We do have some plans to install some detention basins along the fan but those are very expensive types of things. It’s all about time and money and it would be a 50-year plan to get it all fixed. Dave Fanning and the public works group did a major study to try and address floods on a region-wide basis here. It would cost $300 million to embark on that kind of project,” he said.

Local residents in the area of Blagg Road between Basin and Irene had much to worry about at the height of the storm.

Several years ago, floodwaters forced the closure of the thoroughfare causing headaches for motorists and especially businesses in the area.

Borasky said this time around, the road held its own against Mother Nature.

“I had a call from a local resident there who gets quite upset anytime it rains but it didn’t take very long for the water to drain out and wasn’t too huge of an issue. It’s unfortunate the way that road was designed. It was designed by a former engineer that we had who is not with us anymore. For now we just have to live with it,” he said.