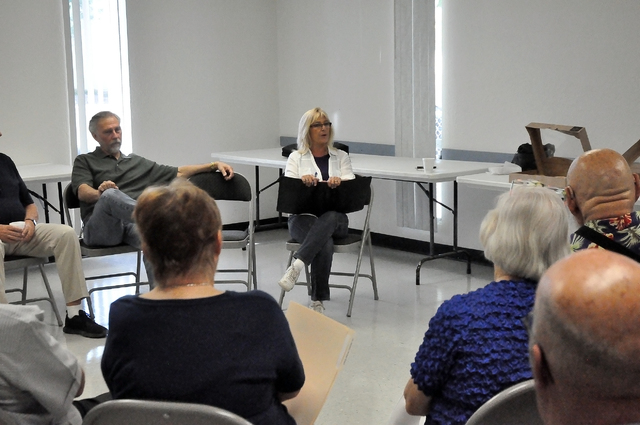 Coffee and Doughnuts with Commissioners and the DA was held on Saturday. Commissioner Frank Carbone and Nye County District Attorney Angela Bello discussed issues and answered questions. The event is held on the first Saturday of each month. Horace Langford Jr./Pahrump Valley Times

Pahrump residents didnt spare questions for Nye County District Attorney Angela Bello and Commissioner Frank Carbone on Saturday when the two sat down with a group of people at the Bob Ruud Community Center in Pahrump.

Former Nye County Commission candidate Louie DeCanio raised a question about appointing Pahrump Justice of the Peace Gus Sullivan. DeCanio argued that commissioners should either appoint another justice of peace or hold an election.

Nevada law says that the boundaries of Pahrump are permanent, he said.

Nye County commissioners in May adopted a resolution to temporarily merge the justice court townships of Pahrump and Beatty following the resignation of Pahrump Justice of the Peace Ron Kent on March 31. The move enabled Beatty Justice Gus Sullivan to cover the caseload in Pahrump through the end of Kents term in January 2019. Under the resolution, the consolidated Pahrump and Beatty townships shall again become separate in 2019.

To bring Gus Sullivan in here on a temporary basis, like on a couple days and a judge got sick, thats acceptable. But to bring him in here to fill the position, thats a 100 percent wrong, DeCanio said said.

Bello argued that the size of a township determines how many justices of the peace are required.

The whole county can be one township, it goes by population and that tells you how many justices of the peace you need. So, for anything 40,000 and up (people) you need two justices of peace, under 40,000 (people), you need one. Its the minimum and the maximum, its an absolute number, she said.

According to the state law, commissioners should appoint or elect justices of the peace, however Bello said that by merging the townships, officials eliminated the vacancy.

So, thats what was done in order to avoid the cost of the special election and avoid having a third (township), Bello said.

Bello also said that a lot of places around the country do not elect their judges at all. They are all appointed.

Many also voiced their frustration with the case of former Nye County Sheriffs Sgt. Michael Horn, who avoided jail by pleading guilty to misconduct of a public officer and possession of a controlled substance, both felonies.

Bello said the Horn issue is dead and cant go to court unless he violates his five-year probation.

Additionally, some said they were also frustrated with the guilty plea agreement in Timothy Ryan Treffengers case. Treffinger, who prosecuted criminal cases in Nye, Esmeralda, and Mineral counties for the state Attorney General, pleaded guilty to possession of a controlled substance following his arrest earlier on heroin charges.

Pahrump resident Andy Alberti said the case should have gone to public trial, but Bello defended the verdict.

I think he got the just thing. I think he has been punished appropriately, she said. For the drugs, he got punished like everybody else, five years probation. Hes got punished for being a cop, he has to go to a drug counseling, has to do all this stuff and and he has been stripped of his badge, he can no longer be a cop. I think thats justice… He was willing to plea bargain.

Its overbearing to see whats happening here. … And this has got to stop, he said.

Bello said she wants to hear suggestions on safety and how to reduce the cost of prosecution at the next meeting.

I think that we should talk next time about solutions for crime and we can talk about community prosecutors again, she said.

Coffee with the DA is held on the first Saturday of each month.