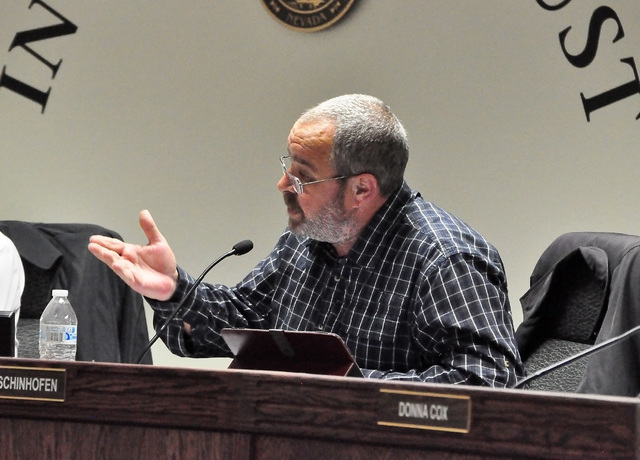 Nye County Commissioner Dan Schinhofen said he was concerned about how drug tests are done on the county’s employees. The commissioners decided to add the word “random” to drug screening in the county’s personnel policy manual. Schinhofen said the county has to come up with alternative methods of drug testing to make sure it goes beyond just positive. Horace Langford Jr./Pahrump Valley Times

Nye County Commissioner Dan Schinhofen and several other Nevada officials will testify to the Congressional Subcommittee on Environment and the Economy on Yucca Mountain.

On Thursday, the subcommittee will hold a hearing titled Federal, State, and Local Agreements and Economic Benefits for Spent Nuclear Fuel Disposal in Washington, D.C.

Schinhofen, the only Nye County official who will attend the meeting, said he was happy to be asked to address the subcommittee on benefits of Yucca Mountain.

Once again all we are asking for is that the federal government follow their own laws and let the science be heard by the NRC, he said. Nevadans deserve to hear the science after 30 years and $15 billion. How can we, as a state, say yes or no until it has had a clear and open vetting of to science to determine that it is safe?

Darrell Lacy, director of Nye Countys nuclear waste project office, said officials will discuss potential impacts to Nye County and mitigation and benefits that they would expect from the Department of Energy and federal government.

This is not a forum to argue safety issues or whether we want it or not but rather if DOE builds a $90 billion project in our backyard, how do we interact with them, what type of agreements do we need, what impacts will there be on the local communities and what type of impact mitigation and benefits are needed, Lacy said.

The Nuclear Regulatory Commission issued its final supplement to the DOEs environmental impact statement for a proposed nuclear waste repository at Yucca Mountain in May, concluding that the Yucca Mountain impacts on groundwater over one million years would be small. Nevada state officials called the report defective and said that the state is ready to challenge every conclusion in the 300-page document before the licensing board.

U.S. Senators Harry Reid and Dean Heller introduced legislation to prohibit spending Nuclear Waste Fund money on the construction of the Yucca Mountain until DOE enters into a legally binding agreement with the host states governor and affected units of local government (AULGs).

In March, Titus and State Rep. Joe Heck, R-Nev., introduced the Nuclear Waste Informed Consent Act, the House companion to the bill introduced by Reid and Heller. The act permits the NRC to authorize construction of a nuclear waste repository only if the secretary of energy has a written consent from the governor of the host state, AUGLs and affected Indian tribes.

Yucca Mountain is an unsafe site, the repository proposed in the DOE license application does not make it safe, the DOE program is broken, and most importantly, Nevada must have the same right to say no to this project that the BRC said every other state should have, Halstead said. The Reid-Heller legislation in the Senate and the Titus-Heck legislation in the House would do that. Nevada is not interested in talking about accepting economic benefits in exchange for an unsafe nuclear waste repository.