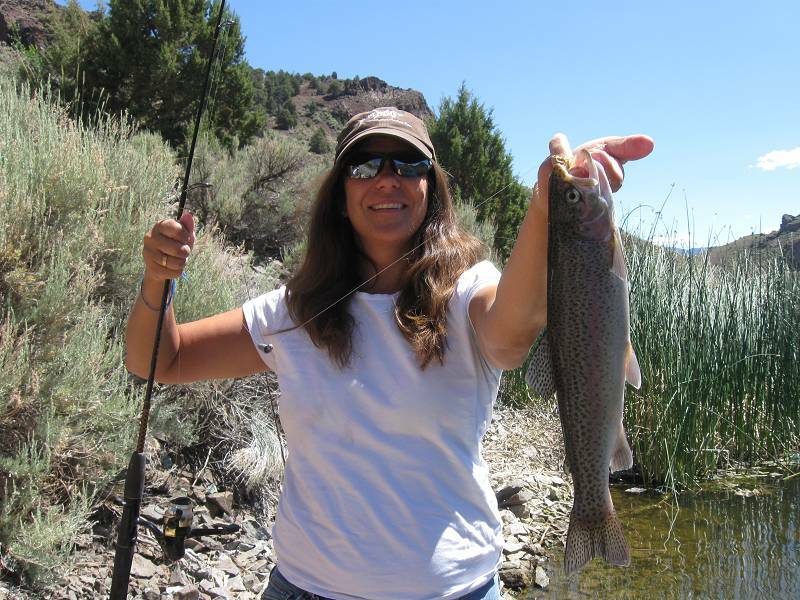 Special to the Pahrump Valley Times Anna Calvert with a nice desert trout; showing us that even though this is the desert, the fishing is still great. 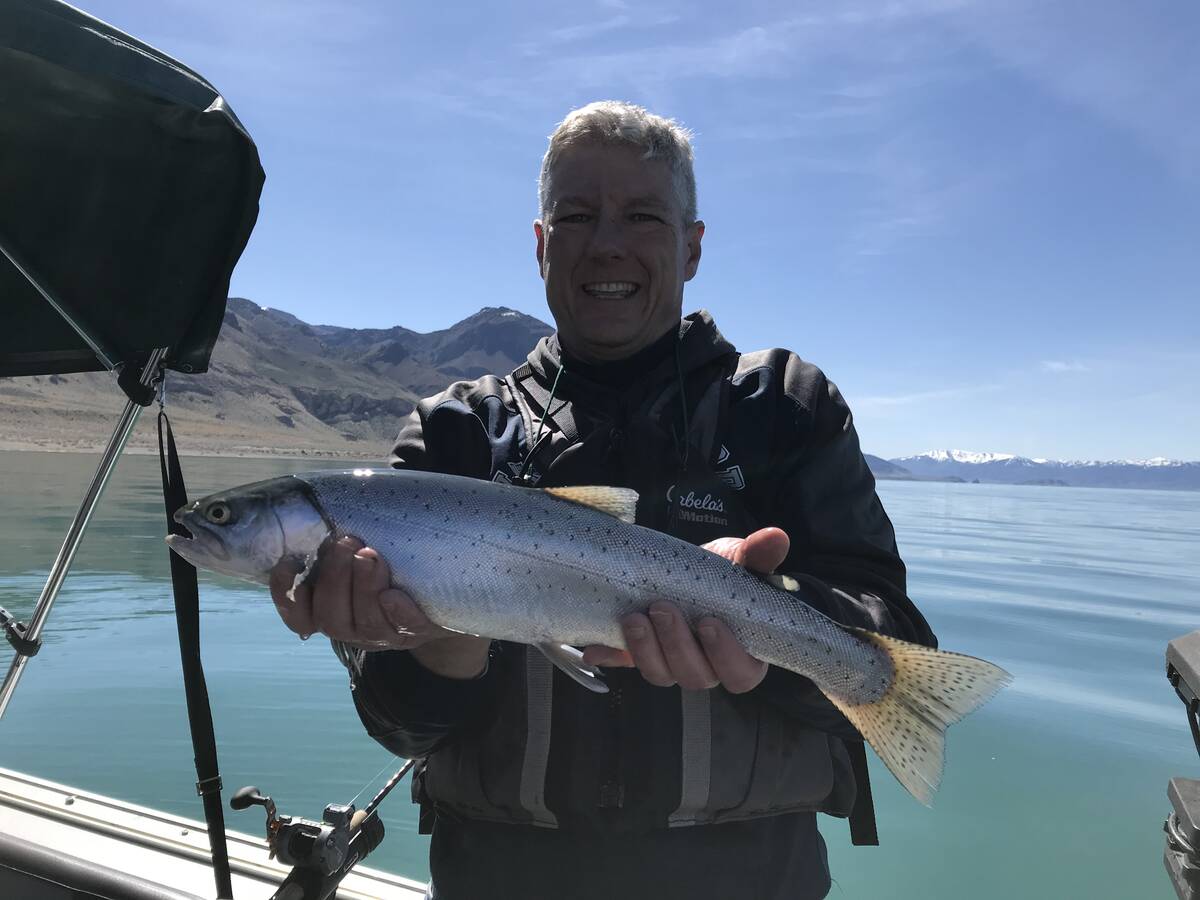 Special to the Pahrump Valley Times Mark Fiorentino with a Pyramid Lake Cutthroat trout he caught while on a fishing trip in northern Nevada.

My inclination is to say Alaska, Canada or Argentina or Brazil’s Amazon, but my routine answer is San Diego’s H&M Landing for salt water and Lake Mead, Pyramid Lake and Southern Utah for trout. ll make excellent weekend fishing adventures.

The evidence of spring is everywhere and life begins again. We see it in the flowers, which are now reaching into the alpine meadows; the animals are actually building nests and the young of the year are beginning to appear. Sportsmen are also becoming more active as thoughts of hunting tags and fall hunts are on our minds.

What do we do now? It’s time to fish; the die-hards have been at it since the beginning of April. They know the early season is the best. When the ice comes off the higher elevation lakes and streams, the hungry trout are solid and become active. It seems they’ll bite on anything, and competition from the “Summer Fishermen” is less.

All fishermen have their favorite “secret fishin’ spots” and I’ll share mine with you if you promise not to tell anyone else, it will be our secret. If not, stop reading here.

For years I’ve been sneaking off to Beaver, Utah, to fish the small lakes and streams in the area. A couple of my favorites are Minersville Reservoir at the lower elevation, and LaBaron at the higher, but all of this region’s waters are starting to see action. I hooked into my nicest fish while fishing from a rock outcropping at Minersville Reservoir, which is an artificial lure only body of water. A three-pond cutthroat was fresh and hungry; it repeatedly made runs for deeper water. My Rattlin’ Rapala not only enticed it, but held it fast. It eventually came to the net, deserved to fight another day, was released, and is still in the lake for you to give it a try, (if I don’t get back there before you).

Next, it’s on to Cedar City, Utah, and its unique redeveloped main street. Here you’ll find excellent fly-fishing shops, with local information on where the fish are and what they are eating. Oh yeah, there are also lots of ladies clothing stores, cosmetic boutiques and craft stores, for those so inclined to frequent such places. There is something here for the whole family.

My base for fishing the lower elevations in and around this area is the Holiday Inn Lodge at the south end of Cedar City, but if I’m heading up to the higher elevation lakes and streams I stay at one of the cozy cabins.

Panguitch, and Kolob lakes are hard to beat. They’re at a higher elevation and just starting to see action, but there are many other lakes and regular fishing reports on line (at wildlife.utah.gov). The campsites and lodges are a major justification for fishing the area, as if big trout aren’t enough. So, when you’re thinking of getting away from our desert valley’s heat, south-central Utah could be the answer. But remember, it’s our secret.

In California, June Lake and Convict Lake in the Sierras both experience an exceptionally good early season and are two worthwhile places to fish and visit.

Nevada has always been the land of legends, mysteries and adventures. When it comes to fishing it’s no different. My favorite is Pyramid Lake, with the possibility of catching 20-pound Lahontan Cutthroat Trout; my best is 12 pounds, but I’ll keep trying. The legends and mysteries you’ll find on line.

I’m getting good reports from Reno area lakes; Topaz Lake, and Pyramid Lake are productive during the early season. They slow down a bit as it gets warmer, but are always a good fishing destination.

So, when your friends ask about fishing spots in Nevada you can let them know we’re doing just fine. But, then again, you may just want to leave that our secret.

Another great reason for fishing and hunting travel though, is the possibility for chance encounters with interesting and like-minded folks. A recent trip was no exception. I met a gentleman who was introduced as Ol’ Rick. Through him I met his father, “Daddy Dick”, who shared this story:

“It was 1932 in Buckeye, Arizona. I was 12 years old and sitting on the stoop of the post office, playin’ hooky from school.

This great big black car came up the dirt main street and made a quick stop, causing a great cloud of dust. A man rolled down the window and said, ‘Hey boy, do you know where I can find the white wings?’ Knowing he was referring to the white-winged doves around the alfalfa fields, I replied, ‘yep.’

I took him to one of my favorite spots where he and his friend began shooting more doves than I could count. These were the days before daily limits, and heck, we had thousands of birds on the place eating up the hay. They shot until the barrels got hot, and they both shot well.

Now, I had a nice single-shot 20-gauge my dad had given me, but these were the fanciest guns I had ever seen. They were shiny, engraved with gold and must of cost a lot of money.

When they finished shootin’ we went back to town where I ‘breasted’ the birds, got some ice from the old ice shack, and put them in a cotton pickin’ sack. When I finished, the guy gave me 10 dollars, a lot of money in those days.

As they were leaving I asked, ‘Hey mister, what kind of a car is that?’ He replied, ‘It’s a Stutz Bearcat, and my name is Clark Gable’.”

This is what traveling is all about. The fishing was good, but the people you meet along the way make it better. Thanks, Rick; you made my trip with lasting memories and I look forward to the next one. Where will it be? Who knows, but it will be soon, that’s for sure.

Now it’s your turn; good luck, good fishing, be safe and get out there.

Dan Simmons is a freelancer writer in Pahrump.