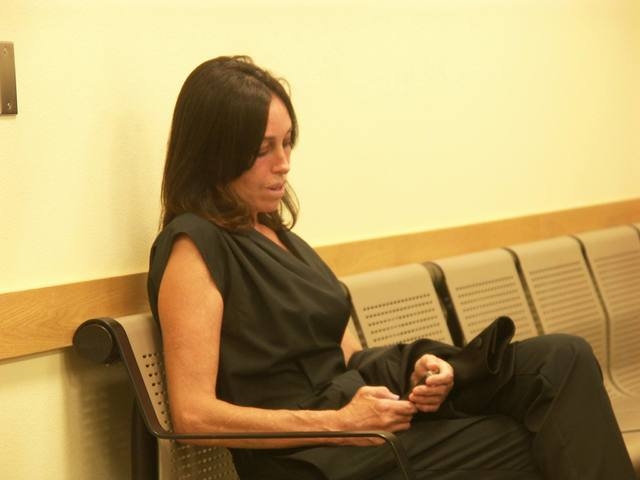 Heidi Lynn Fleiss will go to trial in September after pleading not guilty to a pair of felonies stemming from 2013 drug charges when police recovered nearly 400 marijuana plants at her residence.

The 48-year-old, former Hollywood madam appeared in District Court on Friday and entered not guilty pleas to the felony charges of opening or maintaining a place for unlawful sale, gift or use of controlled substance, and one count of possession of a controlled substance.

Wanker, concerned that Fleiss was under the influence in the courtroom, asked if the defendant understood what was going on in court.

“Yes. Jason (Earnest) has a plan for me,” said Fleiss, referring to her attorney.

Fleiss is out of jail pending the trial.

Nye County Sheriff’s deputies were dispatched to a location on East Fort Churchill Road on Aug. 7, 2013 in an attempt to arrest a wanted person.

When deputies arrived, they did not find the suspect but reportedly saw that a front door was open and no one was responding to the deputies’ presence.

As deputies and narcotics detectives made their way to the front entrance of the residence, they reportedly observed a female appearing to walk quickly away from a separate residence toward the rear of the property. The female was identified as Fleiss.

After obtaining permission from Fleiss to search her residence, detectives noted there were several other plants on the floor covered in soil in the separate residence.

After Fleiss was given her Miranda warning, she reportedly admitted to growing marijuana for a cooperative located in Las Vegas.

However, when asked to provide specific information about the cooperative, Fleiss was unable to do so in order to support her statements.

Fleiss continued explaining that she was attempting to destroy the smaller plants located in the separate residence because she told detectives she was growing too many plants.

Fleiss granted the sheriff’s office, without a search warrant, permission to collect the evidence and dispose of all the marijuana grow apparatus.

Detectives and deputies reported a total of 392 suspected marijuana plants located in and around the property.

Detectives did not arrest Fleiss because she reportedly had approximately $200,000 worth of exotic birds in the residence and she cooperated with the investigation.

However, just over a day before Fleiss was to appear in court on the marijuana grow operation, she was arrested in an early morning stop and charged with being under the influence of a controlled substance, DUI drugs, and other charges.

Fleiss was also pulled over on Oct. 22, 2013 at 3:30 a.m. after deputies reportedly observed her vehicle driving erratically.

When deputies made contact with Fleiss, they subsequently learned that her registration was suspended and she did not have a license.

According to the Nye County Sheriff’s Office, detectives stopped Fleiss, who was driving a 2010 Toyota FJ Cruiser, on State Route 160 after a records check revealed her registration was suspended and she did not have a valid driver’s license.

A declaration of arrest in the case notes Fleiss nearly backed her vehicle into the arresting detective on scene before exiting the car.

During a search of her vehicle, police reportedly discovered four ounces of marijuana and about $10,000 in cash, which they seized in connection to Fleiss’ arrest.

No court date has been set for those charges.