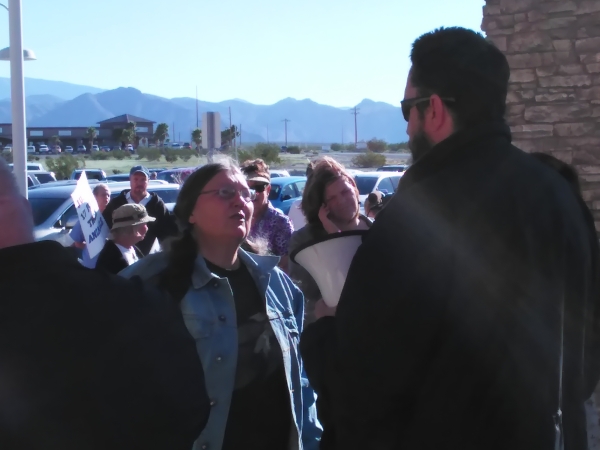 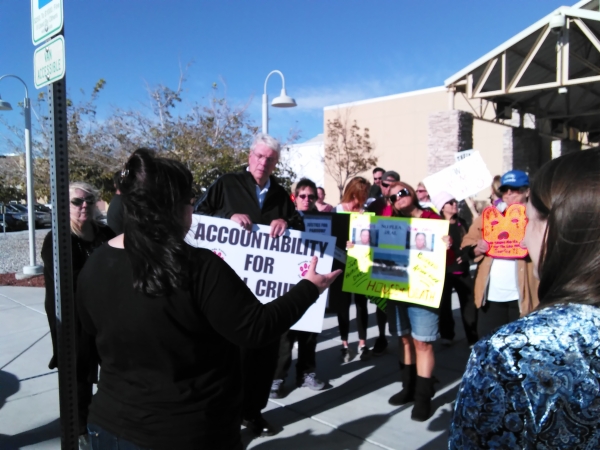 A collective sigh of relief was overheard in the audience just minutes into Monday’s court hearing for Diane Davis, the woman charged with first degree arson, resulting in the deaths of 17 dogs at her residence more than two years ago.

The hearing was a calendar call to determine whether prosecutors and defense attorneys were ready for trial.

During the proceeding, Davis’ defense attorney Paul Adras surprised the courtroom when he told Judge Robert Lane that Davis declined to accept the prosecutor’s plea deal.

In an amended complaint, prosecutors offered to drop the original 17 counts of animal cruelty if Davis agreed to plead guilty to one count of first degree arson.

“Your honor, with respect to this case, there have been recent discussions regarding negotiations,” Adras said. “In discussing this with her, she has decided that she will reject the plea offer.”

The case has generated much interest among area animal rights activists when they learned prosecutors had offered Davis a plea deal.

Nearly two dozen animal rights supporters gathered at the entrance of the courthouse early Monday voicing their opposition to a plea proposal.

Resident Robert Wanneberg, who helped to organize the rally, called for prosecutors to try Davis in court, rather than allow the defendant to accept a plea deal.

“Each felony animal torture charge is not on the amended complaint,” Wanneberg said. “There’s only one count of arson. We are here to make a statement that the Pahrump community has a large animal base and wants justice for the animals who died. We are talking about a lady who committed arson where she burned her house down with 17 dogs inside that perished in the flames.”

Davis’ hearing also got the attention of Gina Greisen, president of Nevada Voters For Animals, who traveled from Las Vegas to attend the 7:45 a.m. rally.

Following the brief hearing, Greisen said she and fellow animal rights supporters were happy with the outcome.

“We are elated that she didn’t accept the plea deal,” Greisen said. “The plea deal would have dropped all of the felony animal cruelty charges and we thought that was very unfair. That would have been a travesty of justice. At this level, Diane Davis and I agree that this case needs to see the inside of a courtroom.”

Resident Jason Harper, holding a bullhorn, said he was shocked to hear of the offer prosecutors made to Davis, but relieved she rejected the offer and chose to be tried in the case.

“I think that she should get the most severe penalty possible under Nevada law,” he said. “What she did was a shameful and cowardly act and she needs to step up and pay for what she has done. I have talked to people who were there on that fateful day and it’s hard to say what could have prevented this incident.”

Roughly 20 minutes prior to the hearing, Davis, while approaching the entrance of the courthouse, heard the wrath of the animal rights activists as she made her way to the doors. She briefly exchanged barbs with several individuals holding protest signs, where she proclaimed her innocence.

Following the hearing, Davis said she chose to use the main entrance of the courthouse even though she was met with a gauntlet of protesters.

Davis also said she disputes what the original arrest report stated about the events which occurred.

“I’ve been accused of setting my house on fire in 2013, and there were dogs that perished inside but not all 17 perished,” she said. “The sheriff’s report said 17 but if you count the ones in that grisly picture that they took, it was actually 12. I don’t know how the fire started.”

Davis noted she was devoted to her animals, which she referred to as “her children.”

“These dogs were my kids and we lived together, we played together, we celebrated birthdays and took pictures with Santa Claus,” she recalled. “We’ve done Easter egg hunts and everything that you would do with two-legged kids. It was an accidental tragedy and the fire started in the back of the house and I was nowhere near that area. I don’t know how the fire started. The prosecution has offered me several plea deals before this point but I have turned them all down.”

Additionally, Davis said the entire ordeal has affected her health as well.

“I have been diagnosed with PTSD and I usually see my therapist once a week but she’s on vacation right now,” she said. “It has been tough these past two years and it hasn’t helped that back in 2013, the Pahrump Valley Times had me tried and convicted before I ever had a day in court.”

Wanneberg, meanwhile, said he believes an online petition urging prosecutors to withdraw the plea deal may have attracted additional interest in the case.

Individuals from parts of Europe signed the petition.

“We had the petition online and in six days it had gotten over 1,700 signatures worldwide, to bring justice for these animals,” he said. “The problem is the animals cannot speak, so we have to speak for them because there is no advocate when these types of things happen and this is happening way too often. We are just asking that she is held accountable and brought to justice through the court system.”

Greisen noted that many animal abuse cases can often lead law enforcement to other instances of abuse and neglect.

“Animal Cruelty is like the canary in the coal mine,” she said. “If you can see there is a form of neglect or abuse on an animal in someone’s yard, it’s very likely you’re going to find neglected children or elderly abuse as well. These issues need to be taken seriously so we can prevent other crimes against humans.”

Davis’ decision, according to Adras, prevented him from preparing a defense for Davis.

“I am not prepared to proceed with trial,” he said. “I lost that trial preparation time at this point and I cannot be prepared to go to trial on Dec. 7, when the trial was scheduled.”

According to the Nye County Sheriff’s Office, deputies responded to the property in July of 2013 for a report of a female wanting to commit suicide.

As officers began making their way to the address, they were further informed the woman, identified as Davis, had barricaded herself inside the home with a firearm and several of her dogs.

When police arrived on scene, deputies could see Davis through a window in the home with a gun in her hand, refusing to exit the residence.

As officers continued trying to convince Davis to exit the home, Davis reportedly fired a single gunshot inside the residence.

Soon after, police noticed what appeared to be a fire in a back room of the residence.

The flames produced heavy smoke conditions, which eventually forced Davis to leave the residence with her gun in hand.

Deputies immediately gave Davis commands to put the gun down, but she allegedly refused and began trying to make her way back inside the burning structure.

As she allegedly continued to ignore police commands, an officer on scene tazed Davis, causing her to drop her firearm and allowing police to restrain her.

Pahrump Valley Fire Rescue Services were also called to the scene to deal with the fire.

Crews had trouble accessing the fire, due to an overabundance of personal items inside the home, some of which were being used to barricade the doors shut, according to deputies.

Once the fire was extinguished, an investigation revealed Davis had intentionally set the fire that claimed the lives of 17 of her dogs inside the home.

After she was treated for smoke inhalation at the scene, Davis was placed on a Legal 2000 hold and transported to the hospital for further care.

Several horses and other animals were removed from the property by Nye County Animal Control following the fire.