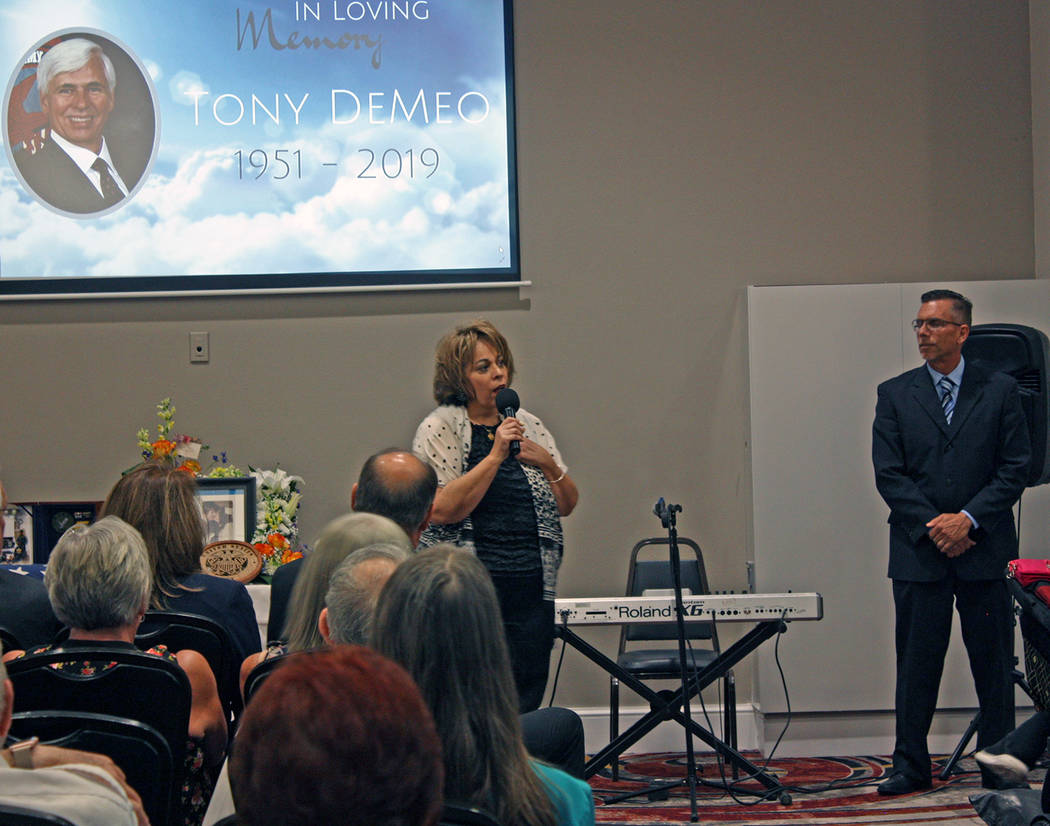 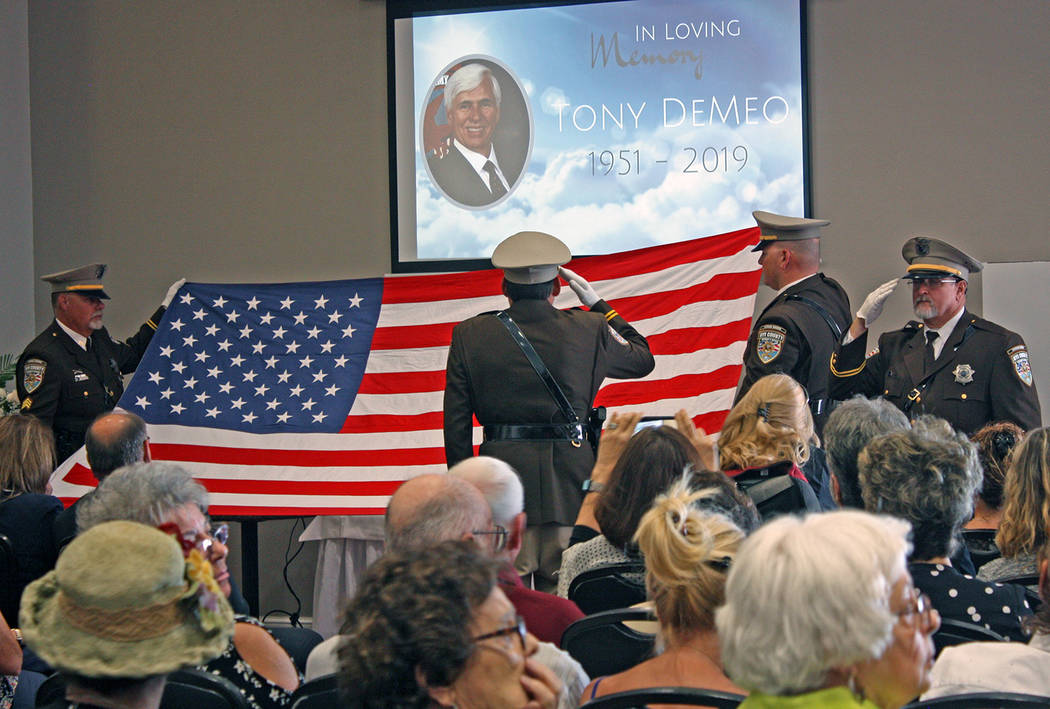 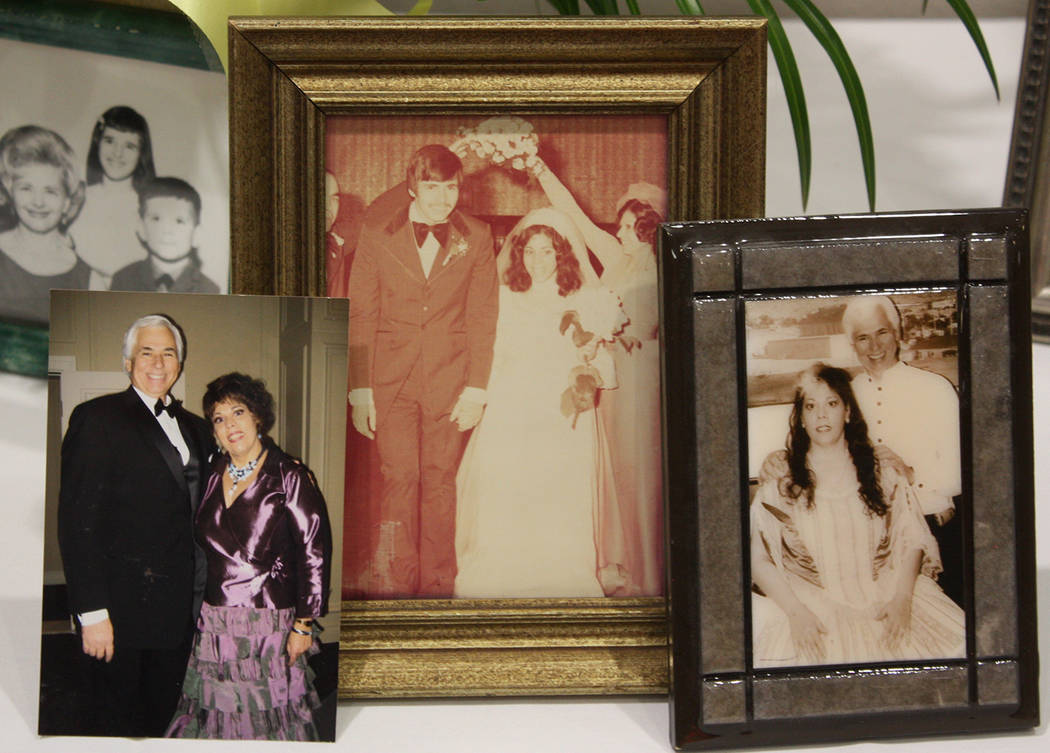 Robin Hebrock/Pahrump Valley Times Photographs of Tony DeMeo and his wife Linda were on display during DeMeo's memorial service, held at the Pahrump Nugget. 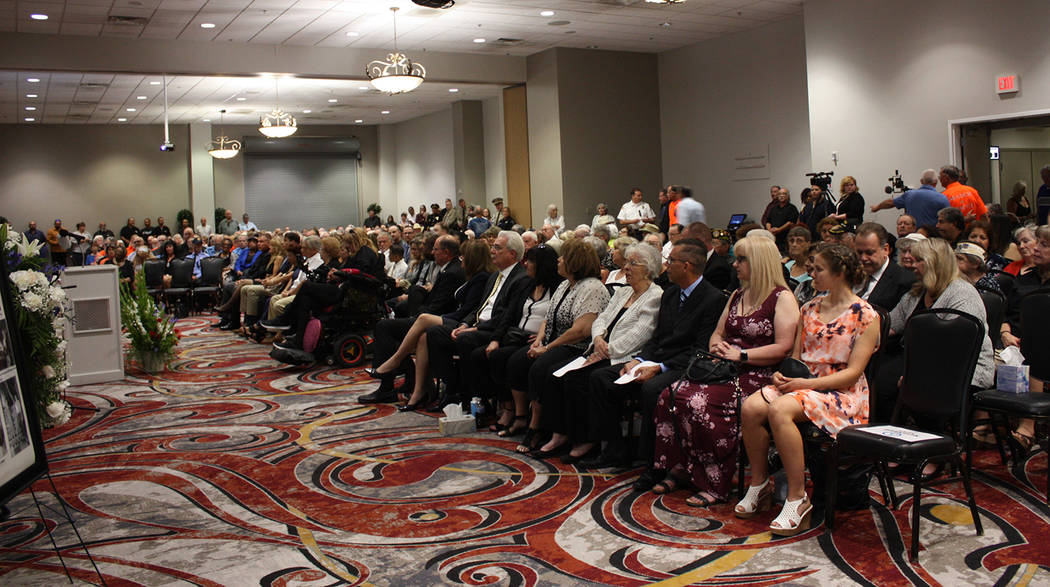 Robin Hebrock/Pahrump Valley Times The family of Tony DeMeo filled the first row of seats at his memorial service, with hundreds of others packing into the venue to show their love and support. 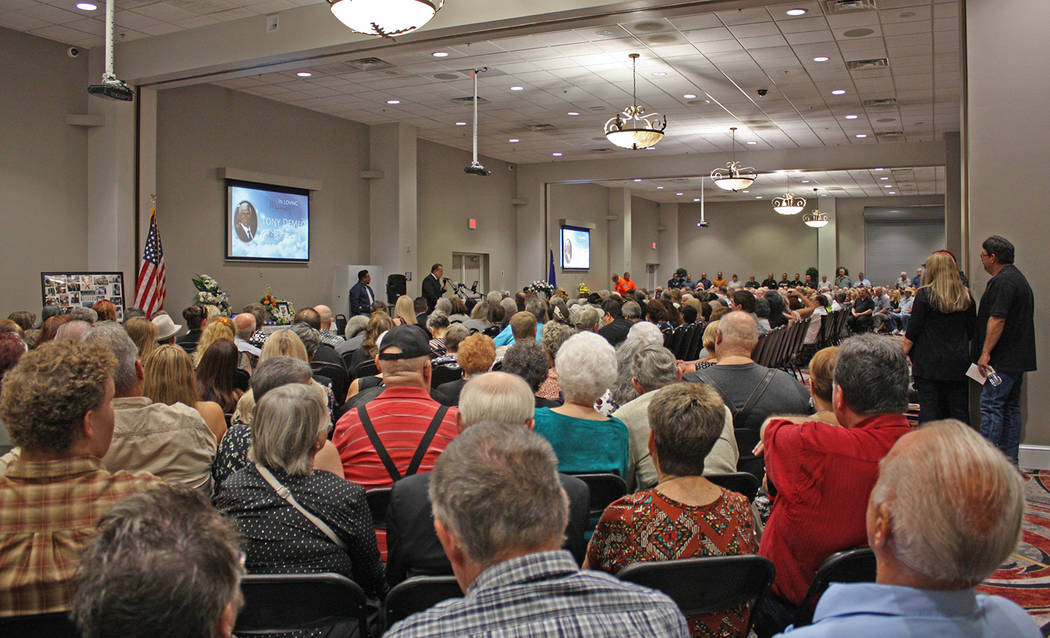 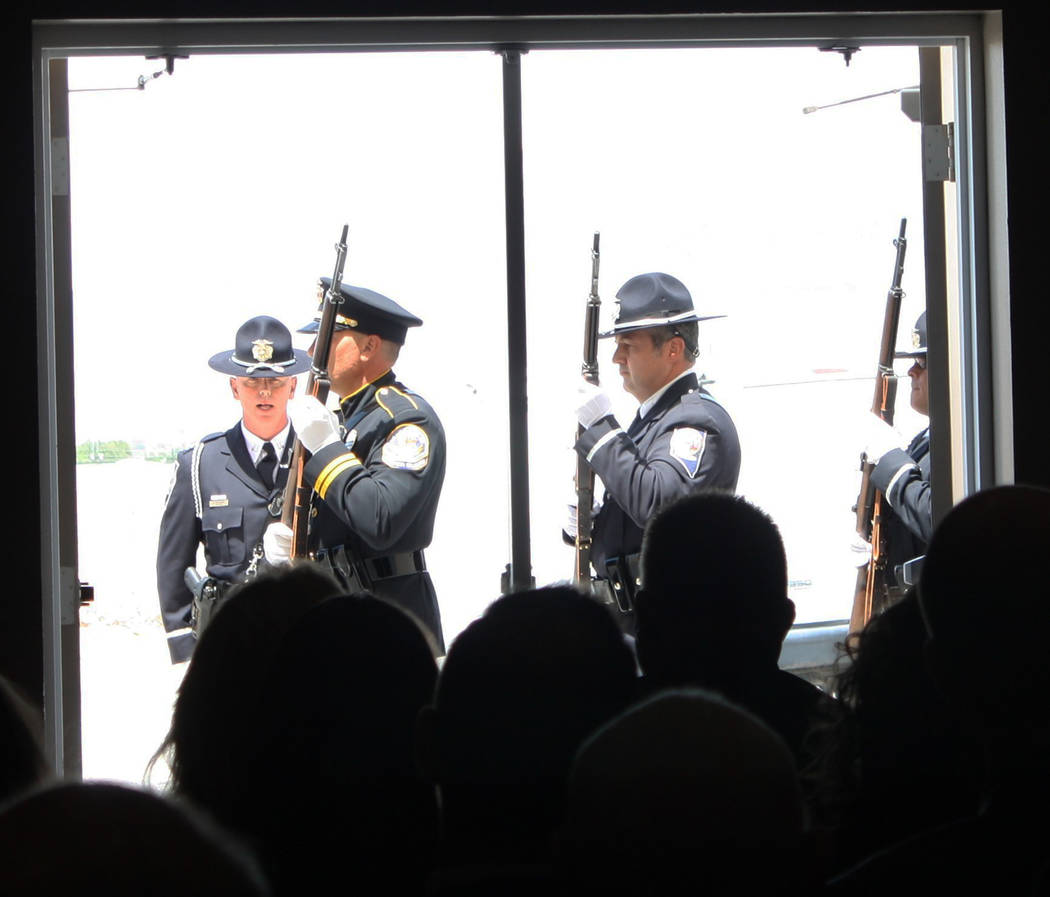 Robin Hebrock/Pahrump Valley Times A 21-gun salute was included in the ceremonies that took place during the Tony DeMeo memorial service. 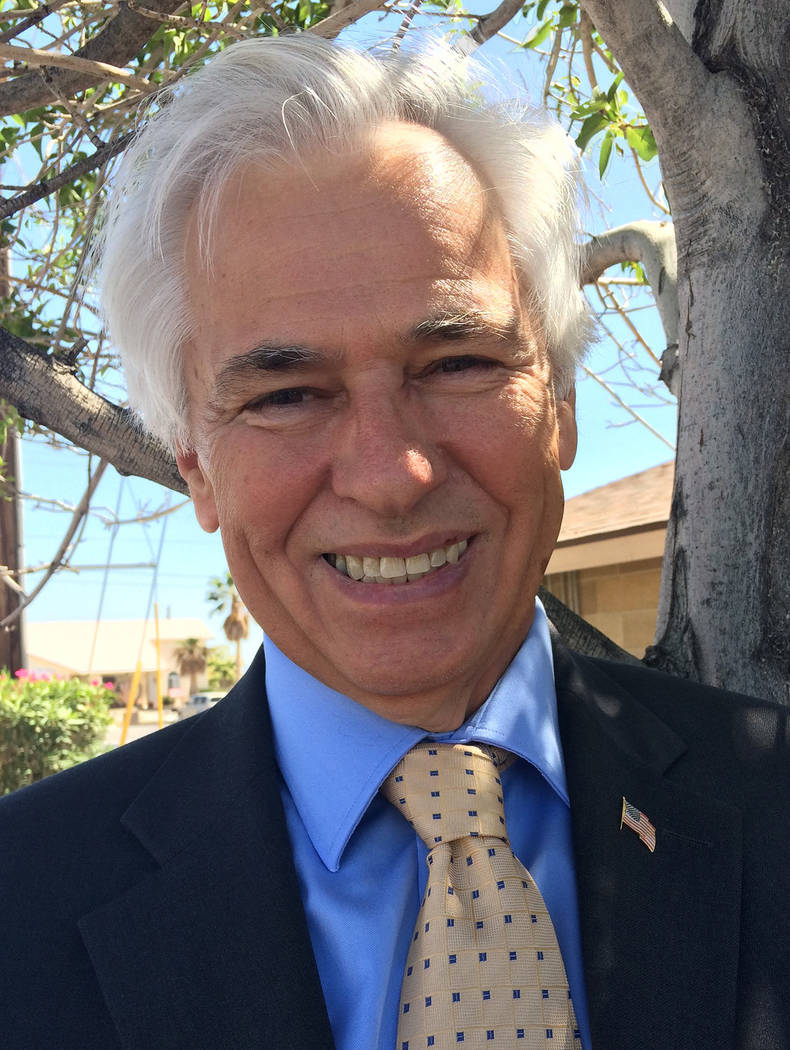 In a solemn and moving ceremony that drew together an enormous crowd of mourners from all walks of life, the memory of former Nye County Sheriff Tony DeMeo was honored at a memorial service hosted last Saturday, Aug. 3 in Pahrump.

As a man who made a big impact not only in Nye County but all the way across the country in New Jersey as well, DeMeo’s memorial service attracted hundreds and hundreds of people, each holding their own special recollections of their experiences with him.

Over and over again DeMeo was described as a kind, generous, loving individual who was committed to making the communities he served a better place and his loss weighed heavily on the hearts of those who will miss him. There was grief, yes, but also the comfort of having hundreds of people come together to honor the life and legacy of someone who touched the lives of so many.

Opening the ceremony on August 3 was Calvary Chapel Pahrump Valley Assistant Pastor Josh Serrano. “Thank you so much for coming to support Linda and remember Tony, the service he shared with this community and how he poured himself out to protect this town but also the husband he was, the father, the uncle, the son… Just remember the impact that Tony had on your lives,” Serrano said.

While even more attendees continued to file into the already near-capacity venue for the service, Geri Atkins played for the crowd, followed by two young ladies named Yesenia and Kayla who added their voices to songs of worship.

Once the throng of attendees was finally settled, Clyde Banks, a former fellow New Jersey police officer who had known DeMeo for several decades, took to the microphone as the first speaker. He reminisced about the time he spent working with and for DeMeo in Jersey City and the many accomplishments he had achieved while working in that city. Banks also recalled when DeMeo and his wife Linda DeMeo first began a relationship, remarking that the two were utterly perfect for each other.

“Tony loved Linda with all his heart. He would talk about her often. He would speak as to how she supported him in every wild idea, and believe me, he could spend many days on his wild ideas,” Banks said, drawing chuckles from the audience. “Tony was many things to many people but to me, he was my mentor, my friend. He was the best man at my wedding and Linda was my wife’s maid of honor. But most of all, Tony was my brother.”

Former Nye County Sheriff’s Office Assistant Sheriff Rick Marshall was asked to speak as well, telling the audience, “His will always be remembered as a life cut too short, a husband, a friend, a mentor, a police officer and sheriff who had so much more to give… What we are left with are the memories, moments shared, lives touched and friendships that were forged… We say things like tragic, heart-wrenching, sad. Those are terms that don’t even begin to describe what has happened.

“Tony had all the characteristics of a perfect law enforcement officer,” Marshall continued. “His ethics, his integrity, doing the right thing even when no one was looking. He was dedicated to the communities that he served.”

Tony’s brother, Lou DeMeo, and sister, Matty McMurran, both spoke about growing up with Tony, watching his journey from a boy to a man.

“Tony was a quiet and reserved child but was happy watching sci-fi shows or studying outside. These qualities served him well as he was an excellent listener with a generous and thoughtful manner. As a boy and an adult he was genuine, never fake. He was honest, humble and proud,” McMurran said.

She detailed his life as member of the U.S. Navy before retiring and eventually making the decision to enter the profession he would pursue for the remainder of his life, law enforcement. “Tony was a man who loved to serve,” McMurran stated. “He would want to do so and he successfully served three terms as sheriff of Nye County. He put his heart and soul into this community as he loved the people here and he felt it was his sacred duty to keep this county safe.”

“He truly loved Nye County, he truly loved his community and I have to say that he was probably one of the most dedicated guys I will ever know in my lifetime,” Lou said.

Longtime family friend, Lu Komorowski, remembered Tony’s friendly and open nature and how he had immediately welcomed her and her husband when they had moved to town nearly 20 years ago and Linda’s mother Mara Sarkisian Fanok told the audience that if she were to choose one word to describe Tony, it would be “gentle.”

The last to take to the podium and address the crowd was Tony’s widow Linda, who, while obviously emotional, was nonetheless grateful for the outpouring of support for her family in their time of tragedy.

“My husband loved this community, he loved all of you. He loved it from Pahrump to Round Mountain to Sunnyside, Tonopah, Beatty, you guys were the best and you’re not going to stop seeing me. I am still going to be there,” Linda said. “Tony served. Tony loved his communities. He loved people, he loved Jesus Christ, he wanted to do good. He loved you all and I love you all. I thank you from the bottom of my heart for the love that you have given to my husband, to my mom and to myself.”

The memorial service came to a close with a flag ceremony conducted by the Nye County Sheriff’s Office, a 21-gun salute and a rendition of “Amazing Grace” performed by a bagpipe troupe.