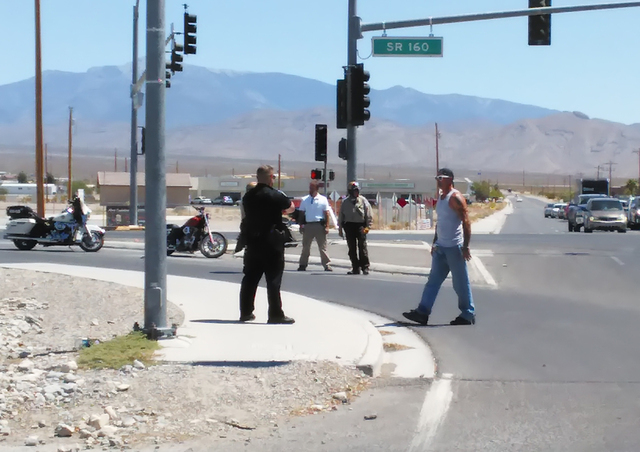 Nye County Sheriff’s deputies have witnessed an increase in suspects suffering an Agitated Chaotic Event, which is characterized by extreme agitation, distress and mania, usually brought on by possible drug use. Selwyn Harris/Pahrump Valley Times

In recent days, Nye County Sheriff’s deputies have witnessed an increase in suspects exhibiting extreme agitation, distress and mania, usually brought on by drug use.

Known as an Agitated Chaotic Event, or ACE, it can pose a danger to officers and emergency personnel, people in the area, and the suspect themselves. It an also cause sudden death in some cases.

Now deputies are receiving training that will help them, along with other emergency responders, assess, capture, control, restrain, sedate and transport throughout this medical emergency, which can be life threatening.

On Monday, sheriff’s deputies were summoned to Desert View Hospital where witnesses said a woman was acting oddly and irrationally.

Upon their arrival, the woman admitted to using methamphetamine earlier that day.

As she was placed under arrest for illicit drug use, the woman, according to deputies, began screaming incoherently and yelling for help.

As a result of that event, along with other similar incidents, Boruchowitz noted that all Nye County Sheriff’s deputies are now undergoing specific training on how to approach individuals exhibiting signs of the condition.

“We are currently doing recertification training which includes specific training on handling those individuals,” he said. “This training is being conducted at a perfect time because Nye County deputies are encountering more and more people who are exhibiting signs of Agitated Chaotic Events.”

Boruchowitz noted that the condition was categorized under a different moniker at one time.

“It used to be called Excited Delirium but that was a medical diagnosis and deputies obviously aren’t qualified to make a medical diagnosis,” he said. “We are training to identify the signs and symptoms of an Agitated Chaotic Event.”

Boruchowitz, who in the past received training on Excited Delirium, is conducting the training, which is now underway.

“People who are under the influence of a narcotic or stimulant are customarily much more likely to have an Agitated Chaotic Event because of what narcotics do to your mind.”

Boruchowitz also said deputies on the streets are witnessing a sharp increase of the condition in individuals they encounter.

“We are seeing more of these as of late,” he said. “We have seen an increase and we actually have instituted it for our recertification this year, specifically to Agitated Chaotic Events. Those are taking place now and we are in round two of four, to have all of our deputies county-wide trained in recognizing, observing and responding to these types of events.”

Roughly an hour and a half after the incident at the hospital, deputies were summoned to Basin Avenue and Highway 160 for another report of an individual behaving in an odd and erratic manner.

That individual, identified as Jeffery Jones, was arrested and eventually taken to the Nye County Detention Center after fighting with deputies inside Walmart.

Jones had to be forcefully restrained after he attempted to kick out the windows on a sheriff’s vehicle.

Prior to his incarceration, he was assessed by doctors at Desert View Hospital.

Boruchowitz said he suspects the man may have been under the influence of drugs.

“We are not certain what kind of drugs he was on but we believe he was under the influence of some kind of substance,” he said. “We are in the process of executing a search warrant for a blood draw to identify what those drugs may have been.”

According to the National Institute of Health, individuals who use narcotics are at greater risk of an Agitated Chaotic Event than segments of the population who are not using narcotics.