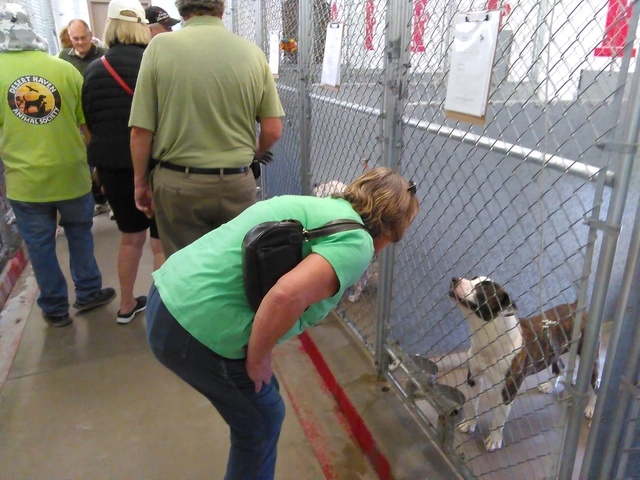 It was a grand opening for the community’s upgraded animal shelter.

Desert Haven Animal Society opened its doors to the public on Saturday, much to the delight of scores of residents and animal lovers.

The recently-formed nonprofit this year received an approval from Nye County commissioners for a $1-per-year lease agreement for Nye County Animal Shelter, located at 1511 Siri Lane in Pahrump.

Veterinarian Dr. Suzanne Zervantian will oversee operations at the site.

Zervantian was busy answering questions from prospective adoptees most of the day, while noting adoptions began taking place on Monday.

“Right now we have about 50 animals, both dogs and cats combined, and we do have a lot of kittens,” she said. “We are getting close to capacity right now, but we do have some pending adoptions.”

Though Zervantian said the facility is a no-kill shelter, she noted there are just a few exceptions to that rule.

“We are a no-kill facility and that means no more than 10 percent of the animals that we receive are euthanized,” she said. “If we have a terminally ill animal that is suffering, or if we have an animal with an extreme behavioral problem, such as biting, then we do have to unfortunately euthanize them.”

Zervantian appeared to be very optimistic about Saturday’s attendance for the grand opening.

She said many visitors expressed interest in adopting an animal.

There were no adoptions on Saturday due to all of the commotion surrounding the event.

“People are filling out their applications and hopefully they will be able to get their pets this week,” she said. “We have adoptions applications and the prospective owner will have to fill it out and go through the approval process. We want to find out if they have other pets and whether they are current on their pet vaccinations. If they are renting, they would want to have their landlord approve the adoption of a pet because we don’t want to see the animals come back. We want to find a home that is permanent.”

Zervantian also said she’s pleased to have support from volunteers who assist her staff with the daily operation of the facility over the weekend.

“We had a very good turnout and our volunteers are here to work alongside with our staff members,” she said. “We are hoping now that we are open, the adoptions will move much faster.”

Additionally, Zervantian said each animal at the shelter is pictured on their website for the sake of convenience.

“People can actually view the animals on our website before they come to the facility here,” she said. “All of our animals are listed on the website as well as the lost and found animals. If an owner gets home from work and they find that their pet is missing, and if it came in that day, chances are it’s going to be posted on the website and where it was found. We want to keep it up-to-date so that people will know.”

A new addition at the facility is what’s affectionately known as the “Cathouse.”

“We have a cat room where there are free roaming cats that get along well with the other cats,” she said. “For the dog area, visitors will be escorted by a volunteer or staff member. It creates less stress on the animal and there are also concerns with infection control and safety issues. It’s good for the visitors because we don’t want them bringing home something that could be contagious to their animals or home or vice versa.”

Pahrump resident Deborah Reilly and husband made sure to attend the grand opening, just to see how the shelter has changed since last year.

“We just wanted to come down to see the new facility and their operations,” she said. “We can’t adopt because we already have a dog that has a behavioral problem with other dogs. I already put my application in to volunteer here and hopefully they will give me a call so I can help out with some of the free time that I have.”

Zervantian noted that all of the animals are spayed and neutered prior to being adopted out so families will not have to come back for the procedure.

“They are also microchipped, registered and they have all of their vaccinations, including rabies,” she said. “We are open Monday, Tuesday, Thursday and Friday from 12 to 6 p.m. We are closed Wednesdays and Sundays for cleaning and medical procedures.”