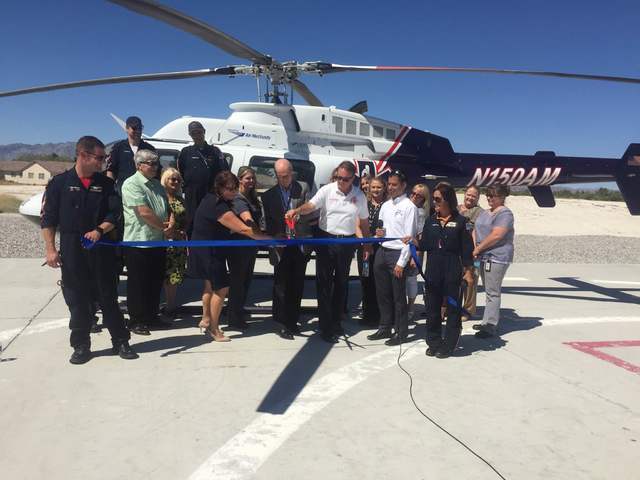 Mercy Air celebrated its 15th year serving the Pahrump Valley by welcoming in a second aircraft, which is stationed out of Desert View Hospital.

The second airship marked the occasion with a ceremonial landing and ribbon-cutting ceremony Wednesday morning in front of press and a handful of hospital, emergency and Mercy Air staff.

The helicopter will be onsite at DVH, or Airbase 24, from 10 a.m. until 10 p.m. seven days a week, which will increase the quality of care at the facility.

Were highly encouraged by the presence of a helicopter here at Desert View Hospital for 12 hours a day, said Kelly Adams, chief executive officer at DVH. It certainly decreases the response time when we have a patient that needs to be flown out. Anything to take care of a patient quicker, faster and more efficiently, we definitely support.

Its a real commitment by Air Methods and Mercy Air to put this piece of equipment here with their time and staff, so we applaud them and what theyre doing.

The plan to get the airbase at the hospital has been in the works for the better part of the year.

Weve been working on this for probably five or six months, with all the discussions and contract language and different types of things, Adams said. Its been a real effort on their part and our part to make sure theres enough staff and team to go with it.

Although the work to actually get the airbase at the hospital took several months, those that work in the emergency room have been waiting for this day for years and they are thrilled to see to see it finally come to fruition.

Weve been wishing for it for a long time and we actually began talks about it months ago, said Sherry Cipollini, emergency room manager at DVH. To finally see it here, its great.

When dealing with a critical-care patient, time is everything, and having an airbase onsite at the hospital will save time transporting a patient in need of services that the hospital cant provide.

It takes about 20 minutes from Calvada to here, Cipollini said. With them based out of here, it will only take about five minutes to load and leave.

In addition to saving time, having the new airbase at DVH will also cut down on the stress that is put on the aircraft itself.

The biggest stress on one of these units is every time they stop and start it, Adams said. So if you think, if they are based out there on Calvada, they have to start it, come over here, land it, stop it, load the patient, then start it again, then take them to Las Vegas.

So it really reduces the operating costs and wear and tear on that piece of equipment and it reduces the response time for our patients and for our ER physicians to get the patients out quicker.