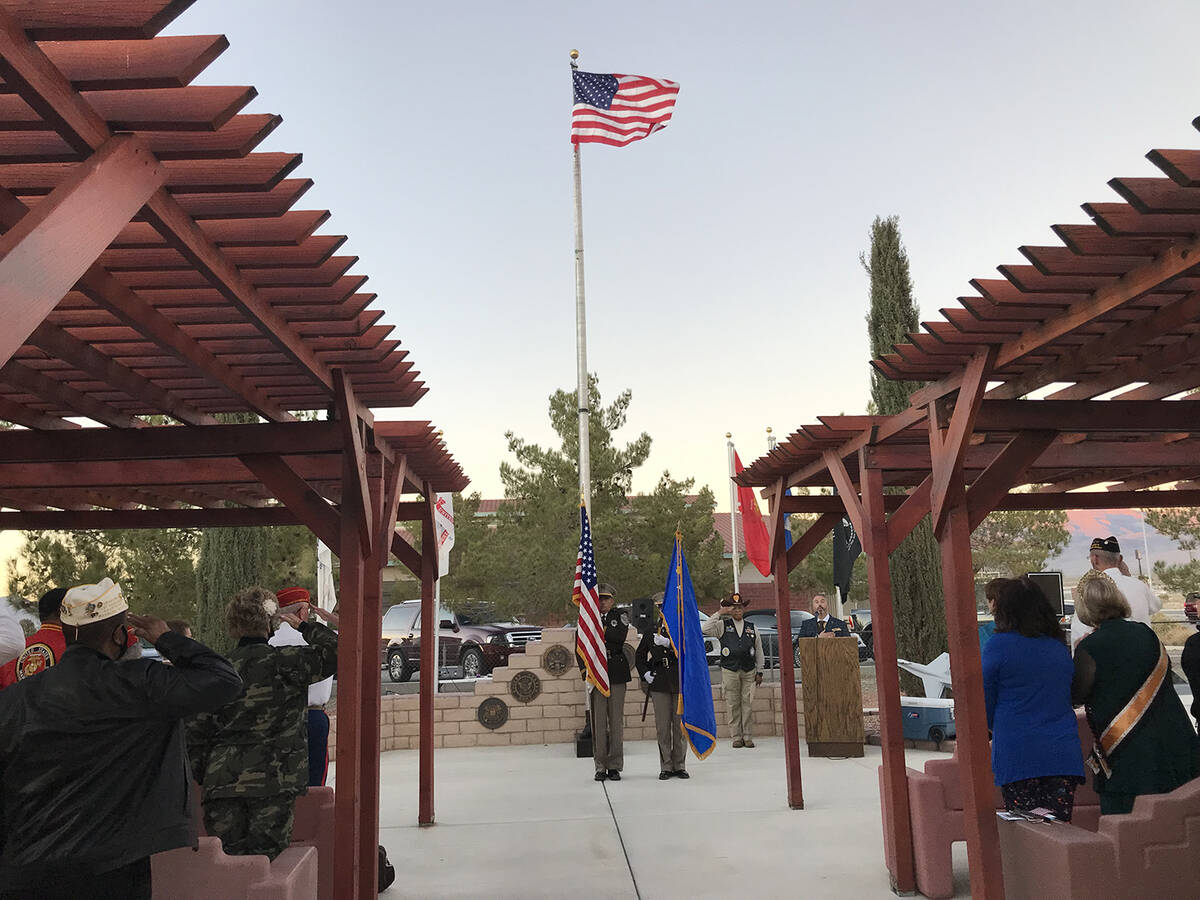 Robin Hebrock/Pahrump Valley Times The DAV Chapter #15 hosted its Veterans Day Ceremony on Thursday, Nov. 11 and the audience can be seen standing for the presentation of the colors, conducted by the Nye County Sheriff's Honor Guard. 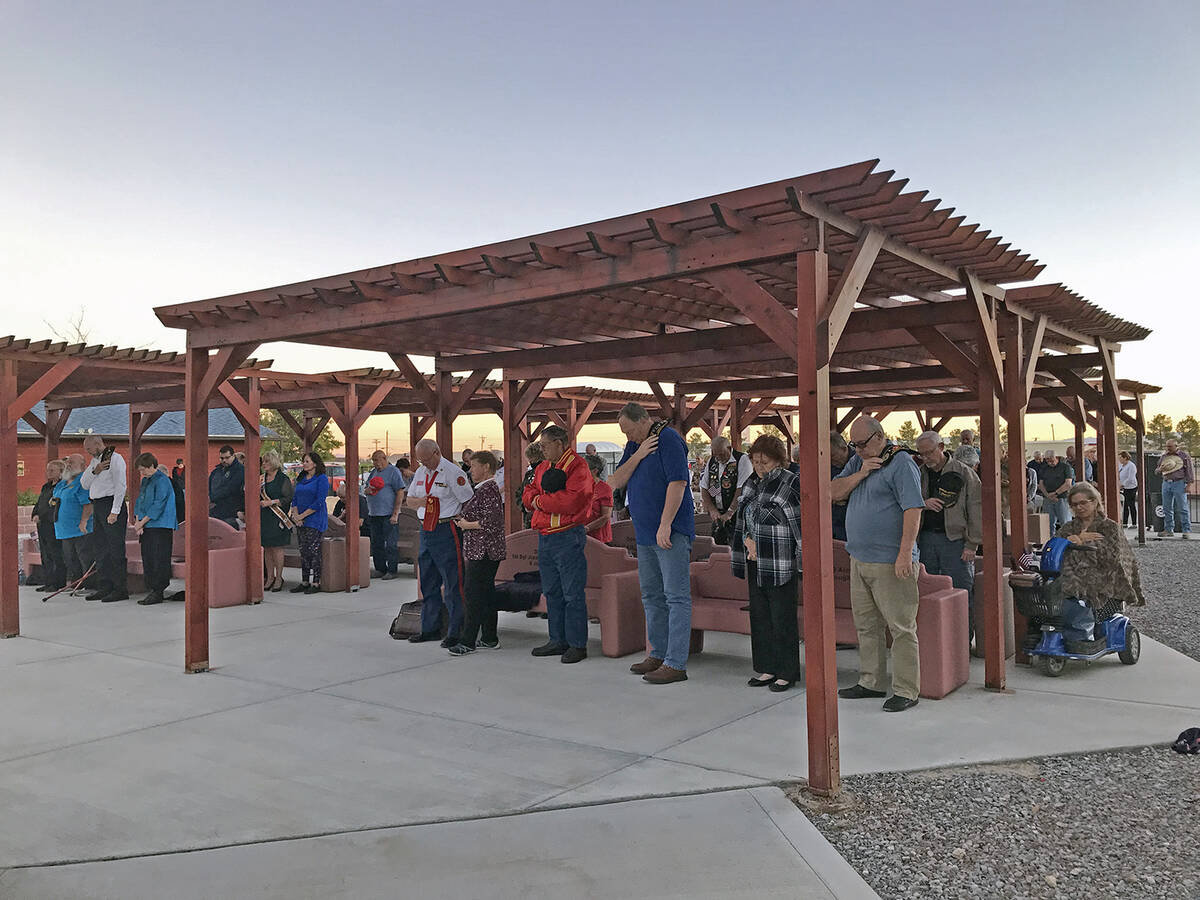 Robin Hebrock/Pahrump Valley Times There were upwards of 100 people in attendance at the DAV Veterans Day Ceremony, which took place at the Pahrump Veterans Memorial inside the Chief Tecopa Cemetery. 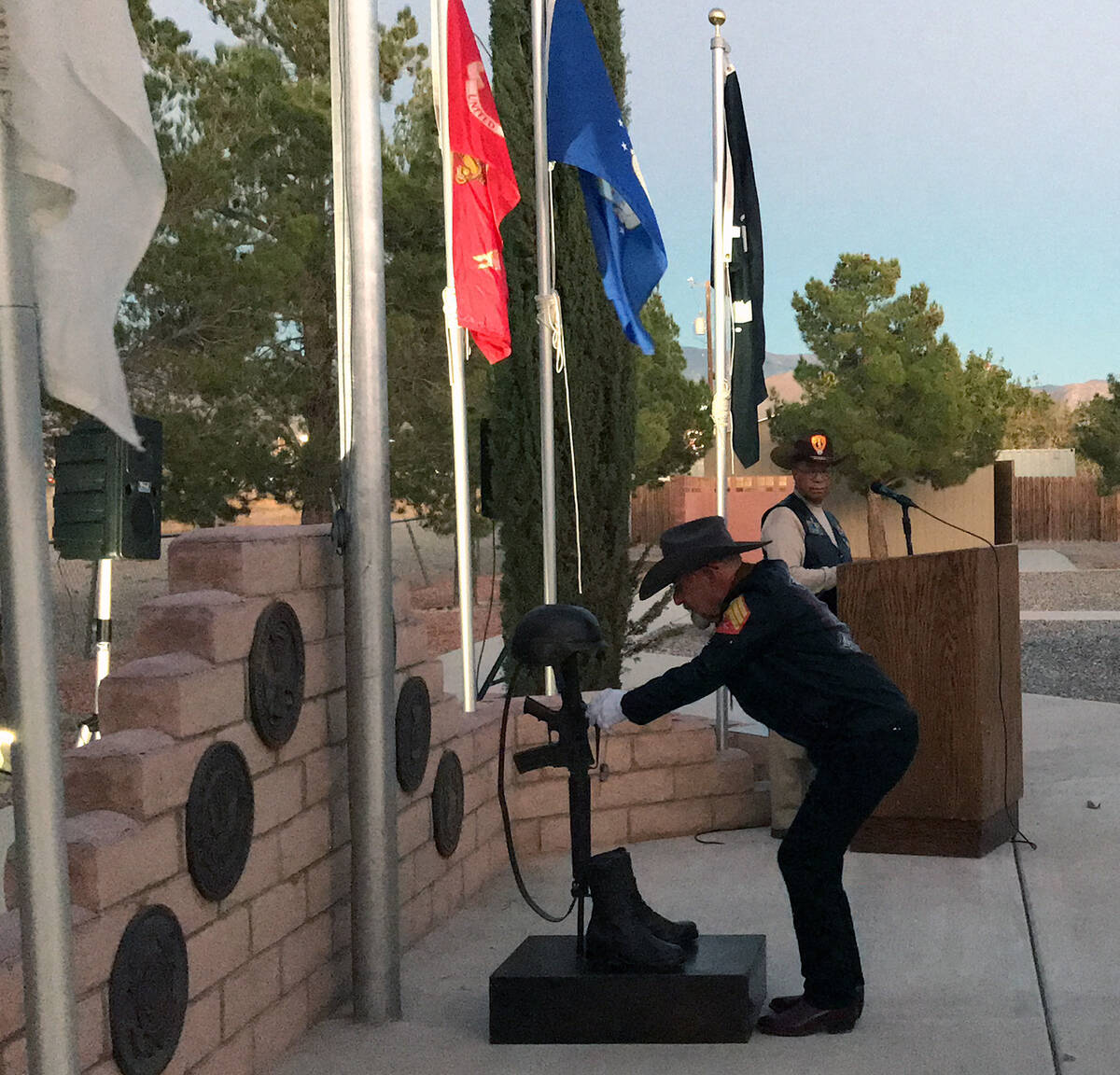 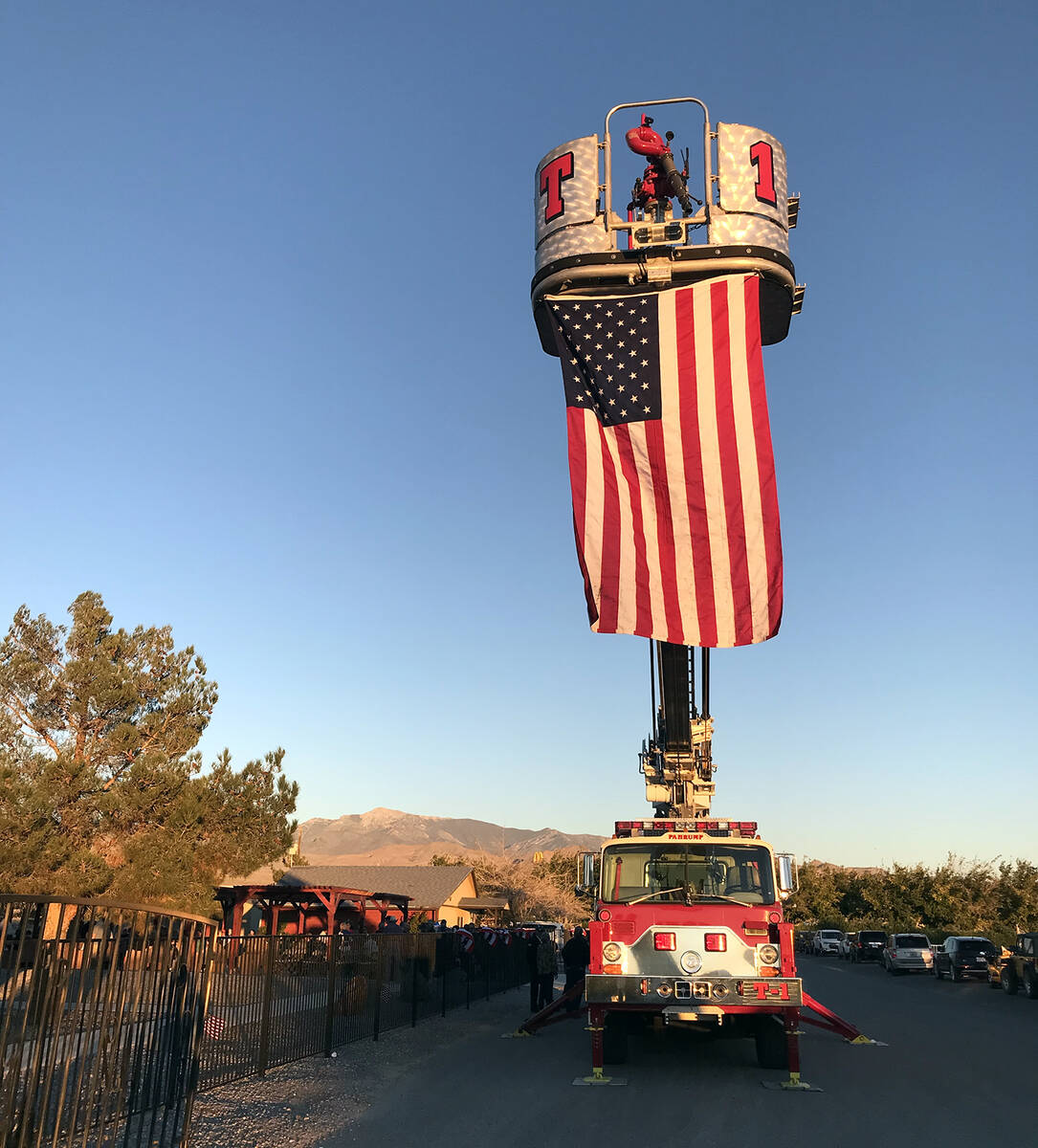 Robin Hebrock/Pahrump Valley Times Pahrump Valley Fire and Rescue was out at the DAV Veterans Day Ceremony, with an American flag proudly hung from the boom of one of its ladder trucks. 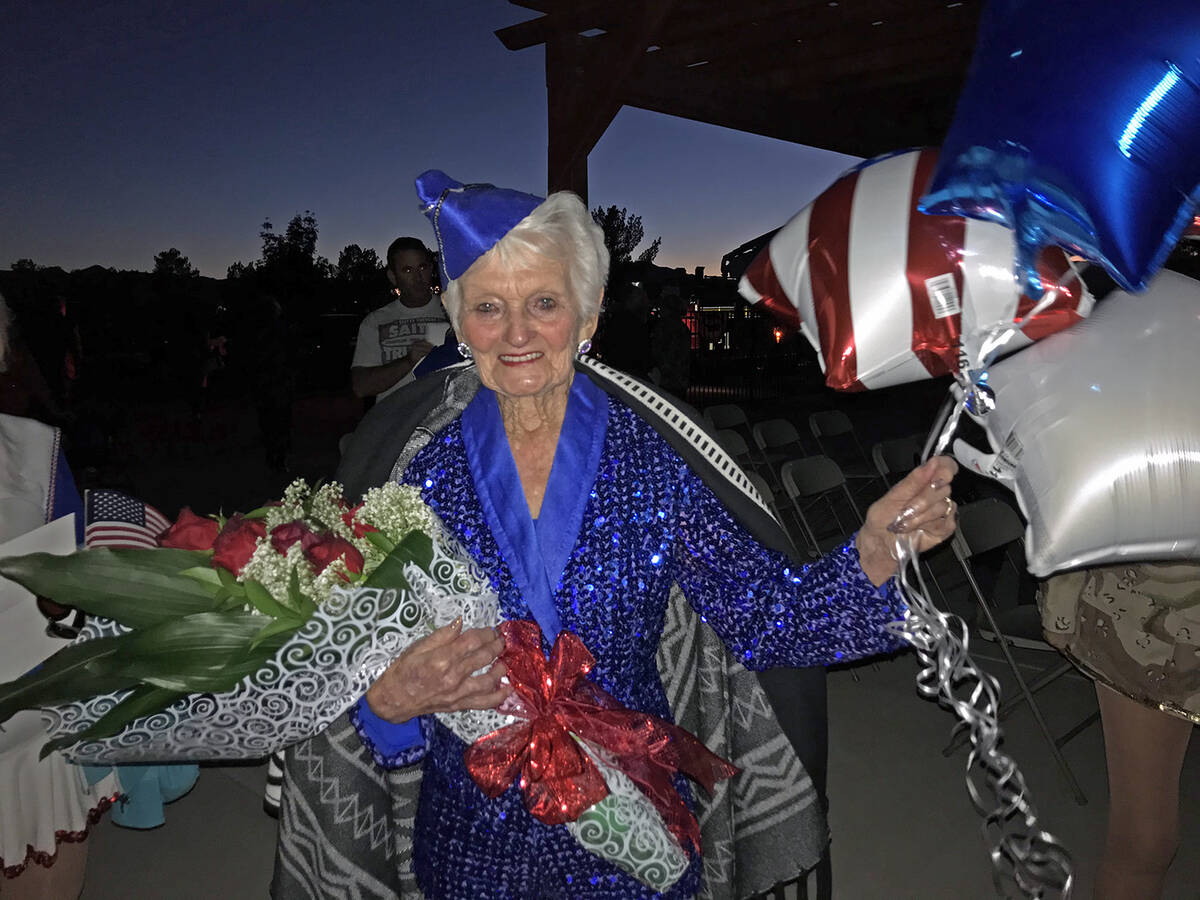 Robin Hebrock/Pahrump Valley Times Nevada Silver Tappers Founder B.J. Hetrick-Irwin was flabbergasted by the special presentation made in honor of the continued support that she and her Silver Tappers have shown over the years for the valley's veteran population. 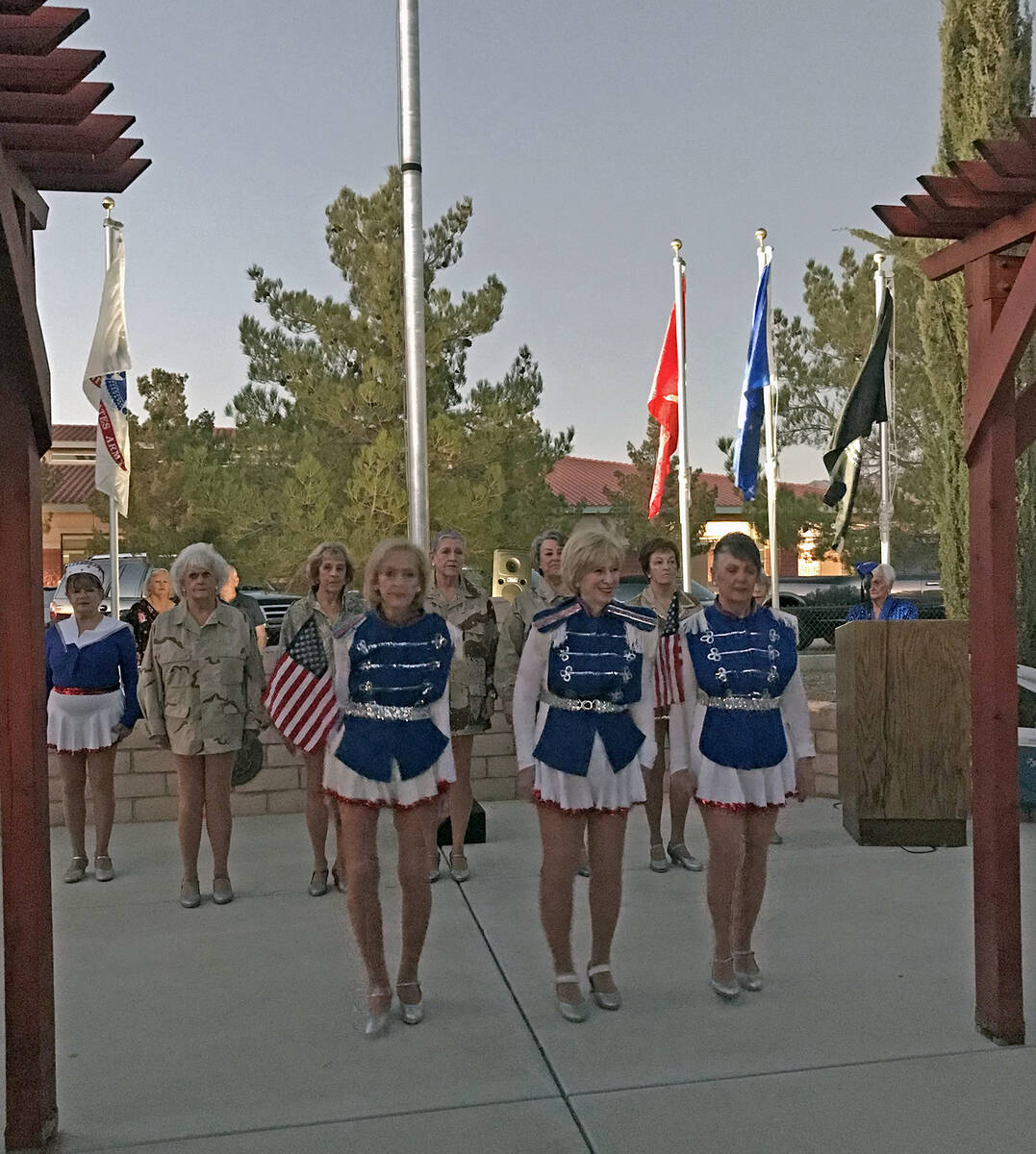 Veterans Day in the Pahrump Valley was marked by two ceremonies, the second of which was hosted by the Disabled American Veterans Chapter 15 at the Pahrump Veterans Memorial inside the Chief Tecopa Cemetery.

Around 100 people made their way to the venue at 4:30 p.m. to observe or take part in the event, including veterans, civilians, local elected officials and area first responders. As the sun began to make its descent over the western horizon, DAV Chapter 15 Commander Terry Janke greeted the audience and thanked everyone for turning out to recognize the importance of the day.

Before proceeding into the formal program, Janke took a moment to ask that all the veterans in attendance take a stand so those in the crowd could acknowledge them with a round of applause.

“These are the brave men and women who allow you the freedom to be here today,” Janke said.

DAV Chaplain Doug Garlin gave the invocation, and the presentation of the colors by the Nye County Sheriff’s Honor Guard followed, with everyone taking to their feet, removing their hats and placing hands over hearts or saluting the flag while they recited the Pledge of Allegiance.

Miller started off by noting that she has attended many Veterans Day ceremonies that day but that the one in Pahrump was unique because of the type of attendees in the audience.

“When Terry asked all of the veterans to stand up, I expected almost everybody to stand up, because the ceremonies I have gone to today, it was almost all veterans, but the community participation wasn’t that great,” Miller said. “There were more community members here, nonveterans, celebrating our veterans than there were veterans. That really says something about Pahrump. What a place it must be to live when your neighbors come out to celebrate your day and to say how special you are. Pretty spectacular.”

Miller then transitioned to her prepared remarks, noting that Veterans Day is not just about singling out heroes.

Miller remarked that there are all kinds of service. For many, the word “veteran” calls to mind someone who served in combat. But there are many who never saw a battlefield and their contributions are no less valuable, as their efforts supported those in harm’s way, ensuring they had the supplies and equipment they needed to do their duty.

“Regardless of how they served, our veterans were prepared to defend our nation,” Miller said. “So today and every day, when you thank a veteran for their service, thank them for what they were willing to do. Not for the number of beaches they landed on, or the number of enemies they killed, but for standing up and saying, ‘I will serve this nation and its people.’”

In conclusion, Miller added a reminder as to why it is imperative that the people provide steadfast support for members of the military, commenting, “Our freedom will only be preserved if Americans continue to answer the call to service and prove ourselves worthy to be free. And to earn that freedom and understand that freedom, we need only look to the example of those veterans we have here today. Their legacy is your freedom.”

Marine veteran Jerry Dumont then had the solemn duty of conducting the dog tag ceremony, in which ID tags representing each branch of the military are placed upon a statue depicting the boots, helmet and rifle of an American soldier, after which a medley of the songs that embody each branch of the service was played.

The Silver Tappers then came to the front of the venue to perform a dance routine with a decisively patriotic overtone. Once finished, Waters had a special surprise for the organization’s founder, Hetrick-Irwin. He asked her to come forward once more and proudly explained that Hetrick-Irwin and the Silver Tappers as a whole have played such a large part in supporting the area’s veterans over the years that those in the veteran community wanted to do something for them in return.

Waters called forward the representatives from each of the valley’s various veterans’ organizations, all of whom presented Hetrick-Irwin with a certificate of appreciation and offered a few words of thanks to the shocked and humbled 96-year-old.

“We are so thankful for you and what you do for us,” Janke told Hetrick-Irwin, who teared up and replied, “This is nothing, sweetheart, compared to what the veterans have done for us.”

Zaman was next to make a presentation, remarking, “I have known BJ for quite a while, been to all of her events and she is well worth it.”

Griggs followed Zaman, and his presentation came not just with a certificate of appreciation, but with something a little more. “BJ, it is my great pleasure to give you honorary membership in the United States Marine Corps,” Griggs announced to applause.

Kennard was the final one to make a presentation, stepping forward to state, “This is one of the greatest honors that I have ever done. It is truly. You do so much for us and the entire community.”

There was one more surprise to come when a bouquet of flowers was presented to an emotional Hetrick-Irwin.

“Without you guys, the veterans, we would be nothing, absolutely nothing,” she said. “And it’s always our pleasure to do all we can for this wonderful, wonderful community. It is the best place to live, right here in Pahrump.”