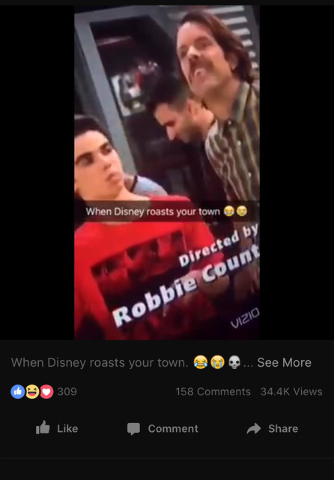 No, these aren’t things your average bully said to a would-be victim, these are unprovoked comments entertainment giant Disney aimed at Pahrump.

In season 1, episode 20 of one of the most popular Disney XD shows, “Gamer’s Guide to Pretty Much Everything,” which aired on March 16, characters from the show hurled several negative words at the valley. The show replayed last week.

The insults begin with the character Mr. Spanks, (played by actor Joe Hursley) and the show’s main character Connor, (played by child actor Cameron Boyce) talking about taking Mr. Spanks’ goat to a fair in Pahrump.

“Because now there’s an opening for my petting zoo at the County Fair,” Mr. Spanks said. “The big time, the big show, the bright lights of Pahrump. Home of the world’s largest stinkhole.”

To make the negative comments even worse, the show then takes aim at the children of the valley.

“Buttercup’s (a goat) a little nervous. This is her first big trip,” Mr. Spanks said.

“Well, of course she’s nervous,” Connor said. “You can’t take a delicate little creature like Buttercup to a city like Pahrump. All those filthy kids, petting and poking her after playing in that stinkhole all day. Yuck.”

“Of course it is,” Connor explained. “She’d be sure to get the lump.”

“I don’t want her to get the lump in a dump like Pahrump,” Mr. Spanks replies.

The episode ends with Mr. Spanks returning from Pahrump with a giant growth on his neck, which is described as the “Pahrump Lump.”

Rosemary Clarke Middle School student, Danyelle Ormiston, posted a clip of the episode on Facebook and it garnered over 35,000 views and almost 1,100 shares, an astronomical amount coming from someone who has 217 followers on the social media site.

Ormiston explained she had no idea the clip would draw so much interaction.

“We were surprised when we saw the attention the clip got,” Ormiston said.

Comments left by Facebook users who saw the clip varied, ranging from “That’s funny,” to another poster asking “what did pahrump do to make disney hate us so much?”

Ormiston’s friends and classmates were surprised that the Disney show would even mention their hometown and really didn’t take any of the comments to heart.

“They just thought it was funny Pahrump was even mentioned in the show,” she said. “We didn’t think the comments were meant to insult anyone, we just thought they were a comedic line.”

When reached for comment, Disney XD representatives weren’t made available for comment, but issued a short statement.

“We never intentionally seek to upset people and regret that some residents of Pahrump took offense to the jokes and the storyline, which was embellished for comedic effect,” said an unnamed Disney XD spokesperson.

Sure, some of the comments could be viewed as just a joke, but when you drag the kids of the town into the punchline that’s where the joke stops for Town of Pahrump Tourism Director Arlette Ledbetter.

“My disappointment is that Disney is a family values producer and their comments of derogatory or marginalizing the children are unnecessary,” Ledbetter said. “Communities get labels, there are labels on Las Vegas for being Sin City, the Northwest being tree huggers, California having beach bums, and you know Pahrump has done some really positive things and I just don’t think it’s right for anyone, especially Disney, to marginalize the children.”

Nye County Manager Pam Webster agrees with Ledbetter, as she sees no reason why the show would insult the youth of Pahrump, especially ones who are supporting their shows and products.

“Those comments on the kids are just terrible. Talk about bullying,” Webster said. “I just think it’s awful and I think something should be done about it.”

Webster, who said she’s contemplating having the town take legal action, explained she had a few ideas of how Disney could apologize to the town of Pahrump for the verbal assault.

“I think it’s terrible and I think it needs to be corrected publicly, not in a little email from them saying, ‘Oh, we’re sorry, it was comedic effect.’ Please, we don’t take it in a comedic manner,” Webster said.

Besides the public apology, Webster has another way that Disney could turn what she perceives as wrong into a right.

“I think they should come out to Pahrump and film an episode here,” she said. “They can show how beautiful the area is.”