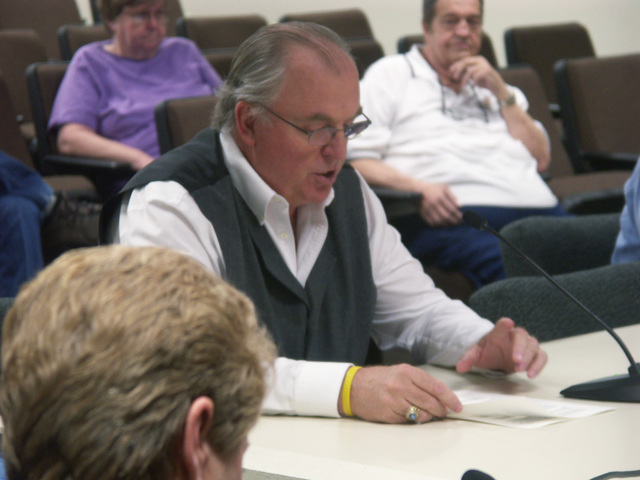 For the third time during a town board meeting, a Pahrump Town Board member left the dais to speak as a private citizen on the issue of incorporation.

In late February, Board Chair Harley Kulkin made an announcement seated before the board during public comment.

The chairman told the room that he thought it would be a serious mistake for the future of the young people in the community if Pahrump does not incorporate soon.

Kulkin’s message about doubling down on his effort to incorporate the town was met with strong resistance from fellow board member Amy Riches during a subsequent meeting a month later.

On Tuesday, it was Bill Dolan’s turn.

With Kulkin pushing for incorporation and Riches pushing back, Dolan, who is presently campaigning for the county’s District 5 commission seat, took the middle ground telling the room that he is neither for, nor against incorporation.

Dolan said he has heard a lot of rumors and lies about how he is supporting the idea.

“I am here to put this to rest tonight,” he said, reading a prepared statement. “Let me say this once and for all here tonight for those who are present, those who are watching at home on either Granicus or KPVM TV. I am not for and I am not against incorporating the Town of Pahrump. Period. These rumors and lies that are being spread are nothing more than a ploy to distract you, the resident, from the real issues that need solving in our community and in our county,” he said.

The vice chair also made reference to his intentions once a decision is handed down by the Nevada Supreme Court regarding the future of the Pahrump Town Board.

“When I was elected to the town board, I was dealt a set of cards to work with. If those cards change because of an election, or a court ruling, then I will work with those new cards as well to represent you, the residents of Pahrump and Nye County. No one sitting up there on the dais has any authority or power to incorporate anything. It takes a vote of you, the residents of this county and this community to do that, and only you,” he said.

Additionally, Dolan invited other candidates to discuss any issues pertaining to both the town and county.

“If any of my fellow candidates in the Nye County Commission District 5 race want to get together and discuss the real issues that are facing our community and county, I am more than happy to oblige them. I’ll do it in an open, honest setting so that the rumors and the lies stop, especially by the campaign staff members,” he said.

Dolan closed his comments with a quotation from a 1958 John F. Kennedy speech at Loyola College in Baltimore, Md.

“Let us not seek the Republican answer or the Democratic answer but the right answer. Let us not seek to fix the blame for the past, but let us accept our own responsibility for the future,” he said.

Board member Dr. Tom Waters also provided an opinion on the incorporation issue.

During the final town board meeting of March, Waters addressed colleague Amy Riches’ remarks by suggesting that every resident should have the right to vote on incorporation.

He shared his thoughts from the dais as well.

“Over 48 percent of Pahrump voters arrived after the last vote. The last vote was in 2000,” he said.

Additionally, Waters said Riches’ no vote position leaves little room for those who may have changed their minds on the issue.

Moreover, the population in town has increased since the last time residents voted on incorporation.

The 2010 census showed the population had risen by more than 11,800 residents.