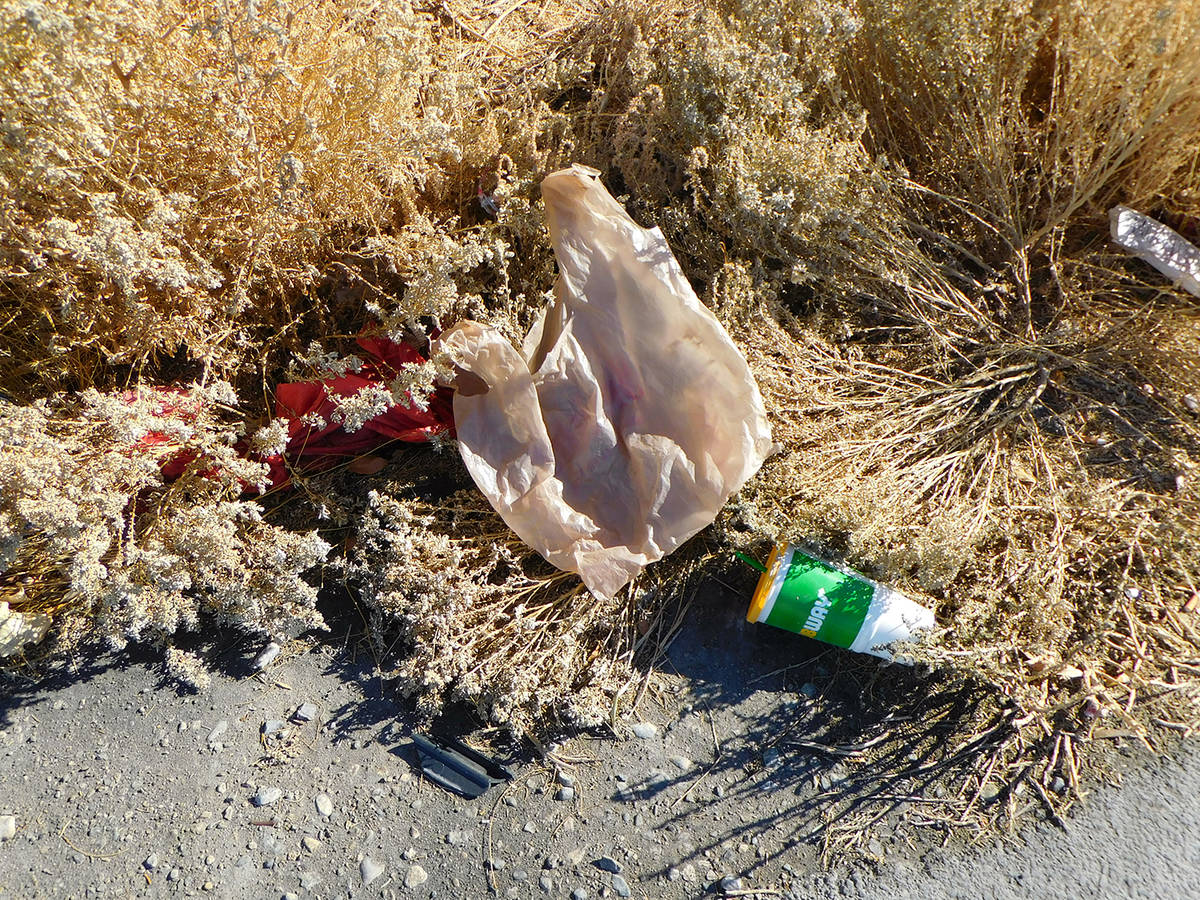 Robin Hebrock/Pahrump Valley Times Trash along the roadways in Nye County is a continual problem and county officials are asking people to help keep the area clean by disposing of their garbage properly. 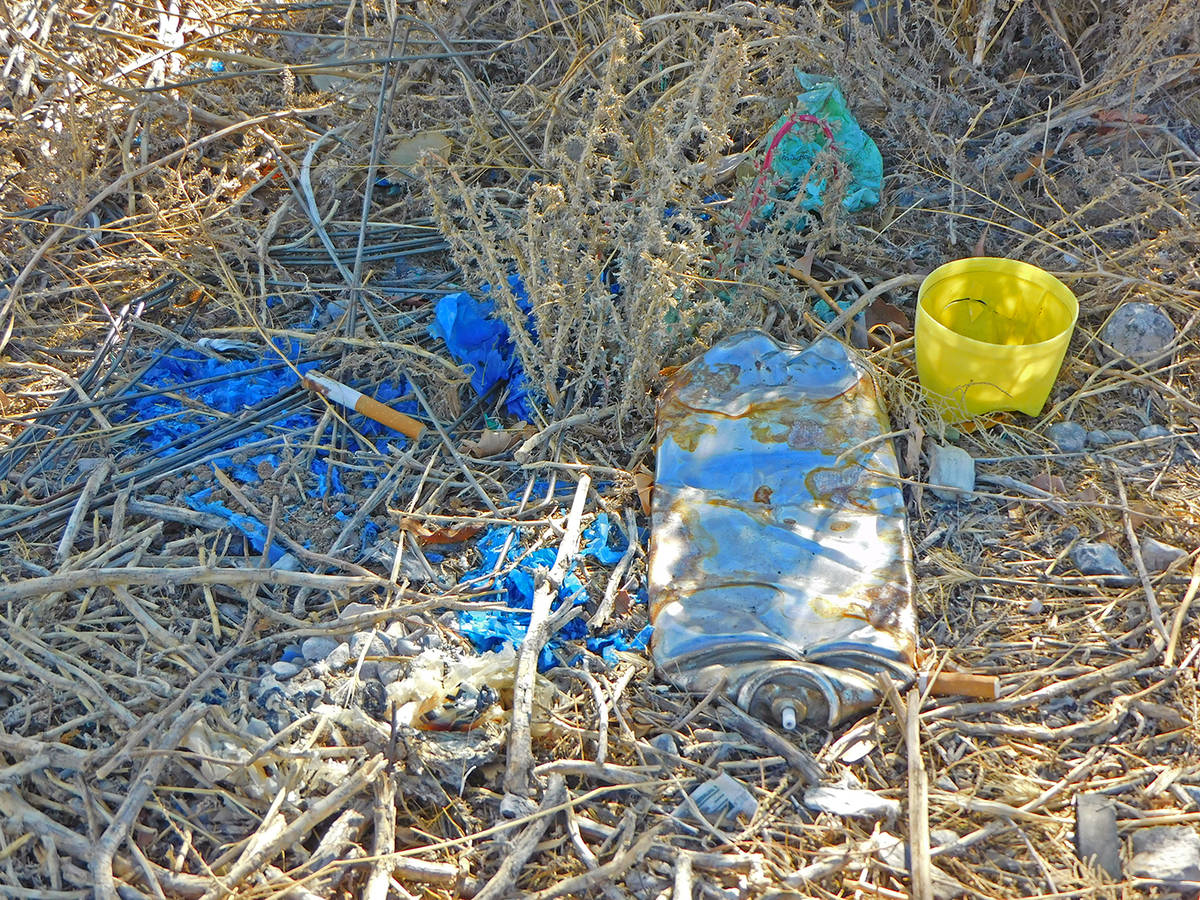 Robin Hebrock/Pahrump Valley Times Despite the availability of a free dump, local codes that require loads to be tarped and the fact that littering is illegal, all sorts of garbage lines the streets in Pahrump, leading to frustration for many residents as well as county officials.

Anyone who has traveled in the town of Pahrump or throughout Nye County has likely witnessed the unfortunate fact for themselves: the county’s roadways are littered with trash. From fast food bags and cups to cigarette butts purposely discarded and even entire sacks of household waste that have accidentally flown out of the back of a vehicle, the signs of local littering are easy to spot.

And it’s not just the roadways, either. The vacant lands spread throughout Pahrump and the rest of the county are a harbor for garbage and refuse too, with irresponsible, inconsiderate people dumping loads in the desert without any apparent concern as to how this effects not only the environment but the overall image of the town and county as well.

It’s been a topic of discussion during Nye County Commission meetings several times over the past few months and the subject was thrust to the forefront once again during the commission’s first meeting of the year, held Monday, Jan. 4. This prompted a call from county officials for residents to help keep the area’s roadways and deserts clean by disposing of their trash in proper receptacles rather than out of their car windows, utilizing the local, free landfills and ensuring they follow the county code by placing a tarp over any loads being transported to the dump.

Amargosa resident Pat Minshall got the ball rolling on the topic on Jan. 4 during the public comment portion of the Nye County Commission meeting.

As someone who regularly travels along Bell Vista Road between Amargosa and Pahrump, Minshall said she had observed all sorts of garbage along the street, a disappointing sight and one that does nothing to offer a positive impression for the town.

“I hear the chief treasurer, (Nye County Treasurer John Prudhont, who has previously lamented the trash problem) I hear Pat Minshall, I hear other citizens of Pahrump and Nye County with the frustration about all the trash that is being deposited along our roadways,” Nye County Public Works Director Tim Dahl stated following Minshall’s comments.

“Whether you’re heading to the landfill or just going over to the neighbors, we really need to try to make sure that all the trash we have in our vehicles doesn’t just fly out on the way to our destinations,” Dahl continued. “And I am hoping that this board and everybody else will help spread the word that there is no cost for citizens of Nye County to go to our landfills, there is no gate fee. If you have trash, municipal household waste, you can bring it into the landfills and there is no fee at the landfill gate. So please, let’s be conscientious of our trash and let’s spread the word that we have a landfill in each one of our communities that serves the purpose of trying to keep our deserts and our roadways clean.”

Nye County Commissioner Frank Carbone, joining the board for his first meeting of his new term as commissioner, chimed in on the topic, remarking that stepping up enforcement might help the trash problem. “Part of the issue with the trash is, a lot of these vehicles don’t have covers on their loads, that’s one of the big issues we have. Maybe we need to start taking a look at that and maybe a couple citations here and there might start curbing that issue,” Carbone stated.

Also taking his seat as a newly elected representative for the citizens of Nye County was commissioner Bruce Jabbour and he, too, offered comments on the trash situation. “Perhaps we can remind people, there is a new thing on the market, it’s called tarps,” Jabbour said, eliciting wry chuckles from his fellow board members. “And I believe it has been required to tarp their loads and trucks and trailers for many, many years now.”

Nye County Commissioner Leo Blundo added that while covering loads is obviously key, pushing for public awareness of the county code that requires covered loads does nothing to address the litter that is already out there. He suggested that the county arrange to have a meeting with the local group Clean Up Pahrump to discuss potentially prioritizing certain areas for trash removal.

Clean Up Pahrump is a local nonprofit organization made up of concerned residents who, since February 2018, have been striving to spend at least one hour each week picking up trash in Pahrump and the surrounding areas and have been encouraging others to take the initiative and do so as well. Anyone interested in learning more about Clean Up Pahrump or their planned activities can visit www.cleanuppahrump.org or contact the group at info@cleanuppahrump.org or 775-419-6123.

The Nye County Landfill in Pahrump is located at 1631 E. Mesquite Avenue and is open from 8 a.m. to 4 p.m. seven days per week, with the exception of New Year’s Day, Thanksgiving and Christmas.

The Nye County Landfill in Tonopah is located on Highway 6 off of Highway 95, approximately 6 miles from Tonopah and is also open from 8 a.m. to 4 p.m. seven days per week.

There are roll-off garbage collection containers in both Amargosa and Beatty, trash from which is transported to the landfill in Pahrump.

The Amargosa Transfer Station is located on Highway 373, seven miles north of Longstreet Inn Hotel and Casino and is accessible 24 hours per day, seven days per week.

The Beatty Transfer Station is located on Highway 374 heading toward Rhyolite and is also accessible 24 hours per day, seven days per week.

For more information on each of the transfer station locations or the Nye County Landfill visit www.candswaste.com

Residents are reminded that the transfer stations and Nye County Landfill in both Tonopah and Pahrump are all free to use but only household waste is permitted. No hazardous materials are to be disposed of in these locations. Hazardous waste includes electronics such as computers, televisions and cell phones, as well as items such as motor oil, oil filters, pesticides, herbicides and paint thinners. For more information on how to properly dispose of hazardous waste visit www.ndep.nv.gov, click on the “Recycle” link followed by the “Special Waste” link.