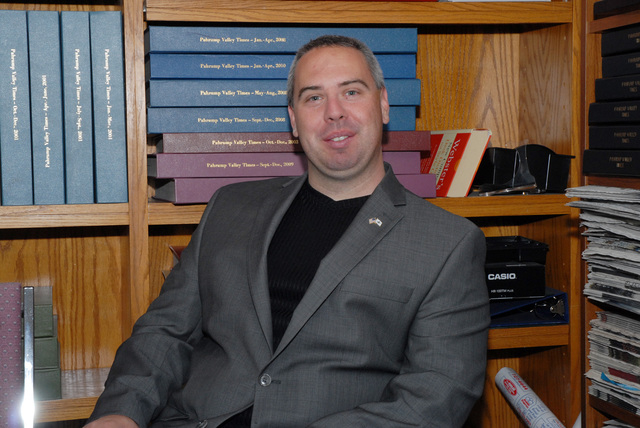 After having served nine years in law enforcement, one sheriff’s race candidate says he’s looking to use his skills and experience to improve the functionality of the Nye County Sheriff’s Office from the inside out.

Gregory Curtin, a K-9 deputy with the Nye County Sheriff’s Office, said if elected his main goals would be to boost morale among his fellow deputies, create stronger, more open lines of communication between the department and the communities it serves and to streamline the NCSO budget, implementing policies to get deputies back out on the street more frequently where they can help people by limiting the amount of time they must be in the office filing paperwork.

Curtin is currently a member of the NCSO Special Weapons and Tactics Team and patrol division. Prior to joining the sheriff’s department almost a decade ago he said he worked in the business world as a general manager, where he gained experience in managing a work force and handling budgets, staffing issues and other items that could help him be an effective leader if elected to the office.

The sheriff’s candidate said his decision to become a deputy sheriff in Nye County almost ten years ago was rooted in his desire to help his community and something that he said had always been able to picture himself doing as a career.

Curtin recently sat down with the Pahrump Valley Times to discuss his candidacy and goals for the department if elected as the next sheriff of Nye County.

What made you decide to run for office this year?

I wanted to run for sheriff because I want to try and change the department. There are a lot of things I feel need to be changed, so I figured this was the year to try and do that.

Q: What are some of the things you would like to change in the NCSO?

A: I want to try and boost morale. Morale seems a little low lately and I want to work on better community relations. I feel that there are a lot of different scams going on out here that the public doesn’t really get to know about. By having better community relations, like having community meetings where as the sheriff you could come down and talk about different crimes that are occurring around town, you can help people out by letting them know what’s happening in their community.

I’m from back east too, but I’m from Massachusetts, and back there we had community picnics every now and then where the agency actually throws a picnic for the public and I thought doing things like that to get the community a little more involved with the department could help out.

Another thing I would like to change is the reporting system so we can get the deputies back out on the street so they don’t have to spend as much time at the station. I would go to a more easily formatted system where the deputy would have a better chance of completing his form in the field rather than having to always go back to the office.

Q: Do you think having served with several different units within the NCSO and your work prior to becoming a deputy might help you if elected to the position?

A: Yes and no. I think some of my background would help. Before I went into law enforcement I was in business management. I was a general manager so I had to work with employees on staffing, budgeting, scheduling and marketing.

I believe in essence the sheriff’s office is a like a business. We’re non-profit, everything comes in from the community, and we’re in the business of public service. It’s the same thing as a retail store or restaurant, or any another business like that, we’re offering a product so it should be modeled like a business where we have our hierarchy with the sheriff, who would be like a general manager, and then you have all of your assistants down the line — lieutenants, captains, assistant sheriffs.

I had eight years experience in that field before coming over to law enforcement and I think that would be helpful.

Q: There’s been some concern about the NCSO going over budget in the past, do you have any thoughts on how you would avoid having that happening again in the future?

A: The first thing I would like to do is check the line budget and see exactly where we’re spending our money. By doing that, you then put aside things that are not necessary at the time. Just like any other business you need to know where you need to put your money and where you don’t need to put it and to have a little bit better control over your money. It’s almost like your own personal life.

So first I would like to see exactly where all of the money is going. A lot of things that have to come from the commissioners, like salaries, those are all fixed, so if you have x amount of deputies, each deputy is driving a patrol vehicle, so that’s gas, equipment, and other essential items, but then there’s the not so essential things and we need to get a tighter reign on those things.

I know Ford stopped producing their Crown Victorias, so that’s another thing we have to look into is fleet management. Is there a cheaper vehicle that provides the same function or will we be forced into a more expensive vehicle? Then you should always try to get some kind of fleet management in place so you’re rotating new vehicles in and older vehicles out so it’s a constant rotation instead of trying to buy 10 or 15 vehicles all at one time. That could be a way to combat some of those issues.

Q: Is there anything else people should know about you or your campaign?

A: I’m just here for change and a better future. I want to be a little more community-oriented and work well with the union.

That’s another financial thing right there, if you’re always bumping heads with the union, then things are constantly going to arbitration and you’re paying money for that. So I would like to revamp some of the policies, but have the union on board so that way everyone can work together as one cohesive unit.

We’re all the same department, there isn’t any reason why we’re always butting heads. We need to be one unified front so that will help everyone out. I also want to make sure morale is up and to have better employee recognition. I’m just here for the community. I’m trying to revamp everything and help things run smoothly.