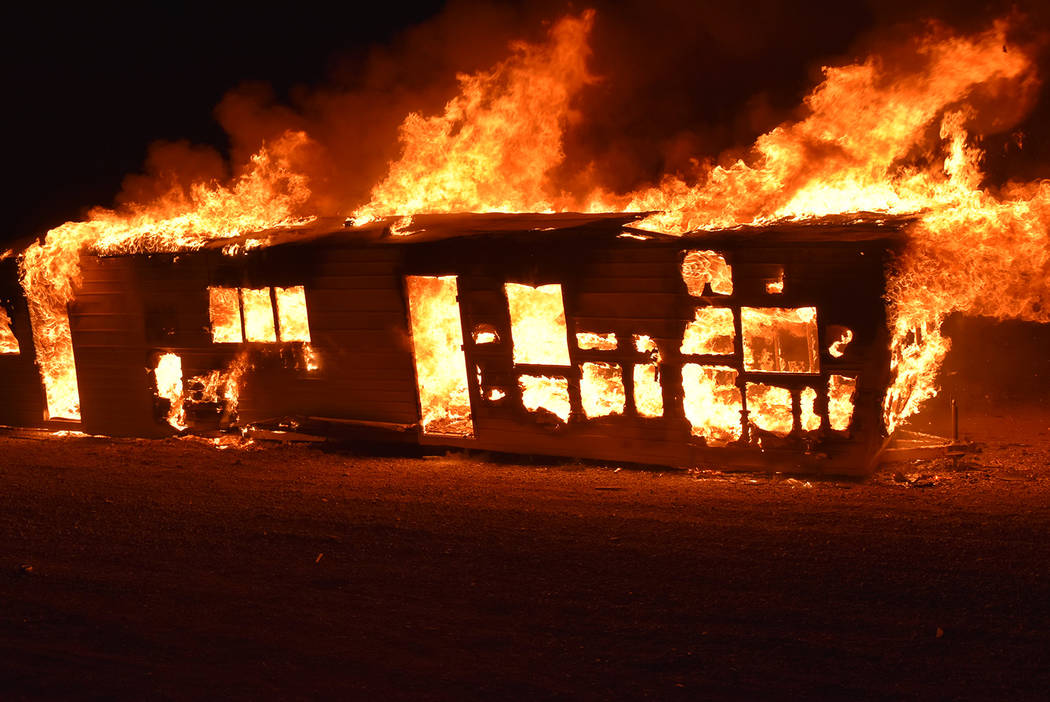 Special to the Pahrump Valley Times Fire destroyed a travel trailer in the area of Barney Street and Brick Lane just after midnight on Saturday July 6. No injuries were reported. 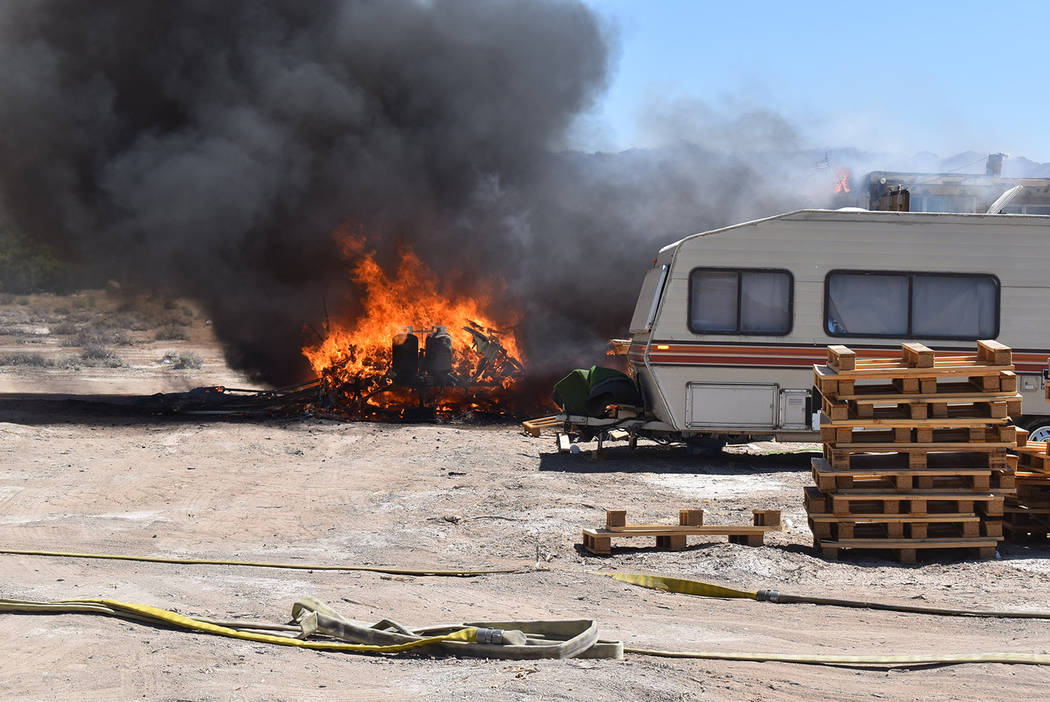 Special to the Pahrump Valley Times Fire crews were summoned to the 4000 block of West Venus Street for a reported structure at approximately 2:40 p.m., in Saturday July 6. One occupant sustained burns to the bottom of his foot, but was not transported, according to Fire Chief Scott Lewis. The cause of the fire is under investigation.

At least three people were transported to Desert View Hospital following a two-vehicle collision at the intersection of Honeysuckle and Dandelion streets.

“There was a separate medical incident occurring at the scene in which CPR was underway by the sheriff’s office,” Lewis said. “The investigation revealed that apparently an individual overdosed, and the deputies administered Narcan, (a nasal spray administered for opioid overdoses). Resuscitative efforts revived that patient, who was rapidly transported to the local hospital. Two additional patients were transported as a result of the collision. Consequently, a total of three patients were transported to the local hospital.”

Earthquake damage in the valley

Lewis also commented on this month’s 7.1 magnitude earthquake on July 5.

“There was a power outage on the south end of the valley, and there were also several small brush fires that occurred from arcing energized power lines, which was related to the power outages,” Lewis said. “There were also medically-related issues from people not having access to their oxygen machines because of the power outage and also some fall victims. Station 3 on the south end of town also lost power and we were prepared for that. We opened our doors and made sure that the apparatuses were still good to go.

Additionally, Lewis said crews were dispatched to investigate damages caused by the earthquake, throughout the town.

“An assessment of the valley revealed damage related to a possible water pipe break in the area of Dandelion and Ambush streets,” he said. “There were several service calls for investigations into cracked walls, interior drywall and exterior stucco. Obviously, there was a rolling effect from the earthquake which was felt throughout the valley.”

On July 6, crews were dispatched to a structure fire in the area of Barney Street and Brick Lane just after midnight.

“As crews arrived on location, they found a fully-involved travel trailer that was placed on the west shoulder of South Barney Street,” Lewis said. “There was no one around it and there were no other utilities or power sources around. Apparently, it was in tow at one point and was abandoned there. The fire is suspect in nature and there were no injuries.”

Later in the day, fire crews were summoned to the 4000 block of West Venus Street for a reported structure fire at approximately 2:40 p.m.

“Crews arrived to find a travel trailer that was converted to a fixed-use dwelling which was fully involved and extending to a closely-placed conex container, which was also converted for a fixed-use residence,” Lewis said. “All occupants were accounted for, however, one civilian occupant sustained burns to the bottom of their foot. He denied medical treatment. The fire was quickly controlled with no further extension. The cause of that fire is under investigation.”

On Tuesday, July 9, emergency crews responded to a residence on West Betty Street after a 2-year-old toddler was discovered unconscious in a swimming pool, at approximately 1 p.m.

Lewis said the child had been in the pool for an unknown amount of time.

“Crews performed resuscitative efforts and transported the patient to Mercy Air and that patient was flown to UMC Pediatric Trauma,” Lewis said. “It reminds us to make sure that pools are secured and have appropriate fencing or alarm systems. Obviously, there should be appropriate supervision at all times. If an accident were to occur, 911 should be called immediately to get the resources there as soon as possible. It turned out to be a near-drowning but it was reported as a drowning.”

On July 11, fire crews were dispatched to a large brush fire in the area of Harris Farm Road and Leslie Street just after 2 p.m.

Crews arrived to find four separate fires, covering approximately 1-1/2 to 2 acres of mixed fuel brush,” Lewis said. “While there were no immediate structure exposures, crews did protect personal property, which was stored near the fire. The investigation revealed that most likely a bird had come in contact with the energized wires causing an arc and igniting the nearby brush. There were no injuries and crews were committed to that service call for approximately 2-1/2 hours for a complete suppression and overhaul.”