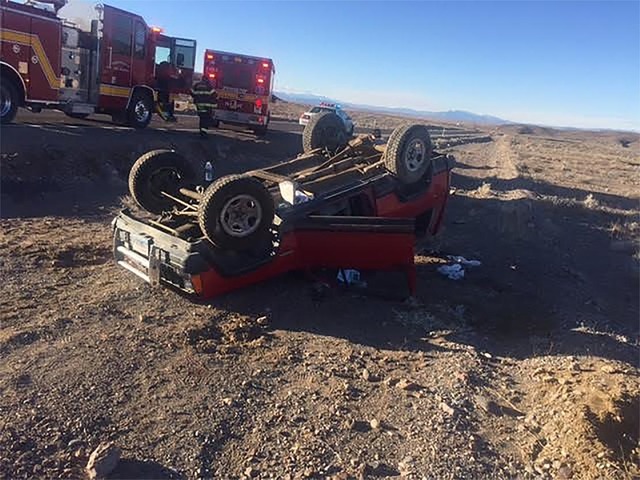 The driver of a red Jeep was transported to Desert View Hospital following a rollover crash along Bell Vista Road near Ash Meadows last Wednesday. The unidentified driver is expected to recover from the injuries. Special to Pahrump Valley Times

Pahrump medics returning from a transport in Las Vegas happened upon a single-vehicle rollover crash on Highway 160 on Monday, Jan. 23.

“Crews came upon the accident at the top of the mountain,” he said. “We had some inclement weather that day, so there were numerous accidents in the immediate area. The assessment revealed there was no entrapment, however, there were several walking wounded who remained on location pending the arrival of the Clark County Fire Department and the Nevada Highway Patrol.”

Hours later, Lewis said fire crews were summoned to another rollover crash on the highway at mile marker 27 in Nye County.

“At 7:23 p.m., crews were dispatched for a single-vehicle rollover accident, where Medic 5 found that the driver of the car had self-extricated,” he said. “The patient did have a need for medical assessment, however, they decided to decline medical transport.”

On Tuesday, first responders were dispatched to a residence on Russell Road for a report of a structure fire.

“Upon arrival, crews found a malfunctioning heating unit within the dwelling,” Lewis said. “The unit itself, while demonstrating signs of fire, was quickly extinguished with no extensions to the primary dwelling.”

One person was transported to Desert View Hospital following a single-vehicle rollover crash on Wednesday afternoon just after 3 p.m.

“We were dispatched for report of an injury motor vehicle accident along Bell Vista Road in the area of Ash Meadows,” Lewis said. “Upon arrival, crews found a single-vehicle rollover accident. The occupant had self-extricated and that patient was transported to Desert View Hospital.”

On Thursday afternoon fire crews were dispatched for a report of an injury motor vehicle crash at Charleston Park Avenue and Bannavitch Street.

Upon arrival, crews found a T-bone type accident with no entrapment.

Lewis said at least one patient was injured, however, they declined medical transport.

Also on Thursday fire crews were summoned to Highway 160 near Basin Avenue after a car versus pedestrian collision just before 6:30 p.m.

“Upon arrival, crews found one injured person who had been struck by the vehicle,” Lewis said. “That patient was subsequently transported to Desert View Hospital.”