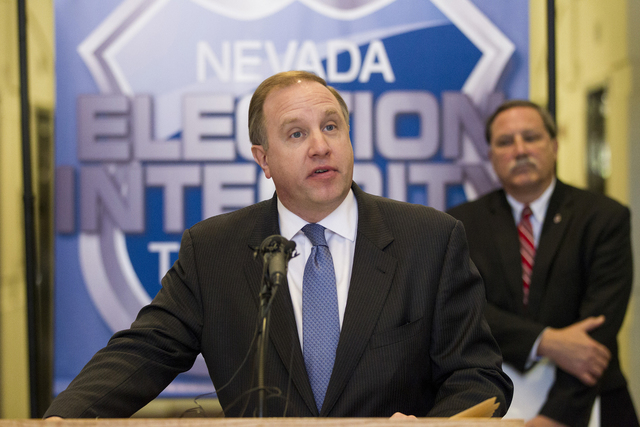 While Republican presidential nominee Donald Trump has spent recent weeks claiming the entire election is “rigged,” the state’s top election and law enforcement officials assured Nevadans on Tuesday that their votes are safe from fraud.

At several recent campaign rallies over the past few weeks, Trump has run with the rhetoric that voter fraud is a serious problem. He has encouraged his supporters to “go around and look and watch other polling locations,” which has raised concerns about voters feeling intimidated at those voting spots.

Rouse, while not specifically referring to Trump, said such perceptions would cast doubt about the validity of the nation’s elections, which would only undermine the governmental process upon which the United States is built.

Nevada U.S. Attorney Daniel Bogden said there would be task force command centers in Reno and Las Vegas that will field complaints and respond to reports of voter intimidation or fraud at election centers on Nov. 8, Election Day, and at during early voting, which starts Saturday.

Nevada Secretary of State Barbara Cegavske, the state’s top election official, said the task force will have roaming members who will go site to site as any reports of fraud or intimidation come in. She also said that no one from the Trump camp has reached out to her office about the possibility of mass voter fraud.

Rouse also noted national news stories about recent cyberattacks on election systems in Florida and Illinois, where voters’ personal data might have been stolen.

But Rouse said Nevada voters should have no fear about hacking in this state.

Rouse said voting machines used in Nevada are not connected to the internet or any kind of network, which makes hacking them “physically impossible.”

He also said that since 2004 when the new system was implemented, there have been zero errors detected.

“The bottom line that Nevadans should know is on Election Day, your vote is safe,” Rouse said.