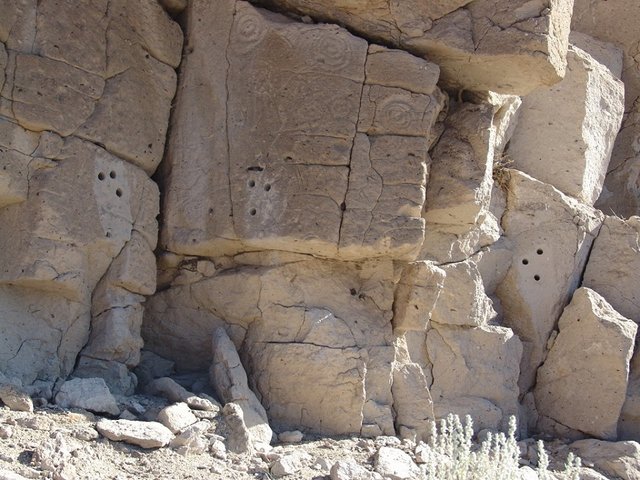 A federal investigation is underway into what is described as the defacement of a petroglyph site in Esmeralda County, a local business is reporting. The Esmeralda Market, RV Park, Cabins and Campground near Dyer posted photos on its Facebook page on June 17, showing holes drilled in the petroglyphs. Greg DeDera/Special to the Pahrump Valley Times

DYER  A federal investigation is underway into what is described as the defacement of a petroglyph site in Esmeralda County.

The Esmeralda Market, RV Park, Cabins and Campground near Dyer posted photos on its Facebook page on June 21, showing holes drilled in the petroglyphs.

When we first came across the holes drilled in the petroglyphs (22 holes in the site), our thought was geology core sampling, the post said. It appeared professional equipment was used … But we could not imagine archaeologists or geologists doing such a thing to petroglyphs that have existed for thousands of years relatively untouched.

Nobody knew of any sampling going on, and no permits had been issued for such activity, the post added.

An investigator with the U.S. Bureau of Land Management is now involved, the Esmeralda County Business reports.

After speaking with the BLM officer in charge, he has advised us that this destruction of an archaeological site was done by a university geology department that was studying the flow of magma (Paleomag), its Facebook post said. The case is not closed and they are just starting their investigation.

The name of the university is not being publicly disclosed. Calls to the BLM were not returned.

Linda Williams, owner of Esmeralda Market, RV Park, Cabins and Campground, about 22 miles north of the petroglyph site, said in an interview that the holes were spotted in mid-June.

Hopefully what every Americans reaction would have been, she said of her reaction upon seeing the holes. Thats a complete sadness and gut-wrenching emotions because one of the actual artifacts was tampered with, and that destroys a story from thousands of years ago that was being told in writings.

I cant say what made a person do that, she said. I can say they were not attentive to their surroundings, obviously, or they would have looked up and saw what they were doing.

Williams, who oversees a Fish Lake Valley heritage center in her community, said the initial web post intended to make people aware of the situation.

At the time, we didnt know who had done it, she said. We didnt know if it was something being done for profit somewhere. We wanted to do everything we could to network it out and let people know that this was something that was occurring and to be aware, to be stewards of their land.

I have done everything in the last 60 years that I have lived in this community to protect the artifacts, the history, the land and everything else, Williams said. That is why it was gut-wrenching to me and made me ill for several days until we actually got to the bottom and discovered what was going on.

We want to make sure it doesnt happen again, she added. That is why we are working strongly with the BLM to be assured that this will never happen again, not just twice in a matter of two years.

She said that about two years ago another similar petroglyph incident had occurred in California just over the border from us.

If the lack of education of their surroundings and American history and world history is whats causing this problem, they need to start re-educating people, Williams said. If inattentiveness to your surroundings is what the problem is, then they need to give that a lot more thought as well. To simply take away a complete culture is wrong.