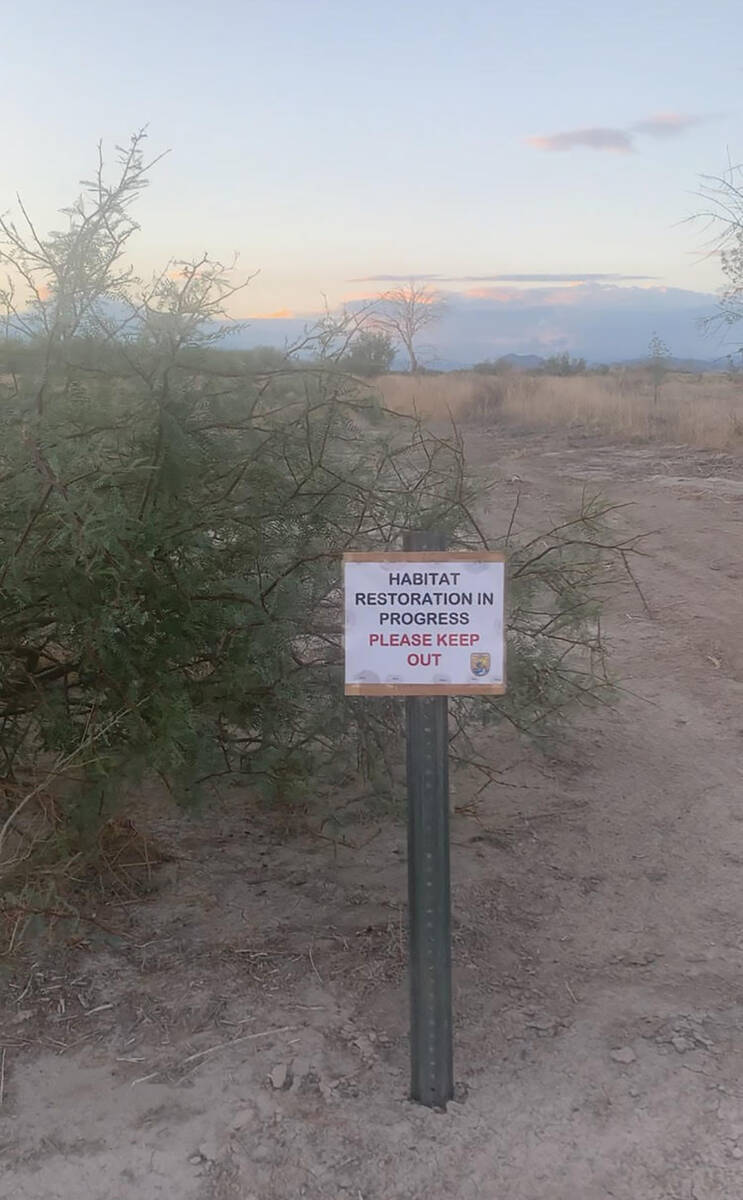 Special to the Pahrump Valley Times U.S. Fish and Wildlife staff recently put up this sign in reaction to the activity the Fuentes' have undertaken to restore their water. The longstanding battle between the husband-and-wife team and the federal agency continues. 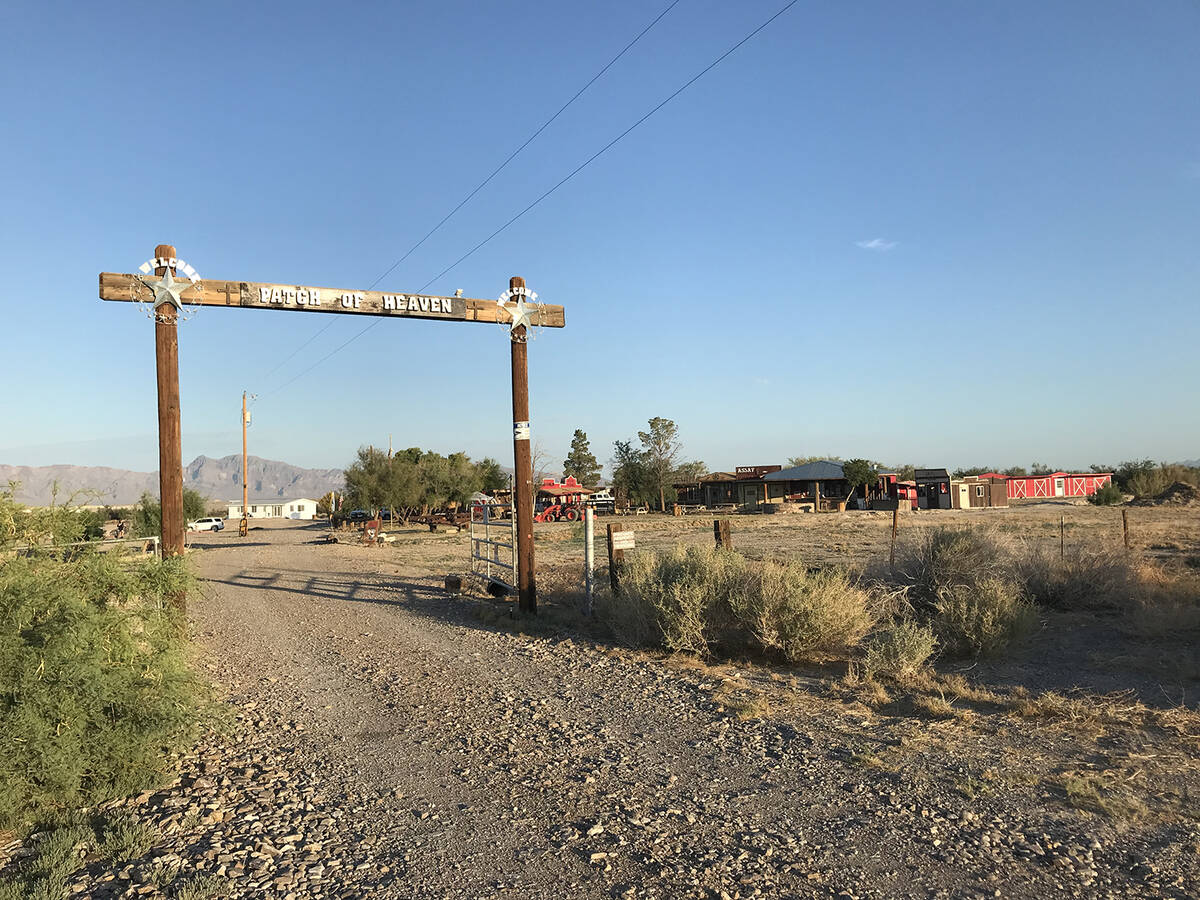 Robin Hebrock/Pahrump Valley Times Patch of Heaven is a 40-acre parcel of private land inside of the Ash Meadows National Wildlife Refuge. 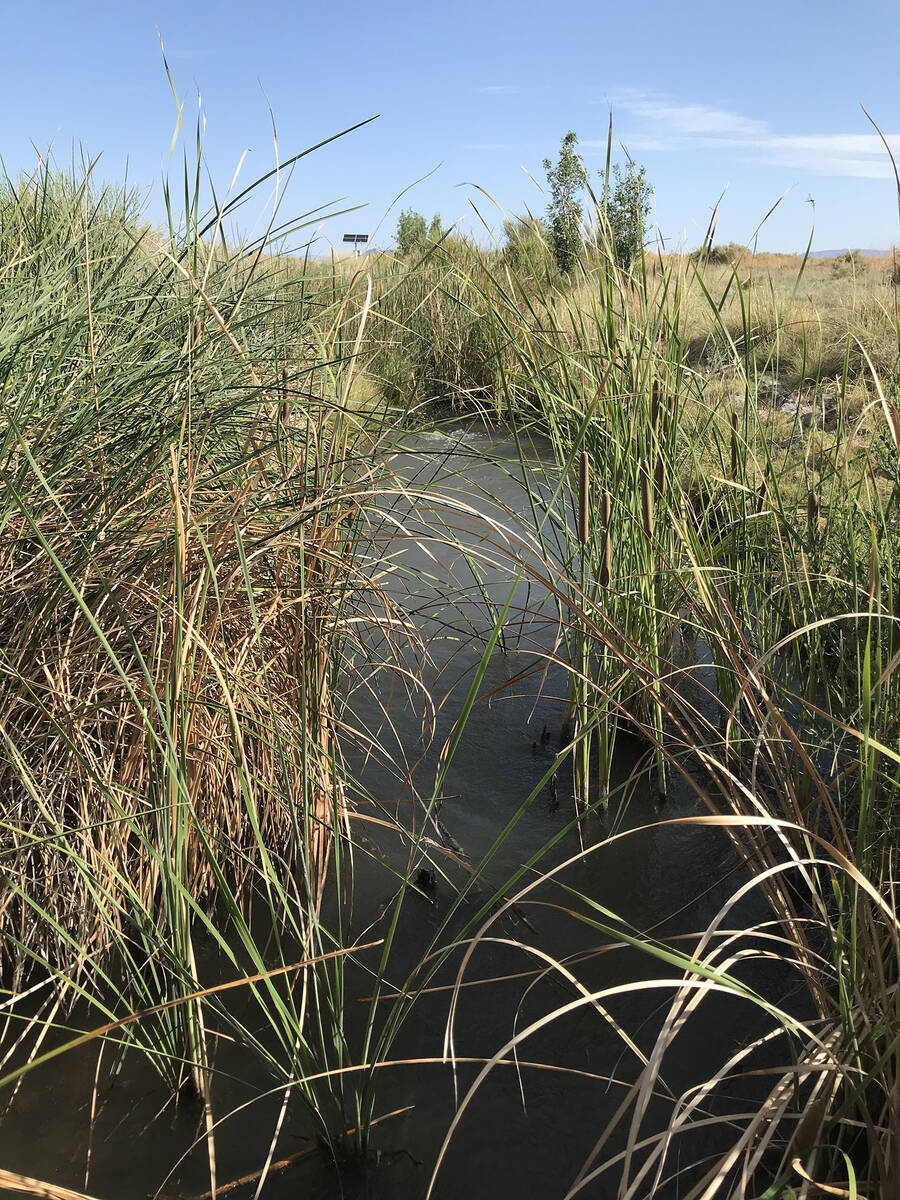 Robin Hebrock/Pahrump Valley Times This photo, taken July 30, shows water from the Carson Slough, which was diverted from its original path by Fish and Wildlife in 2010. The Fuentes' have been striving to have that water returned to their land for years.

On July 30, Victor and Annette Fuentes started the process of returning water to their Patch of Heaven Christian Camp following years of legal struggles but it seems that the U.S. Fish and Wildlife Services is not about to stand back and simply allow the couple to do as they wish.

In a letter dated Aug. 4, Fish and Wildlife notified the Fuenteses that the agency was investigating the couple’s recent actions and aims to reverse the work that Victor has undertaken to restore the historic flow of the Carson Slough.

“I am writing in regard to trespass activity at the Ash Meadows National Wildlife Refuge on Saturday, July 30, 2022 that originated from your property and impacted refuge land north of your property line,” the letter from Fish and Wildlife states. “It appears that this activity is directly related to the gathering you organized on this date with the intent to breach the Fairbanks Spring channel in the Carson Slough and redirect water from the refuge to your property.”

Fish and Wildlife accused the Fuenteses of damaging the land and wildlife habitat, noting that their rediversion of the water moves the water away from aquatic habitat that is home to two endangered species, the Ash Meadows speckled dace and the Ash Meadows Amargosa pupfish.

The letter goes on the say that Fish and Wildlife had notified the Fuentes’ on July 28, and reiterated during a conversation with the couple on July 30, that anyone found to have trespassed on refuge lands would be in violation of the National Wildlife Refuge System Administration Act, and possibly other federal laws. It notes that the actions taken by the Fuentes’, “…may have violated the Endangered Species Act…”

“The alleged trespass, damage to refuge resources and Endangered Species Act violations are now under investigation. If you or any party undertake additional illegal actions, the United States will take appropriate action, including seeking penalties and damages,” the letter warned.

The letter also asserts that the Fuentes’ have impacted water rights held by Fish and Wildlife service, which the agency has reported to the Nevada Division of Water Resources. This seems contrary, however, to the order issued by the Nevada state engineer in 2017 which explained that the Fuentes’ hold senior vested water rights, which take priority over those held by Fish and Wildlife, and therefore the federal agency must return the water to the Patch of Heaven property.

“U.S. Fish and Wildlife staff will be restoring the land and wildlife habitat on the refuge damaged by these actions, including repairing the breach in the Fairbanks Spring channel and backfilling the diversion ditch. To allow the land and habitat to recover, all entry to the refuge land north of your property is prohibited,” the letter concludes.

In addition to having to deal with push-back from Fish and Wildlife, the Fuentes’ have lost their attorney as well, with Annette explaining, “We no longer have legal representation. They terminated our contract because of Victor doing what he did. What he did is within the scope of law but attorneys are subjected to the principles of their legal foundation. We, however, uphold the U.S. Constitution and principles of law and our rights.”

It is unclear exactly what will happen now but Annette assured the Pahrump Valley Times that she and Victor have no intention of backing down. They feel they have no choice but to continue with their plans to restore the Carson Slough, otherwise they will never see a return of the water to which they have a right.

“As you know, Fish and Wildlife sent us their threatening letter, but threatening letters do not hold the power of law,” Annette said. “We will continue to keep fighting for our rights at all costs. We have a lot of faith in our local authorities in helping us to do so, as they have done from day one.”

Previous coverage regarding Patch of Heaven’s fight against Fish and Wildlife can be found at pvtimes.com.