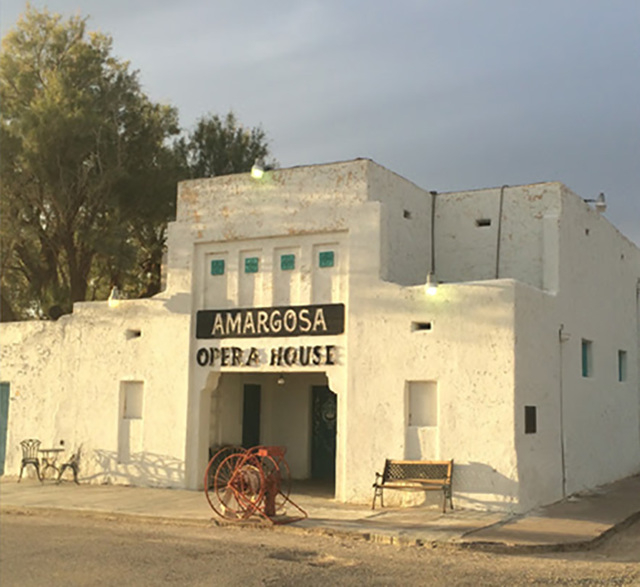 An event aimed at helping the ongoing repair and restoration work at Death Valley Junction will take place in Amargosa Valley tomorrow.

On Thursday, the new Amargosa Cafe and the Amargosa Opera House will host a film-screening event, which will feature the documentary, “Mona Lisa is Missing.”

There will be a dinner served at 5:30 p.m. at the cafe before the screening takes place at the Amargosa Opera House at 7 p.m.

The dinner will cost $25 for those interested and the price to attend the film screening is $20.

Brooke Van Natta of the Amargosa Cafe said the event came to light after someone the two parties knew brought the film to their attention.

“It was through a mutual friend with the filmmaker,” Van Natta said. “They sent us screeners and we all watched it together with Marta Becket and we all decided that it fit the atmosphere well and that it would be great to screen it in the opera house.”

The film is about filmmaker Joe Medeiros’ obsession with the 1911 theft of Leonardo da Vinci’s painting, the Mona Lisa from the Louvre museum in Paris, France.

Medeiros traveled to Italy and France with his wife Justine Medeiros, who is an executive producer on the film, trying to find out the motive for the theft and they speak to the daughter of the thief, Vincenzo Peruggia.

This is the first time the opera house will screen a film outside of the documentary on the area titled “Amargosa,” and if it goes well, Van Natta said it could be something that is a reoccurring event.

Both Joe and Justine Medeiros will be in attendance at the event and will hold a question and answer session in the café following the screening at the theater. Dessert will be offered during the Q&A session.

“Prior to the 7 p.m. screening, we will serve a set-menu dinner in the café …the inaugural dinner! The menu will follow the French/Italian theme of the film, and a vegetarian option will be available. Please make reservations so we know how much food to prepare! Dinner is at 5:30 p.m., includes appetizer, main course and dessert (which will be served after the film at the Q&A) and is $25.”

Aside from the documentary showing this week, the performance season for the Amargosa Opera House will conclude Memorial Day weekend.

Before the season concludes there will be a live music, ballet performance the week prior. From Friday, May 20, until Sunday, May 22, Jenna McClintock is featured dancing in Marta Becket’s ballet pantomime. The performances begin each night at 7 p.m. and tickets are $20.

There is also a pre-dinner set up before each of the shows beginning at 5:30 p.m. for $25. The meals will feature a set menu and reservations for those attending the performances are required.

To get more information on any of the events or to make dinner reservations call the Amargosa Cafe at 760-852-4441.