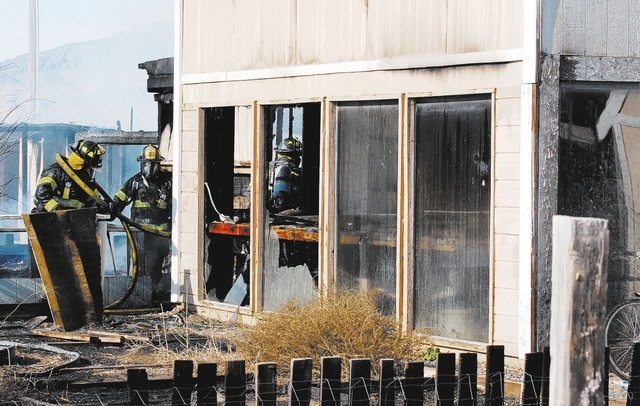 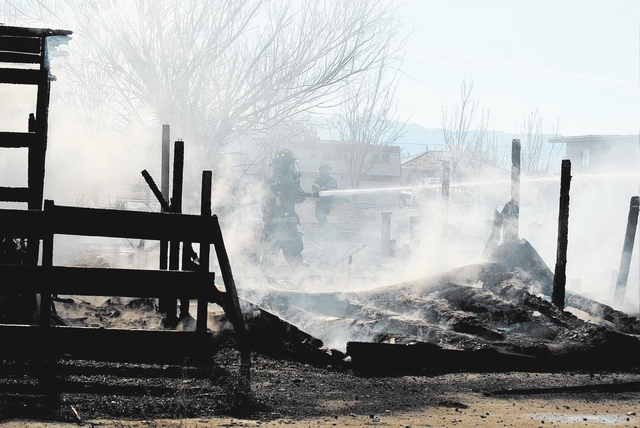 Authorities say improperly disposed of cigarettes are to blame for a fire Monday that destroyed several structures located at a property on Leffner Drive.

Pahrump Valley Fire Rescue Services and the Nye County Sheriff’s Office were called to the location just after 11 a.m. for the report of a brush fire that had apparently spread to two buildings.

The incident was soon upgraded to a structure fire as crews drew closer to the area and noticed a change in the smoke coming from the address.

“It went out as a brush fire to begin with and then on the way we upgraded it to a structure fire because it was reportedly close to two immediate structures and the way the smoke changed it looked like it had already reached those structures,” Fire Chief Scott Lewis explained.

Once PVFRS arrived on scene they quickly got the flames under control, limiting the damage to two shed-like buildings and preventing the fire from spreading to a nearby residence.

After the fire had been put out, firefighters worked to knock down the smoldering remains of the two burnt structures.

Although no injuries were reported, one man was evaluated by medics at the scene.

“We thought he was (injured) at first, but we discovered it was most likely due to intoxication, not anything having to do with the fire,” Lewis said.

Following a preliminary investigation into the incident, the fire chief said it appeared the fire started on the ground near the back of the main residence after the homeowner had improperly disposed of his finished cigarettes by throwing them out into the yard.

“It started as a ground fire near the main structure and now we’re looking at improperly discarded smoking materials as the cause,” Lewis said.