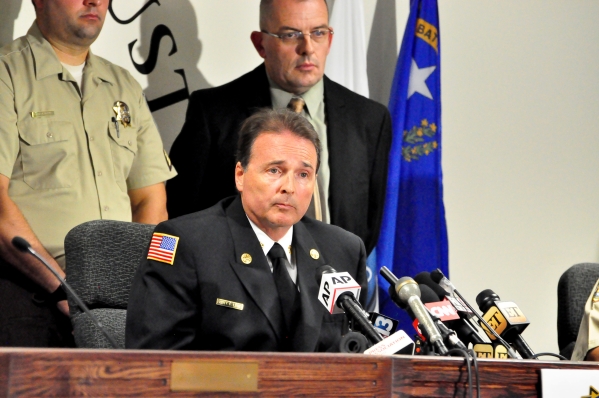 With each holiday season comes the joy of being with family and friends, but the holidays can turn tragic if common sense takes a back seat to Christmas festivities.

Lewis noted that fire crews recently responded to a structure fire after the residents of the home failed to take the necessary precautions while using the fireplace.

He noted the chimney was not cleaned on a regular basis and the homeowner failed to open the flue before starting the fire.

“When they did open the flue, it caught the chimney on fire because they had not had it cleaned regularly,” he said. “Crews responded to that fire and protected the remainder of the structure and quickly extinguished the fire but they had to go from the rooftop and work from the chimney on down to extinguish that fire.”

He also said homeowners who have fireplaces should have their chimneys inspected annually if they plan on using it during the winter months, as birds and other creatures often use them as nesting areas.

Additionally, Lewis said homeowners need to consider burning only hardwoods in the fireplace and cautioned about burning other materials.

He cautioned that Mesquite and similar woods contain a lot of oil bases which can build up on the inside of the chimney.

“People should not burn their household trash inside their fireplace,” he said. “It should be hardwoods only or the Duraflame type logs. We have seen numerous instances where people think that it’s a great way to heat their houses and get rid of their trash especially around Christmas when they burn the wrapping paper and boxes, which is never a good idea.”

Another source of heating the home is the common space heater.

Lewis said homeowners should do their due diligence while using the appliance, which is the cause of many wintertime structure fires.

“You always want to make sure somebody is in the area and watching it at all times during its use,” he said. “You want to make sure you do not use extension cords with space heaters and they are used with an approved outlet that can handle the amperage. You also want to read the box to see exactly what kind of draw you are placing upon your electrical system to be sure it’s capable of handling that.”

Kitchen mishaps were another area of concern.

Lewis said local fire crews routinely respond to cooking accidents during this time each year where dishes can boil over inside ovens and broilers.

“You should always keep your eyes on what you’re cooking and especially keep children away from the cooking area,” he said. “You want to make sure you turn the handles of your pans inward so they are away from the edge of the stove because when someone does walk by, they won’t knock it on themselves. We have seen this where children or the elderly are scalded by materials.”

“Another big issue are microwave ovens that are mounted over the stove,” he said. “There are heating materials inside the dish and as they pull it out they dump it on themselves resulting in serious burns.”

The true symbol of Christmas is the Christmas tree, which can create its own set of dangers.

Lights strung on a Christmas tree, real or artificial, should be inspected for damage as they too can spark a fire.

Trees should also be steady in their stand to prevent falls and injuries.

“When using an artificial tree, Lewis said to make sure the tree, including the wiring is in good shape to prevent an electrical fire,” he said “When using a real tree, make sure it’s well hydrated because wood is fuel and a dry tree can spark flames. Water in a tree should be checked daily.”

Lewis said exterior Christmas lighting should be rated for outside use, and also checked for damage to prevent a fire.

“It’s also important to not overload extension cords if they are in use,” he said. “With any type of external Christmas lighting, the homeowners want to make sure it’s LED as far as the light bulbs. You also want to make sure you don’t overload any one given circuit. We just want everyone to have a safe and Merry Christmas.”