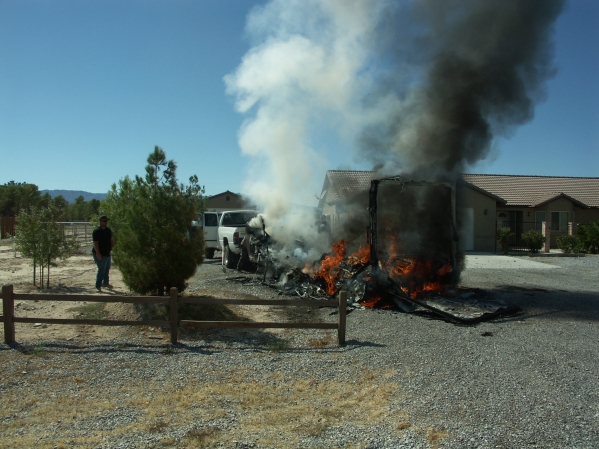 Resident Bob Adams has his neighbors to thank for helping to put out a trailer fire before flames engulfed his Dodge pickup truck.

Adams was returning home after a day of riding his dirt bike when the trailer caught fire shortly after he was pulling onto his property at 7770 Quarterhorse Ave., when the trailer went up in flames Saturday afternoon.

He said he’s unsure how the fire started.

“My main complaint is that it just took the dispatcher too long to get the fire department here,” he said. “I had a 911 dispatcher who wanted to argue with me. She didn’t want to dispatch it because it was just a trailer. It doesn’t matter that it wasn’t a house fire because if a trailer is on fire then they need to dispatch it to the fire department.”

Nye County Commissioner Dan Schinhofen said on Tuesday that he would prefer to speak to an official in the county’s dispatch center before commenting.

As smoke filled the sky, roughly a half dozen neighbors jumped in to help douse the fire with buckets of water and a garden hose, while a half dozen more were watching from their respective homes.

Though the effort was futile to save the trailer and its contents, Adams and his neighbors were successful in unlatching the trailer before flames engulfed the pickup.

Adams, meanwhile, also said he doesn’t hold any animosity toward the dispatcher which he admits, he read the “riot act” to the individual while on the phone.

“I’m not planning on suing the county because it seems everybody wants to sue our county,” he said. “I’m not asking to have the dispatcher fired, but when somebody calls in regarding a trailer fire they just need to dispatch the fire department that’s all.”

Additionally, Adams said the situation may have been much different had his neighbors not reacted as they did.

Adams noted that though he’s not as passionate about riding his dirt bike as he once was, he said all of the contents inside the trailer were a total loss.

The big ticket item was the Yamaha WR450f, designed for motocross racing.

The trailer, he said, was purchased several months ago.

“Everything I had in the trailer is gone,” he said. “Even if someone loaned me a bike right now, I lost my riding gear, including my boots, helmet and chest protector. Even my tools were in there.”

Additionally, Adams wanted to thank those who helped fight the fire, some of which he didn’t even know.

“They were just neighbors and I didn’t even know half of them,” he said. “I am really grateful for their help. When a neighbor’s in trouble, everybody shows up in this neighborhood.”