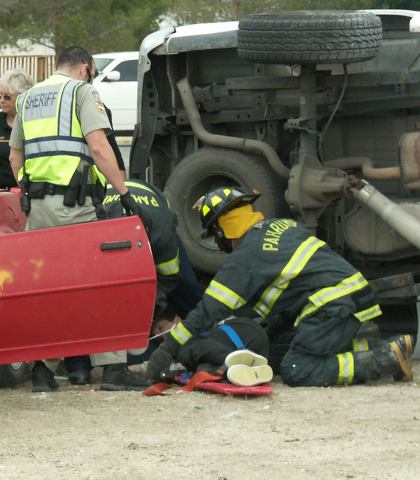 At least two local firefighters found themselves on the receiving end of medical treatment during a training exercise on Saturday.

The firefighters were overcome by the weekend’s extreme temperatures, which hit 113 degrees on Saturday, while performing training exercises.

Pahrump Valley Fire and Rescue Chief Scott Lewis said the men were evaluated then transported to Desert View Hospital for medical treatment after becoming overheated while carrying out a vehicle extrication exercise.

Lewis noted that the crew members got too hot as a result.

“We always medically evaluate anyone who is not feeling well afterwards and they were taken to the hospital by our crews,” he said. “They weren’t necessarily hurt but they became dehydrated from the heat after the training. Once they arrived at the hospital they got some IV lines going. They returned afterwards but we release them from duty for the rest of the day.”

Lewis said medical crews have been responding to numerous calls for residents who were also displaying symptoms from the intense daytime heat.

“Quite frankly we’re experiencing the same issues within the community,” he said. “We are receiving a number of calls regarding people who are dehydrated and suffering from mild heat exhaustion and that seems to be the majority of our calls as of late.”

“We had several accidents over the weekend but none of them were really serious,” he said. “They were rollover accidents where one vehicle actually rolled over but continued to drive away. “We had another rollover accident on the far south of Highway 160 but the Nevada Highway Patrol canceled us on that call because it was a non-injury accident.”

The extreme heat also caused what could have been a destructive residential fire on Saturday.

“That came out as a structure fire on Saturday but ended up being a box of aerosol cans on the back porch of a property which was subjected to the sunlight and heat,” he said. “One of the cans exploded and set a small fire within the box but it did not extend to the structure. Over the weekend the majority of the calls were regarding people who are not feeling well due to the heat and we can expect conditions like that all week long.”

The fire chief also said extra efforts will be made to avoid what occurred during the weekend’s training exercise.

“They are going in environments where there is no air conditioning so we are trying to watch them as closely as we can,” Lewis said