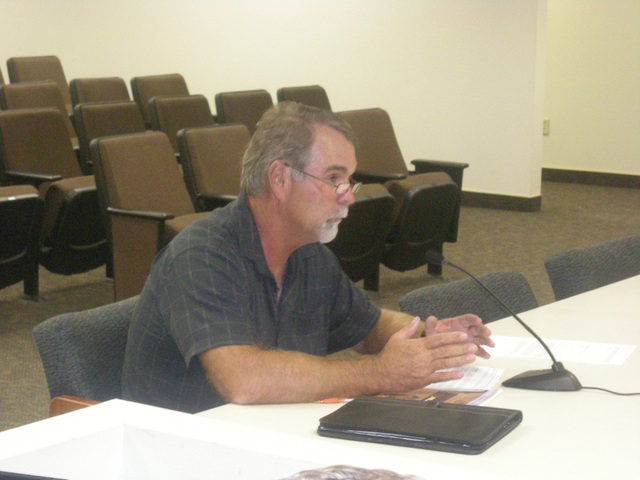 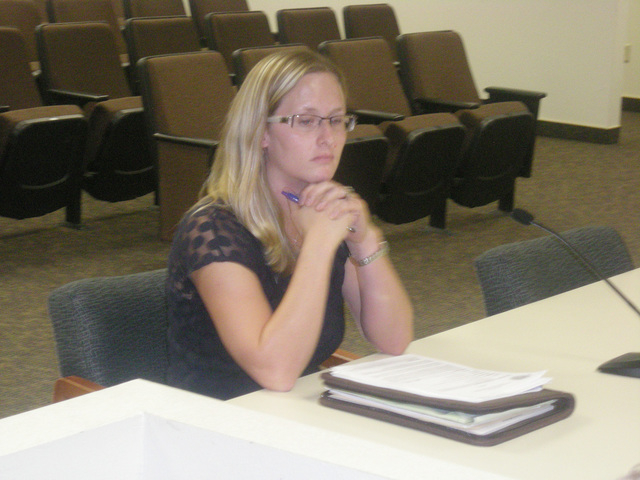 The first two requests to rezone property for medical marijuana establishments were recommended for approval by the Pahrump Regional Planning Commission Wednesday.

Both properties are located at the southernmost end of Pahrump Valley.

The RPC approved a zone change for Champ Roach, who said he produces 2,000 pounds of basil per month at his 30,000-square-foot greenhouse on 13.58 acres at 9680 S. Oakridge Ave., from the village residential zone to a rural estates residential zone with a business opportunity overlay, that permits medical marijuana cultivation facilities.

Roach’s operation was grandfathered into the former VR-20 zone, designed for residential neighborhoods with minimum 20,000-square-foot lots that didn’t permit agriculture; the greenhouse was built in 1990.

The property owner of the eight acres is K &K Properties Group, owned by Ken Kesick. Roach will also require a special use permit to be approved by the Nye County Commission, a Nye County medical marijuana business license and approval by the State of Nevada Division of Public and Behavioral Health.

Roach’s application was approved almost without discussion. RPC member Greg Hafen II only wanted an assurance the new RE-2 rezoning was in conformance with the existing master plan.

But John and Linda Parko, who said they were the original owners of the property and still own seven parcels there, objected in writing.

“We thought that the covenants we originally drew up were recorded but they never were. Our original intent was for the property to be residential with no businesses. In the ensuing years we have approved of the greenhouse property to grow basil for commercial purposes,” the letter states. “We now however object to the changes to agricultural use. We have concerns that the adjoining property will also be trying to grow marijuana.”

“As retirees who look forward to living on one of (the) parcels next to this new endeavor, we strongly object to letting this first phase go through. These parcels were meant for residential use and the growing of marijuana will only cause many problems for the residents already living in the area and lower the property values for those of us who still own property there.”

They also expressed concerns over children visiting the area and security concerns.

Stephen Settlemeyer was given approval for a business opportunity overlay zone in a rural homestead zone that would allow a future medical marijuana cultivation facility at 3171 E. Tillman St. Settlemeyer had requested rezoning the 13.6-acre parcel to a rural estates zone, but planners said that wasn’t necessary.

The RH 4.5 zone is also in conformance with the existing master plan and the master plan update. It contains a 54,050-square-foot greenhouse built in 1959.

David Richards, president of CivilWise Services, said there will be major improvements in security and monitoring of the property with the medical marijuana growing facility. He said the zone change is compatible with adjacent land uses; it is situated just north of the brothels.

A neighbor, Charles Augustine, at 3131 E. Wall St., said he allowed people to trespass across his property to access Settlemeyer’s property, but said he is concerned after just undergoing open heart surgery, which caused him to consider moving.

“I don’t know what this new government change in marijuana will entail but I have great concern what goes on at the two properties,” Augustine said.

CivilWise representative Rachel Kryder said a waiver from a limit of 10,000 square feet of floor space in that zone was being considered administratively.

In that same part of town, Dan Harris was irritated at being told to wait for revisions to the Pahrump master plan to be adopted by county commissioners, before rezoning 29 acres at 2320 E. Fuchia Street and Oakridge Avenue from village residential to rural estates.

Harris wants the zone change to allow for agriculture on 9.7 acres, which isn’t permitted in the VR-20 zone, he wants to grow alfalfa. Longhorn cattle already graze nearby.

Deputy District Attorney Tim Sutton said the RPC couldn’t approve a zone change that wasn’t in accordance with the master plan. Hafen wanted to add a master plan amendment at Wednesday’s meeting, but Sutton recommended continuing both the zone change request and master plan amendment to a future meeting, they will consider both at their July 9 meeting, for speedy consideration by county commissioners July 15. Harris said his family wants to start farming in the fall and would like to get approval in the next month.

“We paid our dues, we come before you with a simple request for down zoning,” Harris said. “I understand there are some procedural issues but what am I going to do as an applicant? We have no idea when this is going to be approved. When is the county commission going to approve the master plan?”

Realtor Mary Greenspan received approval to rezone an acre at 520 W. Basin Ave. at Lola Street, near Desert View Hospital, from rural residential estates to neighborhood commercial, over planning objections there were no development plans. Greenspan said the area appeared to be spot zoned with four lots zoned neighborhood commercial and another zoned general commercial.

“I’ve already been speaking with a group of physicians who might be interested in putting a small clinic on that corner since it’s close to the hospital and it’s a perfect location for that,” Greenspan said.

Dorothy Hayes, daughter of the late Bill Griffin, who ran an auction business since 1998 until his death last year, was granted a zone change from rural estates to commercial manufacturing for a 1.36-acre parcel at 3221 E. Thousandaire Blvd.

Hayes said the 6,000-square-foot industrial building would suit a small business. If it can’t be, appraisals estimated the property would be worth $100,000 less as residential.