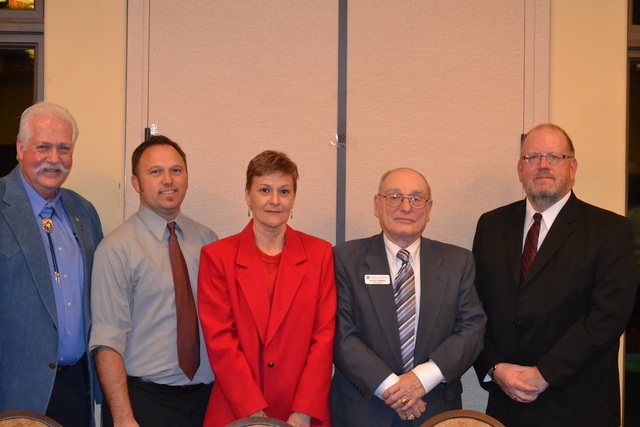 Five candidates are vying for the Valley Electric District 1 board of director seat.

Nick Moore, Allan Parker, Tim Wigchers and Marla Zlotek join incumbent Peter Gazsy in his bid for the slot. The candidates participated in a “meet and greet” event hosted by Valley Electric at Mountain Falls Golf Club in Pahrump last Thursday. There, the candidates answered questions regarding their qualifications and introduced themselves to customers, who are also member-owners, of the company.

Six-year incumbent Gazsy says that he devotes an average of 60-hours a month to the position. In addition, he said, he volunteers for other civic organizations including the Knights of Columbus and Shriners. He is seeking re-election, he said, as an opportunity to continue to serve the customers of the company.

A self-characterized Pahrump lifer, Moore, who owns three local businesses, said he has always been community-minded and would love to be more involved in Valley Electric. “I’m game,” he said.

Parker, who moved to the Pahrump in 2001, said he has worked in senior executive business positions in the corporate world for the past 35 years and has taught graduate level college courses. He also serves on the Nye County Regional Economic Development Authority and the Pahrump Advisory Committee for Great Basin College.

Wigchers, a resident of Pahrump since 2011, is the workforce director for the NyE Communities Coalition. In addition to his desire to tie his professional responsibilities to volunteer efforts, he brings a background of city alderman experience and program management for the American Lung Association to the table.

Zlotek, a county deputy district attorney, said she counts her life experience as well as a solid legal background in both criminal and civil matters as qualifying components for a director. Though she is very particular, she said, with how she commits her time, she is willing to take on any responsibilities associated with that of director. She has also served as an instructor for the Community College of Southern Nevada and the Nye Regional Training Academy.

The candidates answered a series of 11-pre-screened, prepared questions on an alternating basis, which ranged from their business background and qualifications to how they envisioned their role as a director.

Moore said that if he were to hold the director position, each customer would have a voice in the company. Parker, Wigchers and Gazsy saw themselves in a policy setting role while Zlotek said that as a director she would represent the company to the best of her ability balanced with listening to concerns of members.

All candidates have lengthy business backgrounds and explained how they would integrate that experience into the director role. Each spoke on corporate financial forecasting that Valley Electric incorporates into its business model.

Moore said that though he does not have corporate finance experience, he has simultaneously managed the finances of three businesses with success. Gazsy shared that because of a Valley Electric decision to refinance a power purchase agreement last year, the board was able to avoid a rate increase until 2018. Drawing on his past experience, Parker suggested that an analysis be done of the various revenue streams to maximize returns to company stakeholders. Like Moore, Wigchers and Zlotek admitted that though the do not have corporate finance experience, they are both willing to rely on the expertise of the company’s management team.