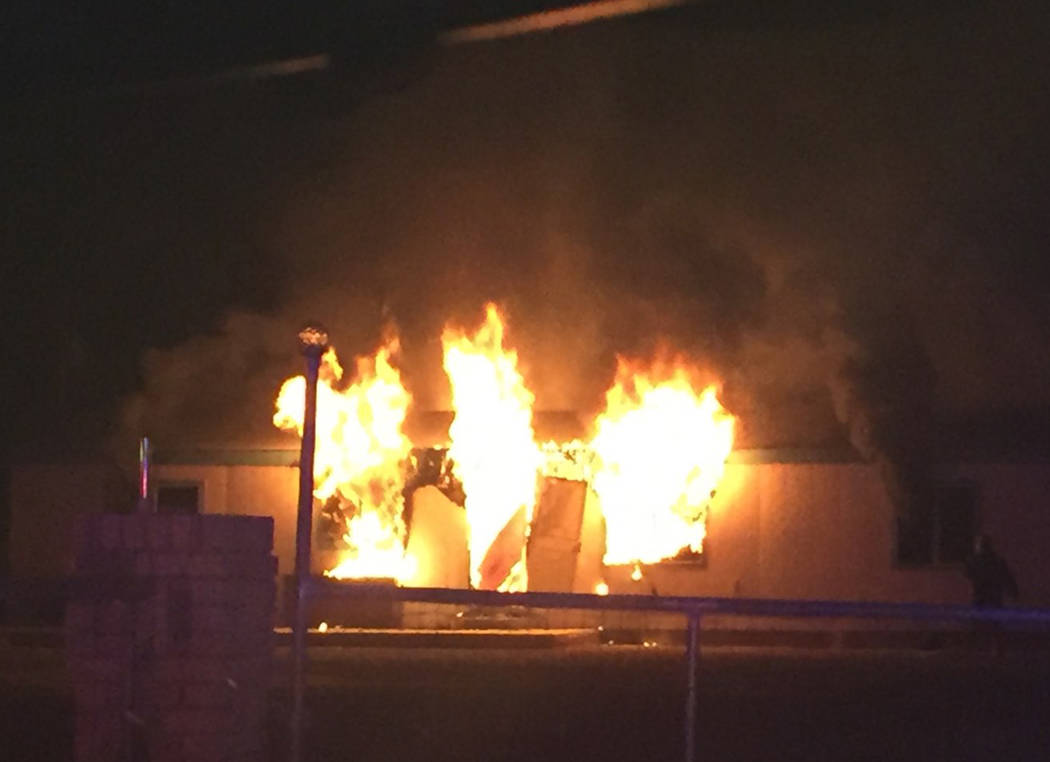 Special to the Pahrump Valley Times Four dogs perished in a structure fire along the 1400 block of West Dyer Road just before 8 p.m. on Thursday Oct. 31. Chief Scott Lewis, who sustained injuries while battling the blaze, said the cause was most likely accidental in nature related to activities of the occupants. 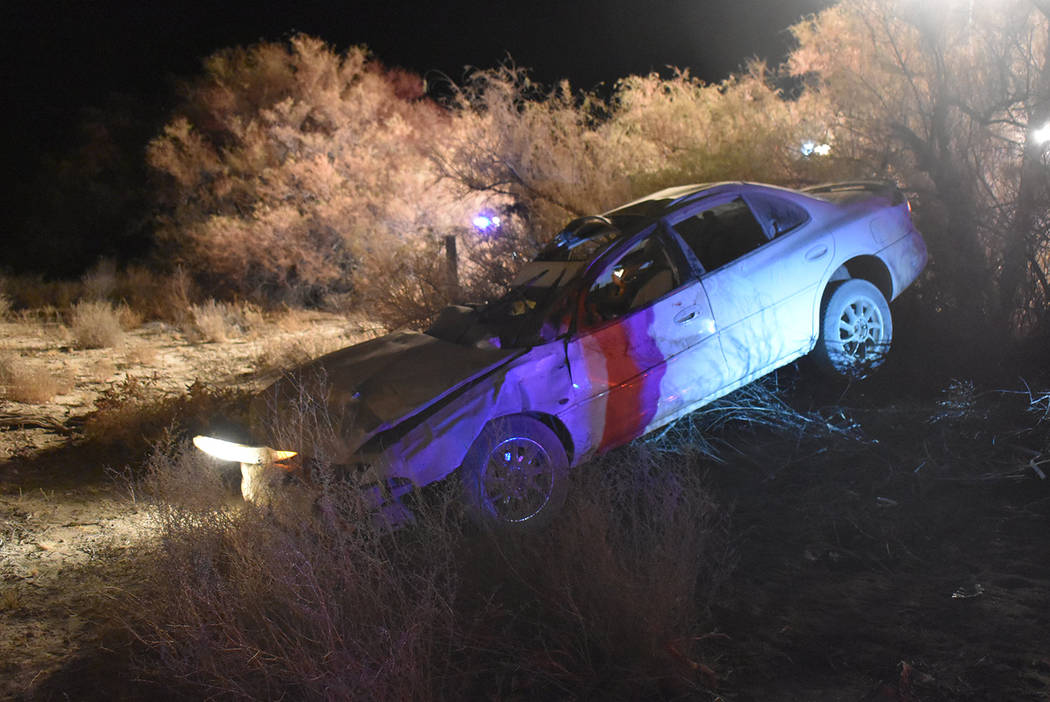 Special to the Pahrump Valley Times Two people were transported to University Medical Center in Las Vegas following a single-vehicle rollover crash in the area of Manse Road just before 7 p.m. on Friday Nov. 1. The Nye County Sheriff's Office is investigating the incident. 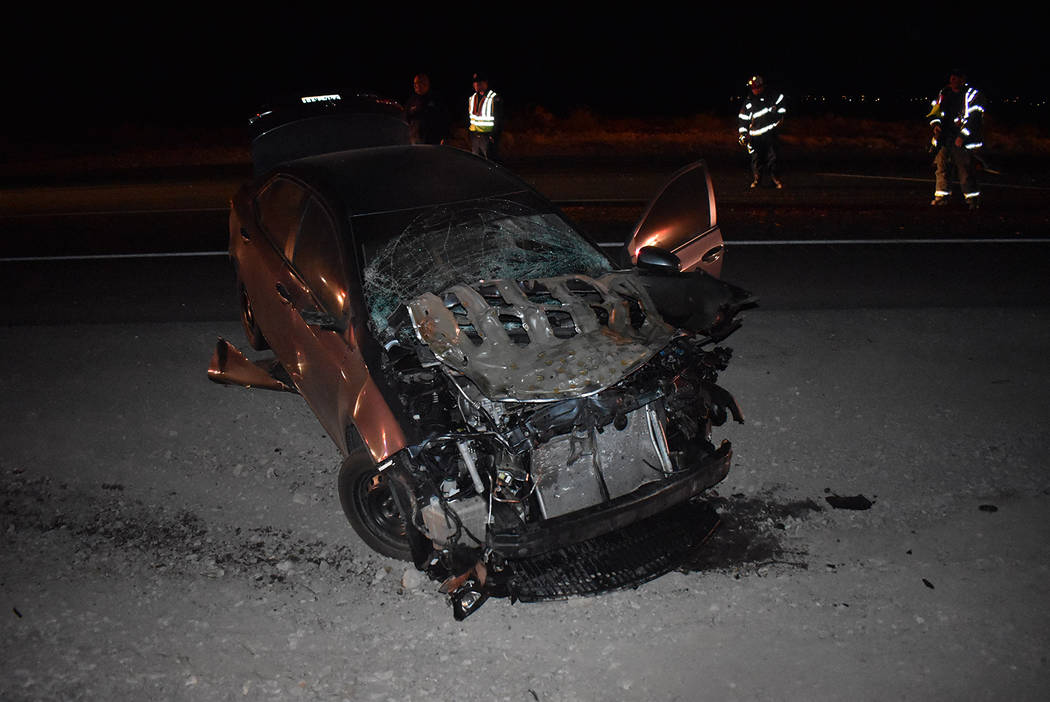 Special to the Pahrump Valley Times A vehicle sustained extensive damage after striking and killing an elk while traveling along Highway 160, in the area of Osky Street at approximately 7:30 p.m., on Sunday Nov. 3. The occupants of the vehicle, according to Fire Chief Scott Lewis were not injured. 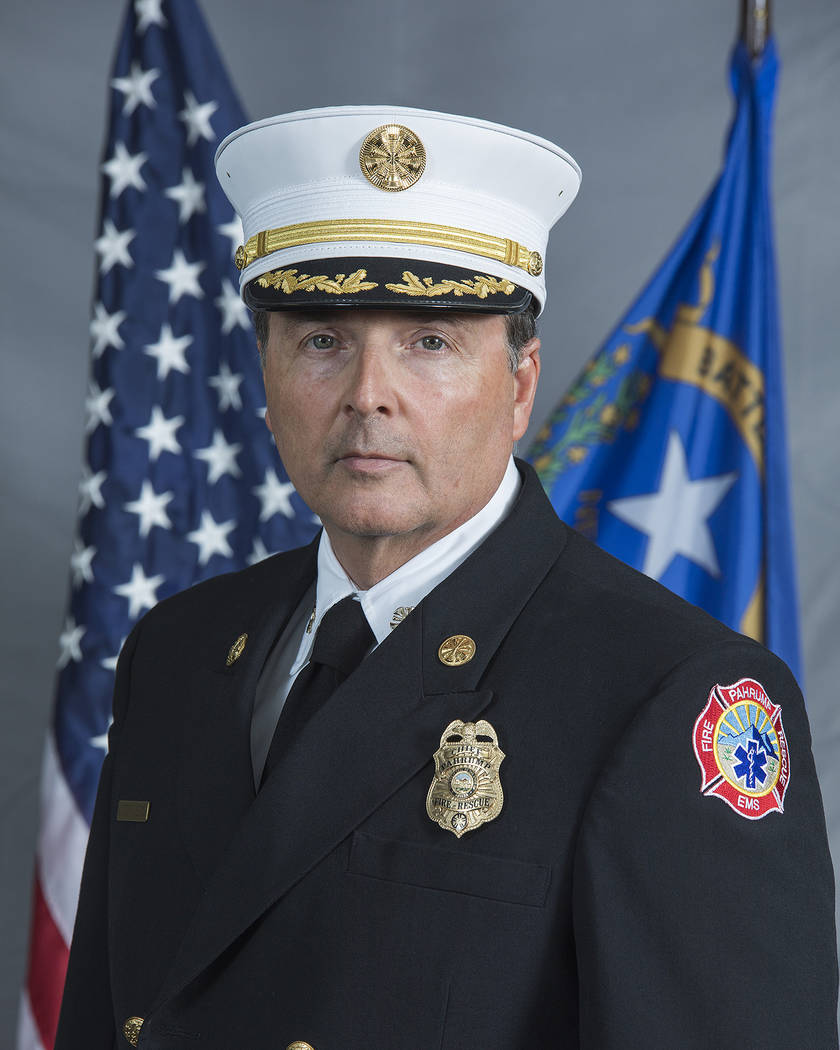 Special to the Pahrump Valley Times Pahrump Valley Fire and Rescue Service Chief Scott Lewis transported himself to Desert View Hospital in Pahrump and was subsequently released after being treated.

Chief Scott Lewis sustained injuries to his hands and face when the floor of the structure collapsed underneath him while battling a blaze in the 1400 block of West Dyer Road just before 8 p.m. on Thursday, Oct. 31.

Lewis transported himself to Desert View Hospital in Pahrump and was subsequently released after being treated.

“Crews arrived to find heavy fire conditions in the middle portion of a double-wide manufactured dwelling, with fire showing from both the front and the rear of the dwelling,” Lewis said.

“Crews quickly determined that all occupants were accounted for and safely out of the area. Crews commenced a defensive exterior attack, due to the fire conditions and the overall condition of the structure. The fire, which was quickly knocked down, was deemed suspect at the time.”

Lewis also said an investigation revealed that the fire was most likely accidental in nature.

The initial investigation revealed that the power to the dwelling was shut off earlier in the day and the occupants were using candles for illumination, Lewis said.

On Friday, Nov. 1, fire crews were dispatched for a reported single-vehicle crash in the area of Manse Road just before 7 p.m.

The original location, Lewis noted, was listed as Homestead Road, however as crews arrived on location, they found the accident located closer to San Souei Lane, which is slightly further west off of Manse Road.

“Crews found a one-vehicle rollover, with one ejection and one self-extricated,” Lewis said. “There was significant rollover mechanism damage to the vehicle. Both patients met flight criteria, however, only one airship was available at the time. That patient was transported to Mercy Air Base 21 and subsequently flown to University Medical Center Trauma in Las Vegas. The second patient was transported to the local hospital and it was my understanding that they were later transported to Trauma as well. The Nye County Sheriff’s Office is investigating.”

On Sunday, Nov. 3, fire crews were dispatched for a report of a vehicle crash along South Highway 160 in the area of Osky Street at approximately 7:30 p.m.

“Crews responding were notified that the vehicle had struck an animal, but they were uncertain what the animal was, possibly a deer, which in itself is out of the ordinary for the valley,” Lewis said. “Crews arrived on location where they found a one-vehicle accident versus a large animal. It was later determined that that animal was an elk.”

Lewis went on to say that the car sustained significant damage from the impact.

“The occupants of the vehicle were not injured, however, it is under investigation as to why the elk was down on the valley floor, because none of us first responders have ever seen an elk in the valley before. After the initial impact, additional drivers who didn’t see the elk in the roadway, ran over it as well.”

On Monday, Nov. 4, fire crews were dispatched for a reported vehicle fire along the 600 block of South Highway 160 at approximately 10 p.m.

“Upon arrival, we found a passenger vehicle parked on the shoulder of Frontage Road,” Lewis said. “The engine compartment was well involved and fire was migrating to the passenger compartment. There were no exposures and crews quickly controlled the fire with no extension. The fire is thought to be accidental in nature, linked to mechanical failure. There were no injuries reported.”

On Tuesday, Nov. 5, fire crews were summoned for a mutual aid assignment on South Highway 160 in Clark County, mile marker 32, for a vehicle fire at approximately 8:26 a.m.

“Crews arrived to find a fully-involved passenger vehicle on the shoulder of the highway,” Lewis said. “Crews quickly controlled the fire with no extension and there were no injuries reported. The Clark County Fire Department is investigating.”

“Whenever we set our clocks back or forward, it’s always a good time for homeowners to replace the batteries on their smoke detectors and also make sure that their preparedness plans are in place and are tested. A family communication plan, prepared in advance, can help loved ones stay in touch in the event of a sudden emergency. You also want to make sure all exterior lights are functioning.”