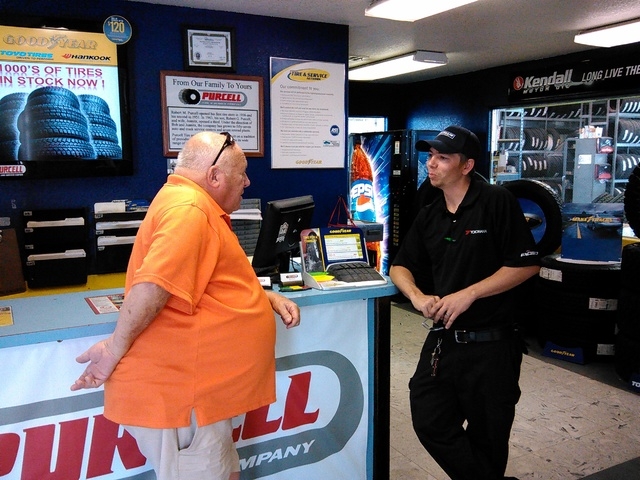 While much attention is focused on the care and safety of humans during the brutal summer heat in southern Nevada, the family vehicle tends to be an afterthought.

High temperatures can take its toll on cars as it can push a vehicle past its limits.

Brett Hollis, manager of Purcell Tire and Service Center, said if drivers don’t perform routine service and maintenance, a mechanical breakdown in the heat can occur.

The main issue during Pahrump summers where temperatures hover over 100 degrees is overheating, as a car’s cooling system takes much abuse from June through August.

Hollis said though engine fluids are essential to keep a vehicle running smoothly, by lubrication, fluids also serve as coolants by helping carry heat away from critical components.

He noted the last thing a driver wants is to have their tires shred while driving at highway speeds.

Driving on underinflated tires not only affects the handling and braking of a vehicle, it also causes the tires to overheat, increasing the likelihood of a blowout.

While checking the tire pressure, including the spare, drivers should also inspect the treads for signs of uneven wear.

“You want to pay attention to the air pressure because they will build 5-to-10 pounds just from driving around in extreme summer heat,” he said. “If it’s 110 degrees outside, your road temperature is going to be about 140 degrees because heat expands and increases the air pressure.”

Though many drivers assume battery problems are associated with winter driving, the summer heat can impact a car’s battery even more than during winter.

“Out here in the desert, extreme heat drags the battery down,” he said. “You can literally have a good battery one week and a dead battery the next week. That’s where normal maintenance comes into play. When you come in here for your oil changes we also check all the fluids and test the battery to make sure everything is good to go.”

Never add cold water to the radiator, as it could damage the engine block and head gaskets.

“If you are broken down on the side of the road the last thing you want to do is add cold water to the radiator,” he said. “It’s very hard on the head gaskets and the block itself. The best thing to do is try to sit and let it cool down.”

Schadt also advised drivers to pay close attention to the condition of the vehicle’s coolant.

“Flushing your radiator cleans any kind of debris or buildup because over time, antifreeze breaks down just like anything else,” he said. The quality of antifreeze does deteriorate. Some are three years and some are five years.”

Hollis, meanwhile, said servicing the vehicle’s air conditioning is another important component drivers should be aware of.

“When a car starts to overheat, your air conditioning will not work as well as it should,” he said. “Not only is your car going to suffer you and your passengers are going to suffer, too. Keeping your cooling system maintained is the number one thing you can do during the summertime.”

The kit should include water, non-perishable food items, jumper cables and a flashlight with extra batteries.