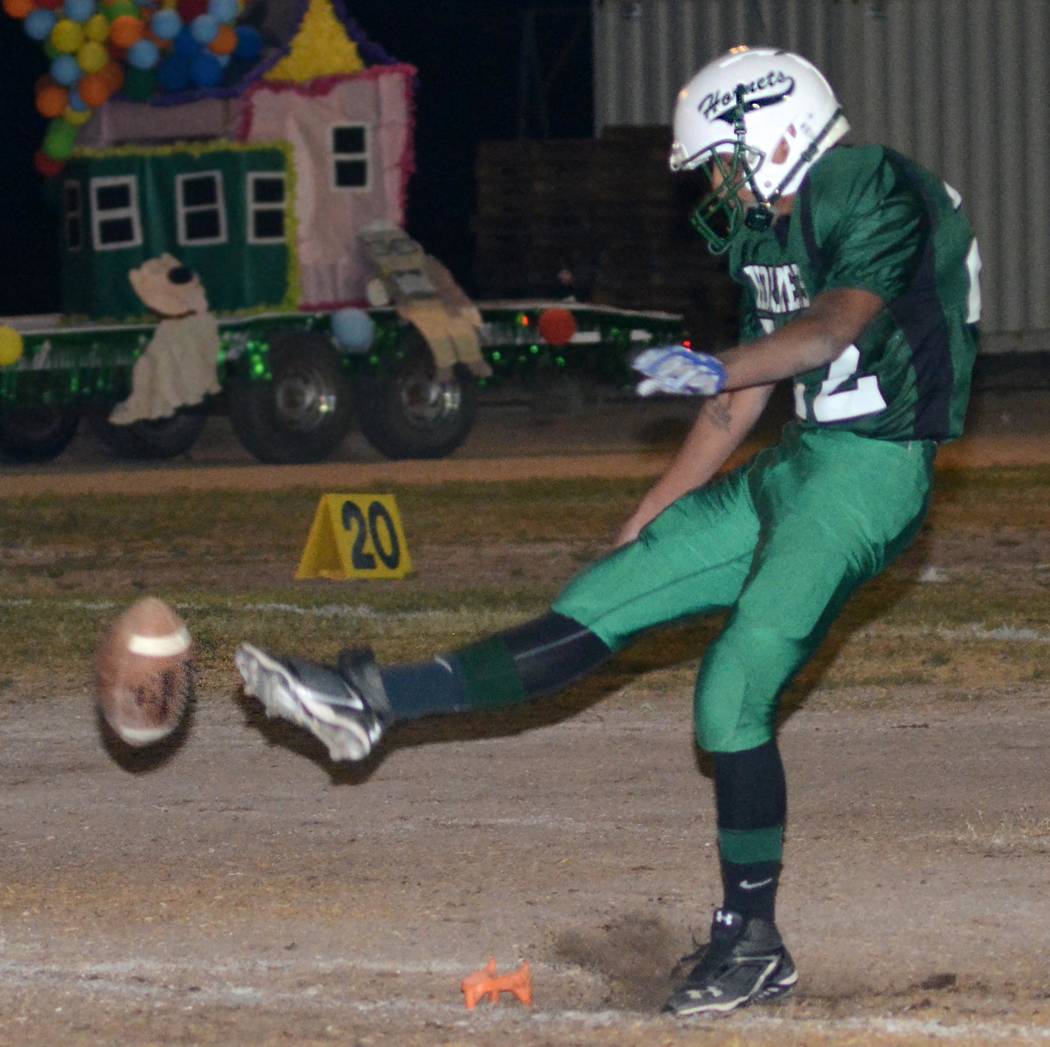 Richard Stephens/Pahrump Valley Times Edrid Bastidas kicks off against Round Mountain during the homecoming game on Oct. 13. The Hornets played their hearts out against Spring Mountain and came within five points of beating them last Friday.

The Beatty High School football team came within five points of the biggest upset of the year as it lost to the defending Class 1A state champions.

Friday started off as the usual Spring Mountain beating up on Beatty scenario, with the Eagles drawing first blood and taking a 16-6 lead at the half. But then in the third quarter, the Hornets held them scoreless.

For Beatty, the fourth quarter was like a new game. The Hornets offense came alive and outscored the Eagles 19-14.

“We just came to the realization too late that we can play against these guys,” head Beatty coach Leo Verzilli said. “The game came down to little mistakes. I think our players know they should have won that game. In the first half, we were stopped on the one-yard line from scoring and that could have won the game for us.”

In the game the Eagles had 147-yards passing and 328 yards on the ground, while the Hornets had 185 yards on the ground and only 42 yards through the air. Although Spring Mountain was able to move the ball, the Beatty defense was able to stop the air game with four interceptions and that was a game changer. Sophomore Fabian Perez had one interception, junior Alan Sandoval had one and Yadir Rodriguez had two.

“Our pass defense has gotten better,” the coach said. “And we just held them a couple of times. Our team just played their hearts out.”

Scoring for the Hornets were running back Perez, with a TD rush, and junior receiver Rodriquez, with two touchdowns, one rushing and one TD reception.

Verzilli said to beat the Panthers his team had to play them like they played any other team.

“Our team has to realize these guys are tough, but they make mistakes,” the coach said. “These guys drop balls and miss tackles like any other team and my guys need to realize that.”

The Hornets this year have no senior leaders and are depending on the junior class for team leadership. He said his juniors have come a long way.

“We have no senior class so our juniors have had to take over the role of leaders a year early and they have done a great job with that responsibility,” Verzilli said. “They as a whole have set the tone for the year by being at practice every day, helping the younger kids as well as each other, staying eligible, setting the tone for acceptable behavior on and off the field.”

“As our QB and running the offense, Fabian Perez knows what all our backs are supposed to do and helps with formations and responsibilities,” Verzilli said. “Junior tight end Max Taylor has become the leader, mostly by example, of our defense, making the calls and getting coverages set. For a young team with not a lot of playing time because of the heavy senior class last year, they have done a great job and I couldn’t be more proud.”