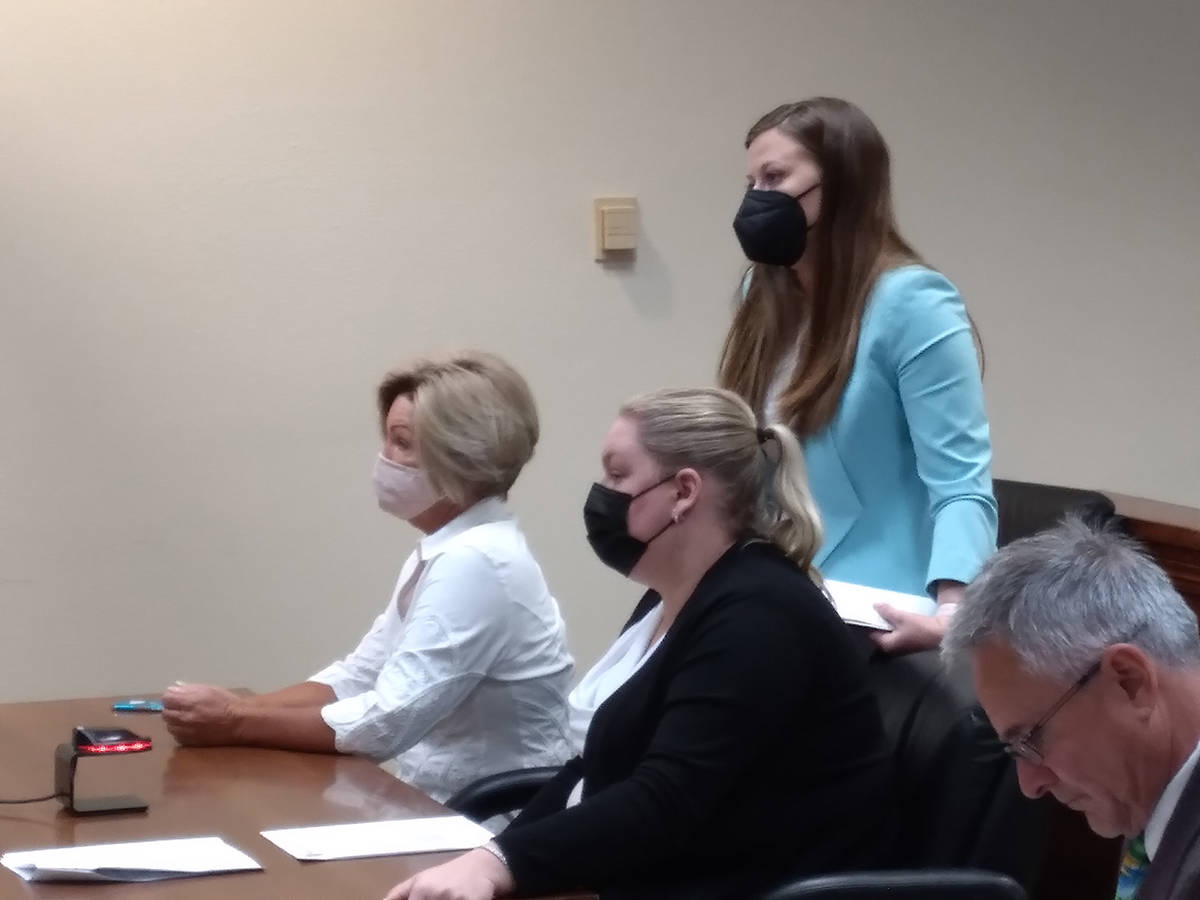 Selwyn Harris/Pahrump Valley Times Melinda Hinrichs, seated front and center, is joined by public defender Ronni Boskovich, standing, during a June 4 arraignment hearing. Hinrichs is accused of stealing more than $100,000 from the Nye County Juvenile Probation Department where she was an employee, according to sheriff's office investigators.

The revelation came during Hinrichs’ arraignment hearing on Friday, June 4.

Wanker noted that the only reason she will not preside over the case is due to the fact that both she and Department 2 Judge Robert Lane work closely with the juvenile probation department.

“He supervises the juvenile department, but I’m familiar with the facts of this case and it would be inappropriate for me to handle this case under the code of judicial conduct,” Wanker explained. “Judge Lane will sit as a witness and I may be as well. Obviously, he can’t hear the case, and as a courtesy to Judge Lane, I’m going to let him know that we both need to send this up to the Senior Judge Program.”

Nye County District Attorney Chris Arabia said the decision to appoint another judge to preside over upcoming court hearings related to the matter, avoids any appearance of a conflict of interest.

“Both Judge Wanker and Lane will recuse themselves because juvenile probation is under the control of those courts,” he said. “It just looks better if we had another judge come in from the outside.”

Another issue addressed during the arraignment hearing was that of the defendant’s defense attorney, as Hinrichs initially retained the services of attorney Daniel Martinez, who now works as a Special Public Defender in Clark County, Arabia noted.

Though Wanker, by way of her recusal, said she cannot hear the facts and details of the case, she wanted to be certain Hinrichs had legal representation.

“Obviously you thought Mr. Martinez was representing you,” Wanker asked Hinrichs. “Do you need time to talk to him? I’m not trying to put you on the spot today.”

In her response, Hinrichs said she wanted to get more clarification from Martinez regarding the issue, while also stating that she would be willing to have Boskovich represent her.

“I did retain him, and he’s been very upfront with me about the fact that he has moved on from the county,” Hinrichs told Wanker. “I would probably have her stepping in. I wasn’t completely aware that he had completely stepped back, so I would like to confirm if that’s the case, and I think it’s easily fixable.”

The criminal complaint asserts that the alleged theft of the monies began in 2014 and continued until September of 2019.

As an administrative assistant, Hinrichs was tasked with handling funds received as payments of fines and fees in the department, but sheriff’s office investigators said she illegally kept the funds for herself.

At the time, Nye County Sheriff’s Office Capt. David Boruchowitz said an investigation into the missing funds was opened on Oct. 18, 2019.

He noted that Hinrichs actually admitted to taking the funds, once confronted.

Boruchowitz also said that Hinrichs was cooperative and provided information about the money she allegedly stole, as well as several attempts to repay the funds.

“Nye County Sheriff’s Office investigators combed through copious amounts of financial records, in an attempt to identify exactly how much money was missing,” he said, “During the course of the investigation, it was determined that it was in excess of $100,000 missing.”

After Hinrichs resigned from Nye County employment, the case was submitted to the Nye County District Attorney’s office for prosecution.

What took so long?

Also at that time, Arabia said part of his investigation will be to seek to answer exactly why the alleged acts were not discovered sooner.

“I don’t know, but I would like to know,” he said. “We take these kinds of charges especially seriously because not only do you have corruption, but also a violation against the public by a person in a position of public trust. I’m not sure exactly how long she was employed with the Nye County Juvenile Probation Office, but she was there for a very long time. I don’t have any comment on how she intended to repay the missing funds.”

When asked why Hinrichs was allowed to resign from her position, rather than being terminated by the county, Arabia replied that he didn’t know, but even if he did, he wouldn’t have any comment.

Arabia did say however, that the citizens of Nye County can rest assured that the district attorney’s office will continue working and will do everything possible to find out how the alleged theft could have been carried out for several years.

“We are investigating how this could have happened for so long as it apparently did, and who could have or should have stopped it sooner,” he said. “I’m not going to comment on what she said she spent the money on.”

Hinrichs is due back in court on June 18.