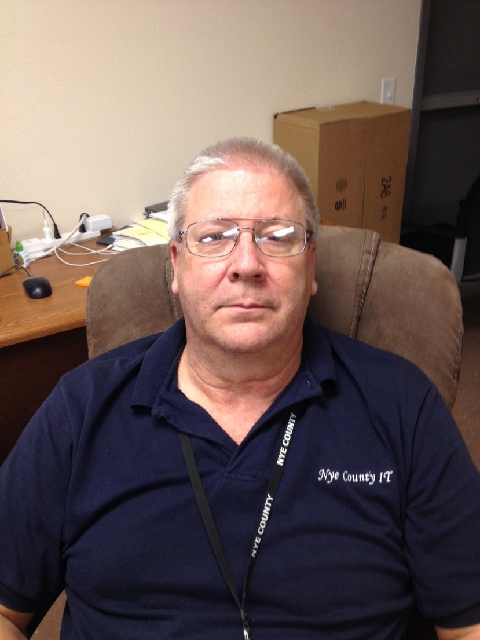 Dimic’s former position of network engineer, will be eliminated, Webster told county commissioners Tuesday. Commissioners approved her selection of the new IT director without discussion.

But Hatfield was eventually given charge of the sheriff’s department radio system. Last October he delivered a scathing report of all the shortcomings of the $6 million system in a report to county commissioners.

Dimic said he already met with the sheriff’s department, emergency services department and public works to come up with a solution everybody is comfortable with on the radio system. He expects to present it to county commissioners next month.

Hatfield proposed a contract to county commissioners, but was turned down in December, this came after county supervisors lost some leverage under the Nye County Management Employee Association.

Hatfield had served notice of his intent to return to Ohio where his wife still lived, but offered to stay in Nye County if the employment agreement was approved.

Dimic was the county IT director from 2007 to 2009 and was network engineer for the past year. He brings over 35 years of management and technical background to the position, according to Webster’s request.

Between 2010 and 2012, between his two stints for Nye County, Dimic states in his resume he was a sales technician for JLD Inc. in Rochester, Ind.

As county IT director, Dimic said he designed and implemented a comprehensive disaster recovery plan and a web accessible Geographic Information System.

His normal duties as IT director include ordering, installing and maintaining all hardware, software, infrastructure and networking systems, working with an operating budget of approximately $1 million.

His resume states Dimic also worked as a systems engineer III for Winn Dixie supermarkets in Jacksonville, Fla. from 2002 to 2007; a systems infrastructure manager for Arthur Andersen in Chicago from 1994 to 2002; a senior systems programmer for the Illinois Board of Governors from 1992 to 1994 and for First Options of Chicago from 1988 to 1993; and as technical support specialist for Kemper Financial Services in Chicago from 1981 to 1988.

• Commissioners approved a one year contract up to $25,000 with Fred Jones to provide technical support for multiple communications and short wave radio issues in the emergency services department. Jones has been the communications officer for Nye County for over six years.

Jones will work on changes to the trunking system, ongoing issues with pagers, radio operation issues and issues with communication and self-contained breathing apparatus.

His responsibilities include maintaining and installing radios and antennas in the new emergency management command post and emergency management facility; developing a regular maintenance and inspection program; working with other communications staff to ensure repeaters are maintained and inspected on a regular basis; making sure radios are programmed correctly; conducting training classes on the use of equipment and carrying out a priority project schedule based on initial inspections and inventory.