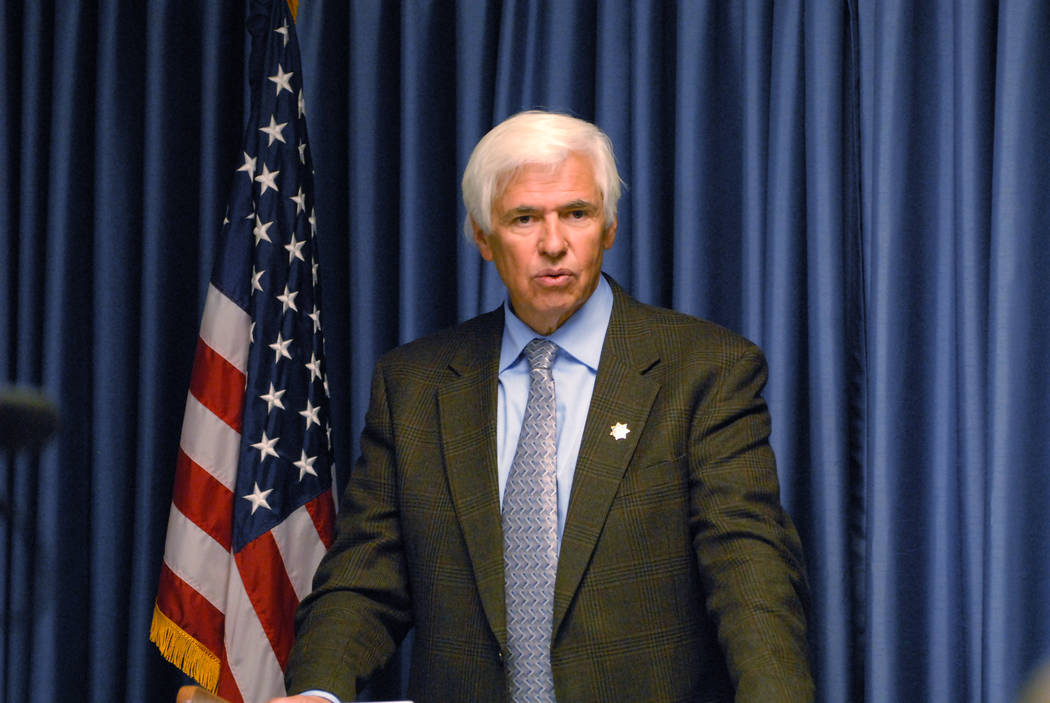 Special to the Pahrump Valley Times Tony DeMeo is shown in an undated photo. He died Tuesday at age 67. He served three terms as Nye County sheriff. 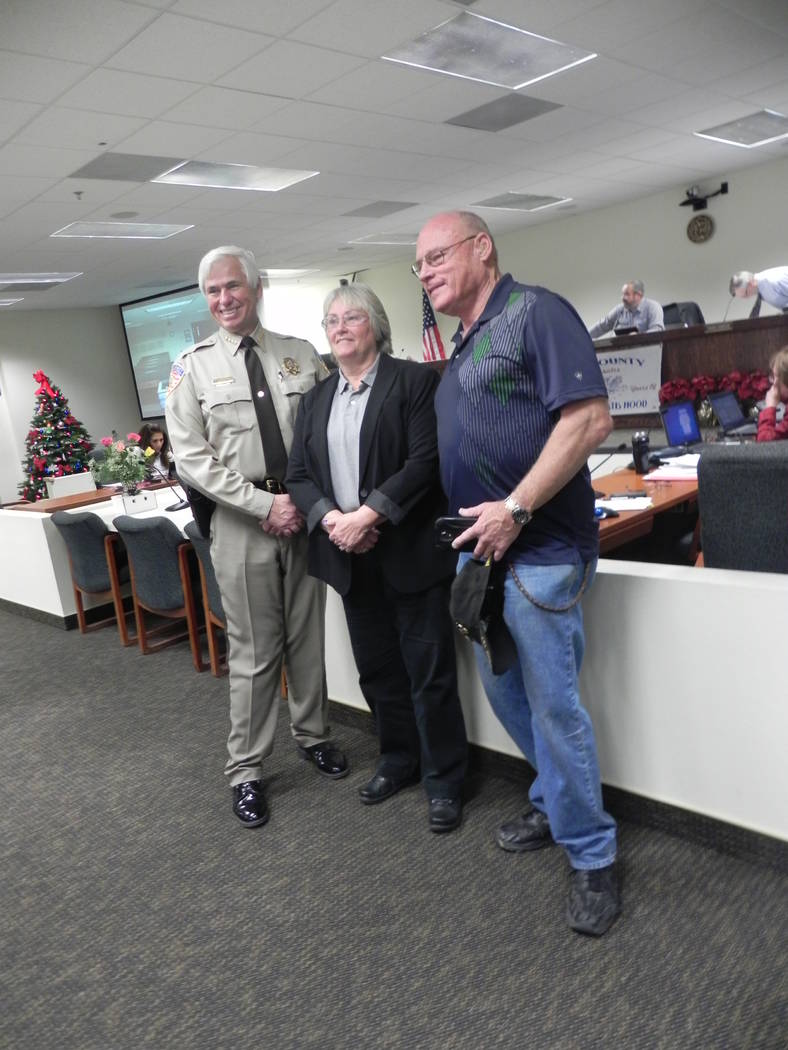 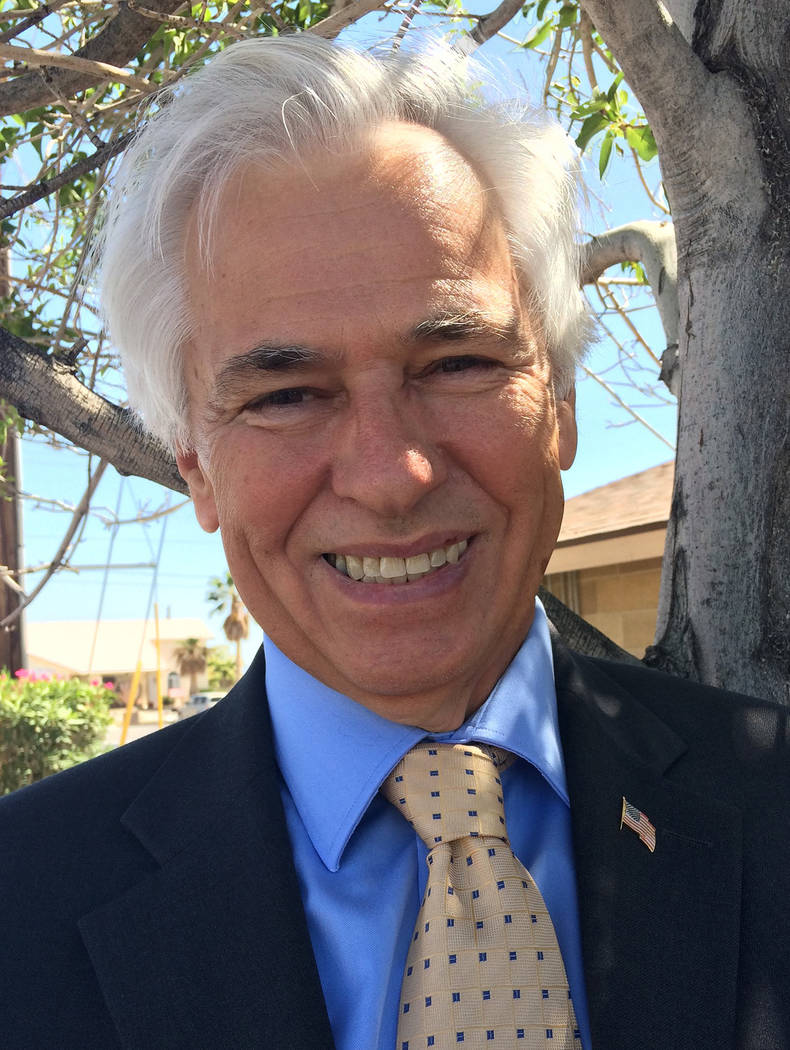 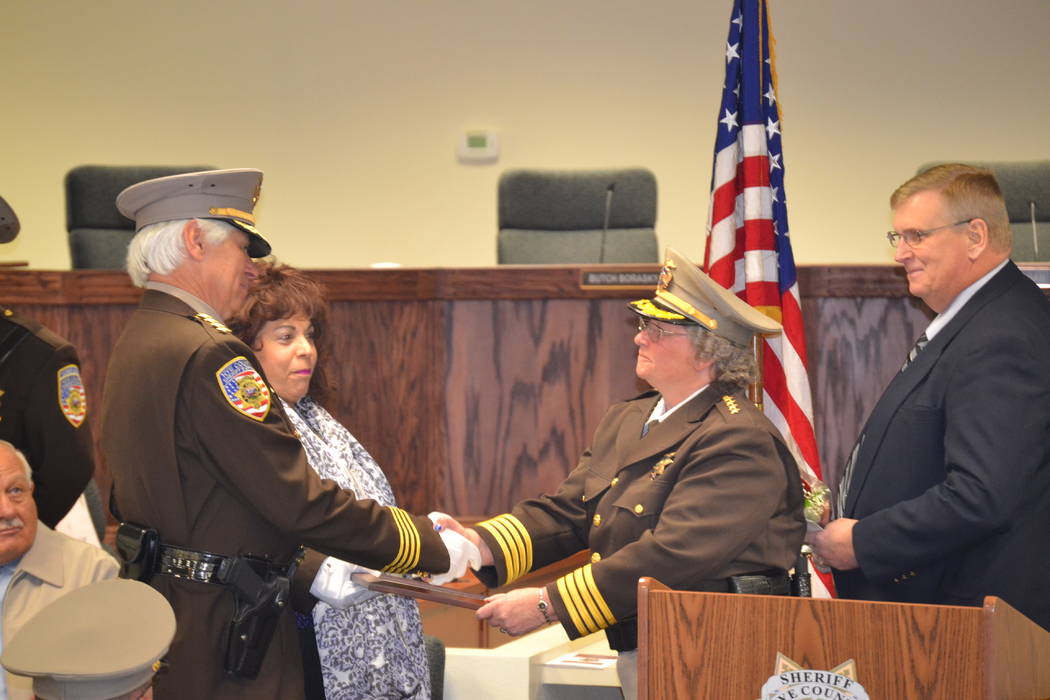 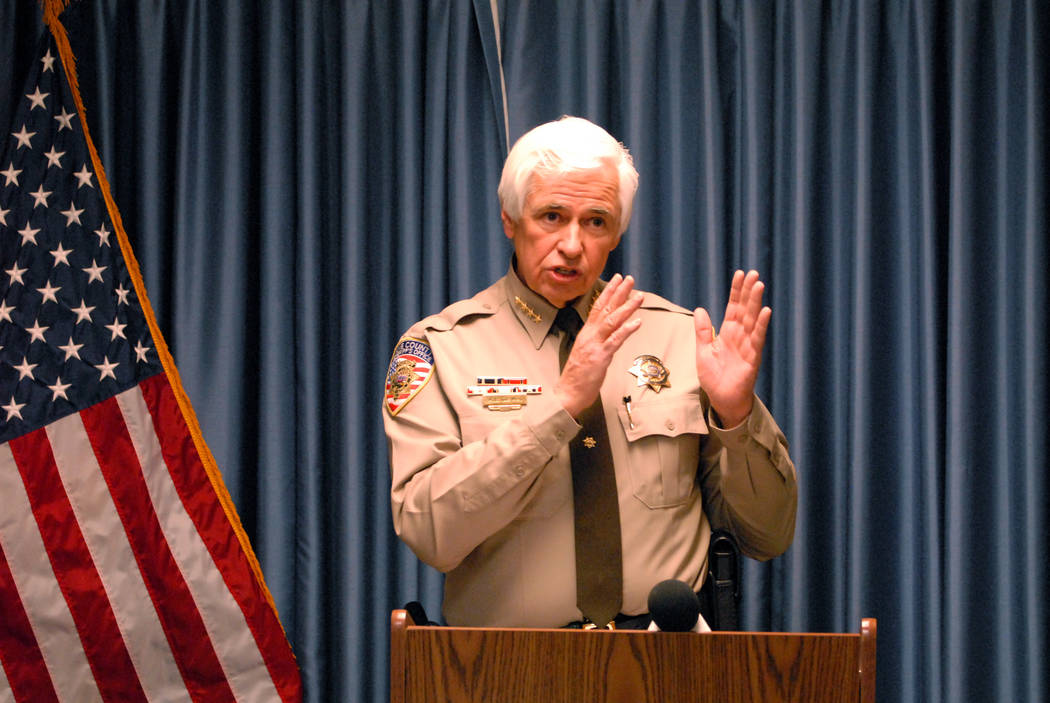 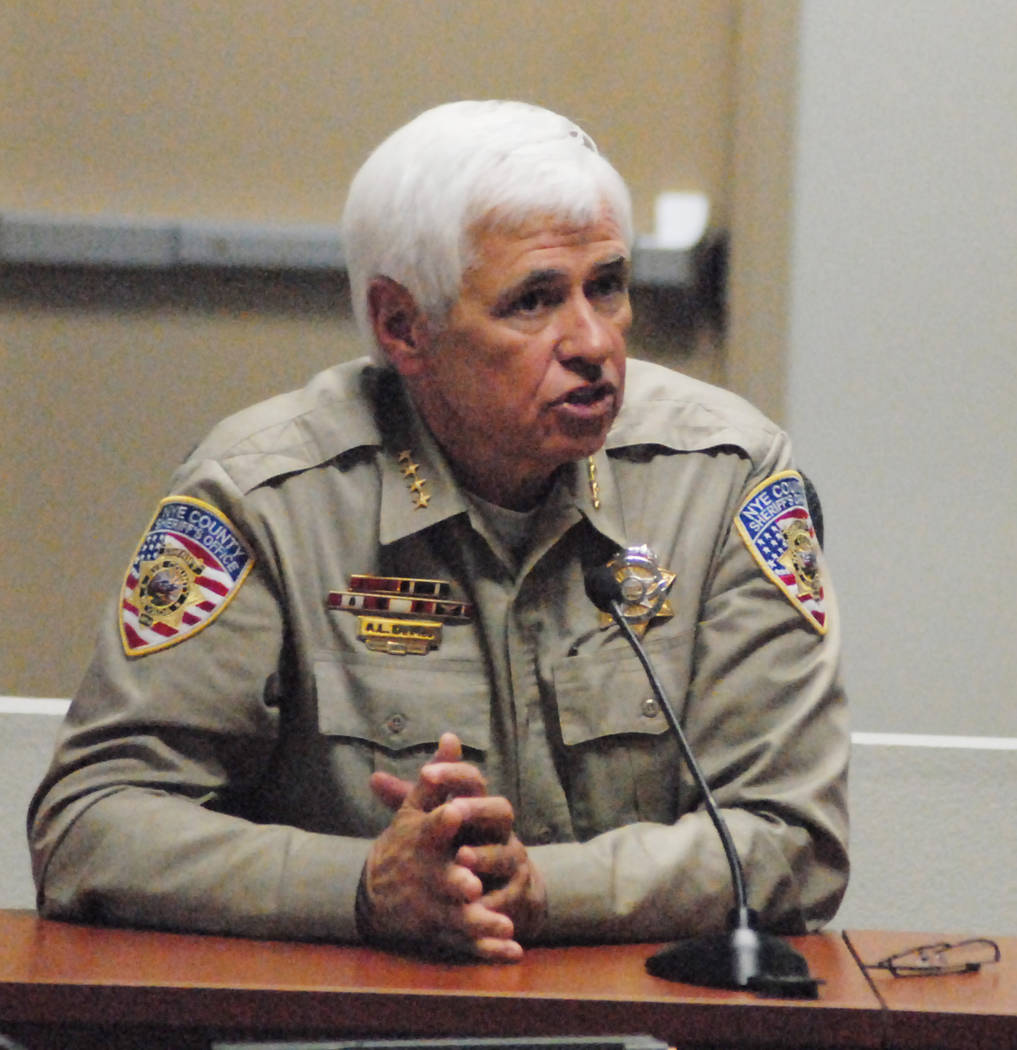 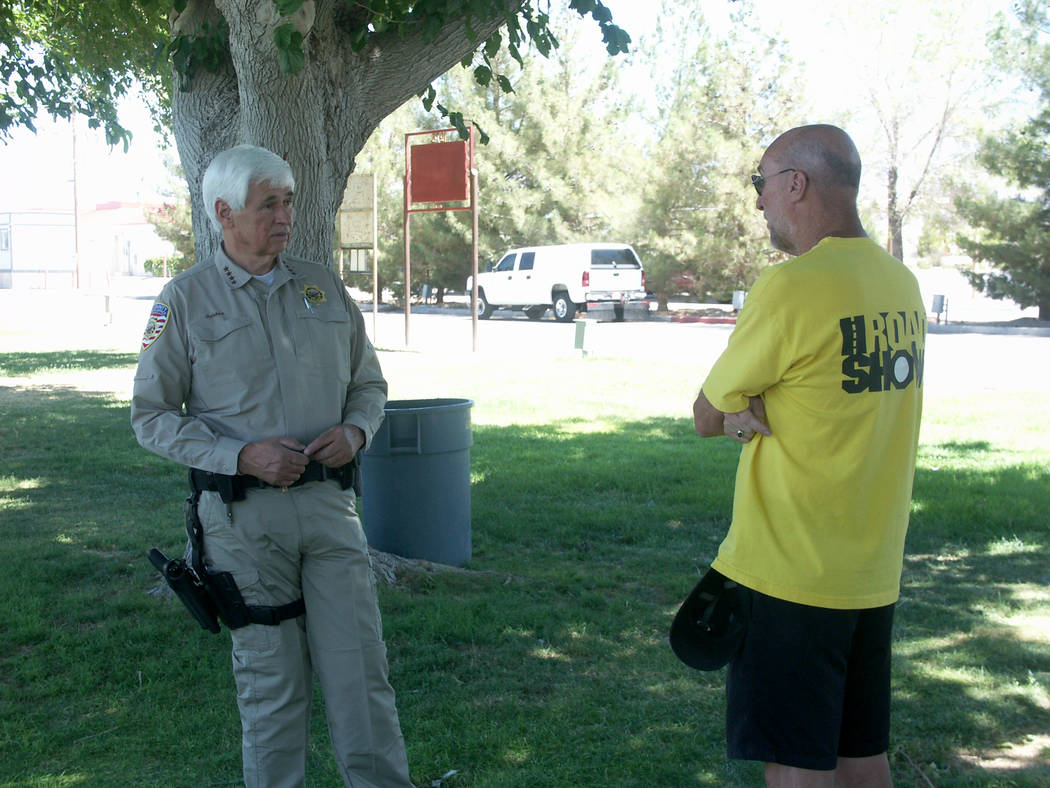 Selwyn Harris/Pahrump Valley Times In this 2014 photo, Nye County Sheriff Tony DeMeo (left) is shown at Petrack Park in Pahrump. He had served the Nye County community in the capacity of sheriff for 12 years.

Former Nye County Sheriff and well-known local figure Tony DeMeo passed away on Tuesday, July 9 at the age of 67.

An obviously emotional Linda DeMeo, Tony’s longtime wife, was still reeling from the news the following day but she did provide brief comment for the Pahrump Valley Times. Linda remarked that her husband’s death came as an enormous shock and was totally unexpected.

“I’m still trying to put together the details, but we believe he hit his head,” Linda explained.

Although she did not have any solid information on the cause for his passing, Linda confirmed that, contrary to certain reports and rumors, Tony’s death was not related to health issues of any kind.

With Tony being such a well-known member of the community, many will wish to pay their last respects to the former sheriff when funeral services are held. However, details on when and where those services will be conducted have not yet been determined, with Linda noting that it would require coordination and extensive planning.

“We’re working out details right now for services for Tony,” Linda stated. “We have a lot of out-of-town family, I am working with my sister-in-law to figure out what we’re going to do. It won’t be soon because we have to work it out with our family back east.”

Linda said she was hoping to hold the service in Pahrump but that was up in the air too, as she is unsure how many people will wish to be there and space availability could affect where the services are held. She offered to provide information on the services once the specifics have been worked out.

As for how she is coping, Linda said she is, quite understandably, having a difficult time but she assured that she is not dealing with the tragedy alone.

“I am the most blessed woman on earth. I have a support system bar none,” Linda said. “It’s not going to be easy but we’ll take it one day at a time. Many, many people have gone through this and I have a tremendous support system.”

Tony had served the Nye County community in the capacity of sheriff for 12 years, from 2002 until stepping down in 2015 after making the decision not to seek re-election in the 2014 race. Following taking a three-year hiatus from the sheriff’s office, Tony then decided to throw his hat in the ring once again in the 2018 election when he ran against and lost to current Nye County Sheriff Sharon Wehrly.

Wehrly and her office expressed their deep sympathy for Tony’s family, including his wife Linda, who must now deal with the terrible aftermath of the death of her husband.

In a post on the Nye County Sheriff’s Office Facebook page, Wehrly wrote, “… my thoughts, sympathy and prayers and those of the entire sheriff’s staff are with Mrs. DeMeo and family. Our badges have been shrouded in his honor and we offer Mrs. DeMeo and his family the honor, gratitude, respect and assistance during these trying days ahead. His service to Nye County and its citizens will always be remembered. Sheriff Wehrly and staff.”