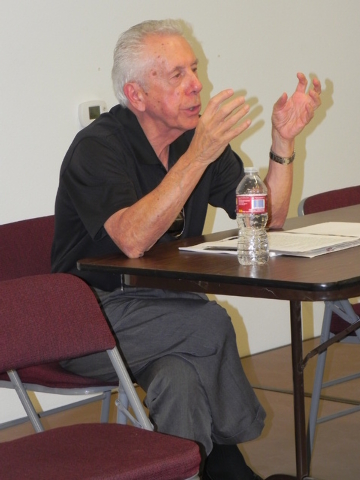 A B-50 fighter plane took off on Jan. 7, 1951 from Kirkland Air Force Base in New Mexico, refueled at the Indian Springs Air Force Base and dropped a nuclear bomb code named Able, with a yield of 1,000 tons 1,060 feet over Area Five of the Nevada Test Site, the first nuclear weapons test, marking the entry of Nevada into the Cold War.

Test site historian Nick Aquilina credited the Joint Verification Experiment, in which scientists from both the U.S. and Soviet Union visited each other’s facilities in 1988, with the end of the Cold War.

The decision of the Soviet Union to develop a thermonuclear bomb, the need to explore fusion and the start of the Korean War all revived interest in creating a test site for nuclear weapons on the U.S. continent, Aquilina told attendees gathered for National Nuclear Science Week at the Pahrump Valley Museum Wednesday night.

Aquilina began work at the test site, now known as the Nevada National Security Site, in 1962 and transferred to the Atomic Energy Commission in 1967. He was appointed manager of the DOE Nevada Operations Office from 1987 to 1994.

A multi-year study named Project Nutmeg examined a number of alternate sites for nuclear weapons testing like White Sands Missile Range in New Mexico and the Dugway Proving Grounds in Utah which were rejected.

President Truman signed off on the Project Nutmeg study Dec. 18, 1951 and a portion of the Nellis Bombing and Gunnery Range was selected.

After the Able test, four additional air drops were conducted over the next 10 days, ending with the Fox event, which had a yield of 22 kilotons and the nuclear race with the Soviet Union was on, he said.

President Eisenhower entered into a unilateral testing moratorium with the Soviet Union in October 1958 but the Soviets abrogated the agreement in September 1961 with a series of the largest tests ever conducted Aquilina said. The U.S. resumed testing on a year-round basis.

In 1974, the U.S. and the Soviet Union entered into the Threshold Test Ban Treaty which restricted all nuclear test explosions to yields no greater than 150 kilotons after April 1, 1976.

Aquilina recalled the Joint Verification Experiment. American scientists were dispatched to visit Soviet facilities at Semipalatinsk in Kazakhstan for eight months. He was startled to see Soviet scientists walking through the cafeteria at the Nevada Test Site.

“For the first time scientists and engineers of both countries came together. Can you imagine having 40 of the top scientists from the Soviet Union, many of whom had never been out of the Soviet Union, come to the test site and deal with our scientists from Los Alamos, Livermore, Sandia and the DOD and our people out here? Friendships developed, cross talk developed and many of us think it contributed significantly to the end of the Cold War,” Aquilina said. “I really believe this contributed significantly to that Cold War ending.”

“I just want to mention the great contributions to this incredible and important history that citizens of southern Nevada, and especially towns like Pahrump and Beatty made to its success. I wish there was more people from the town here that we could just say thank you,” he said.

The U.S. conducted 928 nuclear tests at the Nevada Test Site, 100 were atmospheric and another 828 were conducted underground, following the passage of the Limited Test Ban Treaty in 1963 which banned atmospheric tests, Aquilina said.

The Soviet Union conducted 715 nuclear tests, China did 42 of what he called “dirty tests” that contaminated the air, France did 210 nuclear tests with many in the South Pacific, India conducted six tests and Pakistan two, which frightens him more than any other country.

Asked whether there would be full scale resumption of nuclear testing, Aquilina said, “we had North Korea do two kinds of tests, at least two that we kind of know about, not sure how successful they were but they did have a nuclear explosion of some type. Yes, I am sure that our friends in Iran would like to do that, Pakistan, which are the ones I worry about, because we know they have weapons and we know they did two tests.”