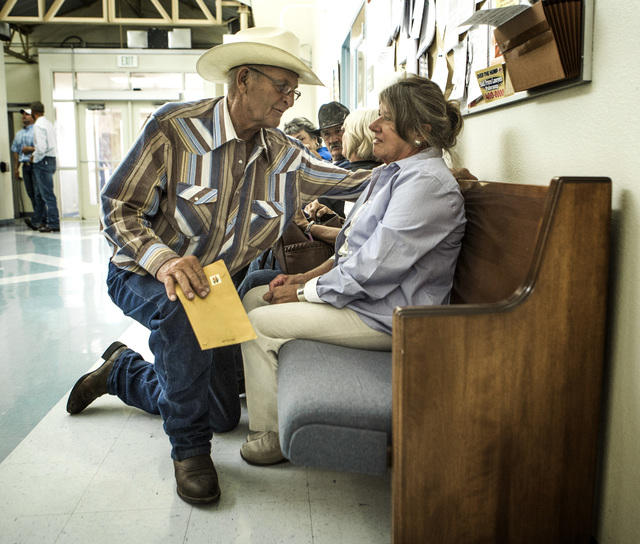 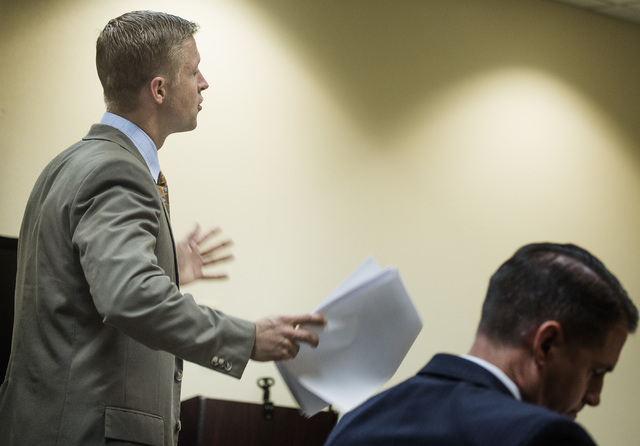 Everybody agrees Nye County rancher Sue Fallini did nothing illegal — including the judge presiding over her case.

But depending on the judge’s decision this week, Fallini could be forced to pay more than $1 million in a civil judgment that could end her family’s nearly 150-year ranching history in Nevada.

“It’s frustrating for me … I’m presiding over what you call an injustice. And it is an injustice,” Judge Robert Lane said Monday during a hearing in Nye County District Court. “There’s got to be a way to remedy this.”

About 60 friends, family members and concerned Nevada ranchers went to Pahrump on Monday to witness the latest development in Fallini’s seven-year legal battle.

“They’re the best neighbors in the country,” said rancher Ray Kretschmer, 76. “I’ve known the family 40 years. This is just wrong.”

Fallini was sued in 2007 by the family of California mining geologist Michael Adams, who died in 2005 after his car struck one of the rancher’s cows on state Route 375.

The Fallini’s Twin Springs Ranch is open range, and Nevada law protects open-range ranchers from being sued if their cows are struck by cars.

Adams was also drunk and speeding when he struck the cow, according to police reports, but that didn’t stop his mother from filing a lawsuit against Fallini.

The lawsuit would have been thrown out, except Fallini’s lawyer, Harry Kuehn, didn’t bother to respond to court motions filed by the plaintiff’s lawyer, John Aldrich.

In a grave misstep, Kuehn ignored a motion filed by Aldrich asking Fallini to admit her ranch wasn’t open range, which was a false statement.

When Kuehn failed to respond for about nine months — even after being sanctioned several times by Judge Lane — the motion was granted, despite it being untrue.

Because of the “admission,” and Kuehn’s other failings, in 2009 Lane awarded Adams’ mother a summary judgment of $2.7 million. The amount was later reduced by the Nevada Supreme Court to about $1 million.

The ruling rocked the Fallini family, which has 1,800 cows on 663,000 acres of land, an area three times greater than Red Rock Canyon National Conservation Area. The family has owned the ranch since the 1860s.

Fallini said she never knew her lawyer was shirking his duties. She said Kuehn told her the “case was over” in 2007, and she took him at his word.

“She didn’t know he would leave her high and dry,” said Fallini’s new lawyer, David Hague, in court on Monday. “If anyone can tell me one thing Ms. Fallini did wrong in this case, I’d love to hear it.”

“She relied on Mr. Kuehn,” the judge replied.

Kuehn lost his contract with Nye County earlier this year after refusing to buy malpractice insurance, and the Nevada Bar Association recommended that his law license be suspended for five years. The Nevada Supreme Court is hearing Kuehn’s appeal on his suspension.

Fallini’s first lawyer might have failed her, but her new lawyer is fighting for one more chance.

On Monday, Lane heard from Hague — a Texas law professor who flew to Nevada to defend the rancher — who argued that the plaintiff’s lawyer, Aldrich, committed fraud by accepting the false admission from Fallini.

Hague, in a blistering 30-minute attack, said Aldrich knew about the open range law. Aldrich took advantage of Fallini’s incompetent defense, Hague said in court, and deceived the judge to win the lawsuit.

“I have never seen a case with a 100 percent defense as a matter of law, and somehow loses,” Hague said. “She should not be punished because of the opposition attorney’s lies. She did nothing wrong … It needs to be corrected.”

He would have never deceived anyone, he told Lane, and followed protocol as a lawyer.

Aldrich said he never knew Fallini’s ranch was open range, and even if he had known, he wasn’t responsible for aiding Kuehn’s case.

“I did not push this (lawsuit) through in a hurry trying to pull the wool over everyone’s eyes,” Aldrich said. “What about my duty to my client? … I stand here in clear conscience.”

Lane was visibly troubled after the nearly two-hour hearing. Fallini likely should have won the lawsuit, he said, but the case followed protocol and the judgment is unlikely to be thrown out by a higher court.

“That’s the problem. All this time I have been following the law,” he said.

His decision, expected in a few days, will likely be appealed to the Nevada Supreme Court no matter his ruling, he said.

Fallini sat quietly throughout the hearing but fumed after court. She blamed Aldrich for defrauding her and using a lie to win his case.

“He’s a sleaze. He’s a snake. He’s a liar, and he knows it,” she said, echoing comments made by her lawyer in court. “He knows it was open range. And he lied anyway.”