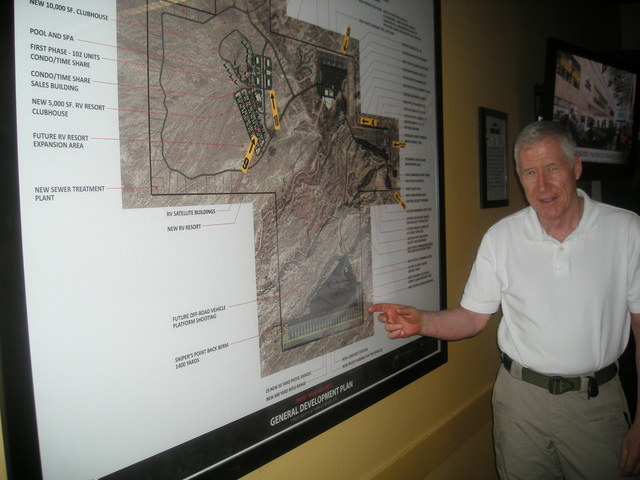 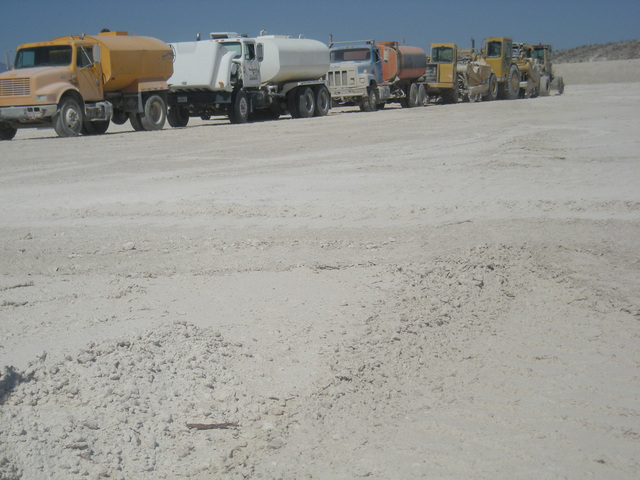 About 32,000 students took classes at Front Sight Firearms Training Institute in the last year, according to Vice-President and Chief Operating Officer Mike Meacher. The number almost equals the entire population of Pahrump.

To meet the growing demand, crews for Morales Construction have been busy grading an additional 26 shooting ranges, adding to the existing 24 ranges, more than doubling the capacity. Meacher expects work to be completed by the end of the year.

Meacher said each range has a capacity of 40 people, when the phase III shooting ranges are completed, and there are a total of 50 ranges. Front Sight will be able to accommodate 2,000 students at one time. He said that will move the training facility more toward their goal of a country club-type resort community for shooters.

Meacher estimates construction crews will move about 200,000 cubic yards of dirt over the 60-acre spread for the additional 26 shooting ranges, before drilling another well in that area. Front Sight officials have taken advantage of the eroded areas, with a sniper’s nest overlooking canyons where an expert marksman could practice shooting at targets 1,400 to 1,500 yards away. The canyons bear names like M-16 Canyon or Shotgun Canyon, even a Jurassic Canyon, with targets of elk, deer and moose.

“It’s more of the same except we’ll have longer ranges. The longest we have now is 400 yards. This one will have a dedicated range of 800 yards and on that 800-yard range it will have long-range precision shooting positions out to about 1,500 yards. Then we will have more of the shooting simulator facilities, which are sort of artificial housing, shoot-house deals,” Meacher said.

When asked if students had to be turned away because all the ranges were full, Meacher said, “we’ve never cancelled a class. We’ve never turned anybody away and that’s been since ‘96. You come out here and it’s pouring rain or 50-mph wind or 105 degrees, the classes go on, and I mean heck, I was out here a couple of years ago in January when we had six inches of snow. We had a rifle class going on. These people were laying in the snow, shooting.”

After the next group of shooting ranges, they’ll build infrastructure.

“We have a new infrastructure contractor. We’ll do the water, sewer, electrical distribution throughout the entire property. When we get that completed, then we start the physical ground-up stuff,” he said.

A second classroom building planned in the future will be 85,000 square feet, about the size of a Walmart, Meacher said. Artist’s conceptions on a visual at the Front Sight classroom show a large parking lot in front, fountain courtyards and the names of Front Sight members on plaques along an entrance wall. It will be able to house 1,000 students for classroom training at one time, in four classrooms of 250 people.

Front Sight already has a development agreement approved by Nye County, valid until 2024, to build 40 single-family residences, 2,066 time-share condominiums, a 279-space recreational park, a hotel, clubhouse and other commercial uses, such as sit-down restaurants, gas pumps, a convenience store and package store. That development, part of what Front Sight founder Ignatius Piazza envisioned in the late 1990s, for a shooters’ country club community, will be on the west side of the 550-acre spread.

“Those people bought 88,000 room nights someplace, because the classes are two, three, sometimes four days. That’s a big number. You tell me, how many 34,000 communities have two world class facilities like Spring Mountain and Front Sight? Darn near none,” he said.

But unlike Spring Mountain Motor Sports Ranch, another major Pahrump recreational amenity, improvements at Front Sight are gradually being built on a cash-flow basis, Meacher said. He estimated the homes, RV spaces and hotel could go up in two years.

“We surveyed the members and what they want. We’ve got people that are college students to Forbes 400 guys. The economic spectrum is quite broad but what we find is there’s very few, like 40 or 50, who actually want a residence, what they want is an upscale place to stay for the week or two that they’re out here,” Meacher said. “For the most part, most of our people just want a hotel or a condo or an RV bed because most of them are not staying here for months at a time.”