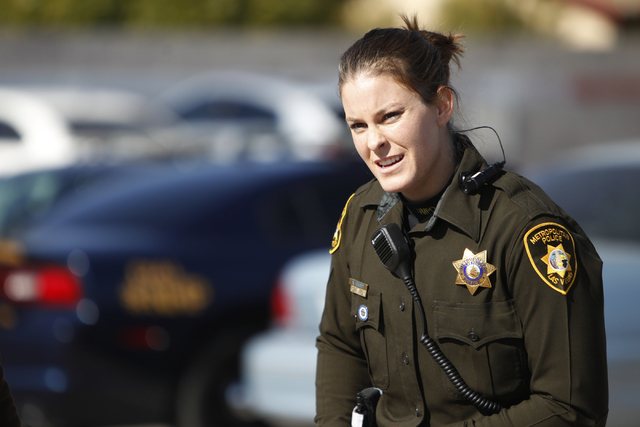 Metropolitan Police Department officer Nicole Hemsey wears a body camera in this 2014 file photo. A state Senate bill would require such cameras for all peace officers who interact regularly with the public. Erik Verduzco/Special to the Pahrump Valley Times

Funding issues took center stage during a hearing on a bill that would require police throughout Nevada to use body-worn camera systems.

Senate Bill 176 would require all peace officers who regularly interact with the public to be outfitted with bodycams by July 1, 2018. The requirement comes with some hefty price tags, according to fiscal impact statements submitted by several jurisdictions to the Senate Government Affairs Committee.

In August, Nye County Sheriff Sharon Wehrly said the department was negotiating funds for the purchase with the county officials for 70 patrol officers. One estimate had the cameras costing $399 to $599 per unit.

Most jurisdictions said fiscal impacts from the bodycam bill would largely be covered under a funding mechanism that would allow each county to raise its 911 surcharge.

Senate Majority Leader Aaron Ford, D-Las Vegas, testified that he worked with stakeholders to identify a funding source and bring the bill back this session. High costs stymied a similar effort in 2015.

“It’s time to expand this important tool throughout our state,” he said.

A 911 surcharge designed to fund upgrades to emergency dispatch systems could be increased from $0.25 to $1 per month for each phone line and cellphone number. Currently, every county except Clark is authorized to use a 911 surcharge.

Some on the committee worried the surcharge would not be enough to fund bodycam programs in rural counties. The Nevada Telecommunications Association and T-Mobile opposed the use of the surcharge.

The committee took no immediate action on the bill.

Proponents of a bill to change forensics tests for drivers suspected of being high on marijuana told the Nevada Assembly Judiciary Committee on Friday that the proposed law is more scientifically accurate.

Assembly Bill 135 would eliminate urine tests for marijuana and change the marijuana metabolite that forensic technicians look for in blood samples.

Nevada law defines marijuana impairment for drivers as a person who has a certain amount of “marijuana” and “marijuana metabolite” in their urine or blood.

But the metabolite that most of the state’s forensics labs look for, Carboxy THC, does not have a psychoactive effect and has been shown to stay in the body for extended periods of time, Lambert said.

Proponents of the measure argued that police labs should test for the marijuana compounds that do affect the brain, Delta-9 THC and the metabolite 11-Hydroxy THC. Urine tests for marijuana would be eliminated because these psychoactive compounds are not present enough in urine.

A provision that instructed police labs to test saliva as well was met with resistance by state law enforcement agencies. The Washoe County Sheriff’s Office reported that it would cost the agency more than $1 million to set up saliva testing.

An amendment discussed Friday removed the saliva provision, and police dropped their opposition.

Several medical marijuana patient advocates opposed the measure, saying that the bill does not go far enough. They said statutory thresholds for marijuana impairment — measured in the blood as 2 ng/mL of marijuana or 5 ng/mL of metabolite — also need to be changed because marijuana patients could meet those thresholds long after use.

Bill could streamline parole process for inmates with multiple convictions

Nevada convicts waiting for a parole hearing may have another tool for getting before the board.

Senate Bill 184, heard by the Senate Judiciary Committee on Monday, would allow an offender to have the corrections system calculate the minimum sentences for multiple offenses to determine when they are eligible for a parole hearing.

The calculation practice, also called aggregation of sentences, would be allowed for someone convicted in multiple court cases. The committee took no immediate action.

The bill clarifies language from existing law that allows prison sentences for multiple offenses in the same case to be aggregated, or combined, for parole eligibility purposes. In the past, legal questions have surfaced about whether sentences from different court cases and jurisdiction can be aggregated, and the practice has not been allowed. — Ben Botkin, Las Vegas Review-Journal

Nevada high school students would start creating a post-high school “road map” as early as ninth grade, under a program proposed to the Assembly education committee.

As part of an annually required meeting with school counselors, students would be offered the option to create a road map, according to Assembly Bill 117.

The student would identify their college or career goal and the counselor would help lay out the steps to get there.

“We, in my opinion, sometimes don’t always address on an individual basis the objectives or goals of a student. We tend to have a blanket approach and a blanket statement that we feed to our students on how to graduate,” Assemblyman Edgar Flores, D-Las Vegas, said when introducing the bill.

Each year, the counselor would make sure the student is on track with their goals, and help the student change course if needed.

The committee took no action on the bill. — Meghin Delaney, Las Vegas Review-Journal