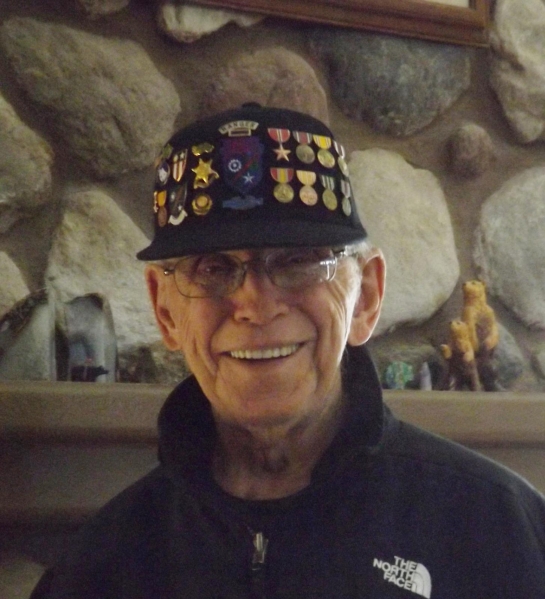 “There is a vacancy on earth that no one else can ever fill. He is now and always will be my hero. Marty is the soul of my soul choosing.”

Those preceding words are from Beverly Martin, wife of Bernard “Marty” Martin, who passed away July 31 at their Pahrump home from complications of heart surgery.

The word “Hero” was a fitting description of her husband, she said, especially when considering what Marty and nearly 3,000 other American troops endured during World War II.

The men answered the call of President Franklin D. Roosevelt for a secret, “dangerous and hazardous mission” on Halloween Day 1943 in Bombay, India.

The troops were an unnamed provisional unit of the U.S. Army Volunteers.

Prior to their deployment, commanders expected more than an 85 percent casualty rate among the troops, nicknamed “Merrill’s Marauders,” after Commander Frank D. Merrill.

“They were the first American ground troops to fight the Japanese in Asia,” said Beverly, who married Bernard at the Little Church of the West on April 7, 1962 in Las Vegas.”With only what they could carry on their backs or pack mules, Merrill’s Marauders walked farther, almost 1000 miles, than any other WWII fighting force, trudging behind enemy lines, up the foothills of the Himalayas and into the densest jungles of northern Burma to capture the only all-weather airstrip on May 17, 1944 at Myitkyina.”

The victory, Beverly said, was a crushing defeat of Japan’s control of the sky, which enabled the Allied forces to begin flying supplies into Burma so the roads could be connected and a crucial pathway opened up into China.

“Marty was a high-speed code combat communications expert and machine gunner,” Beverly said. “Hacking through jungles during monsoon season where the average annual rainfall in Burma is 150-to-250 inches. They experienced every kind of bad condition while cut off from ammo, food, water and everything else, while walking and hacking for almost a thousand miles.”

Virus and disease was another enemy the troops were fighting.

Beverly said her husband, like many others, found themselves in dire straits, due to the conditions they were enduring.

“He had Scrub Typhus, also known as Rickettsia, for which at the time had no cure,” she said. They all had a low survival rate and 106 degree temperature, Marty was airlifted out with a toe tag.”

Their valor was not lost in the “Fog of War,” as Merrill’s Marauders were recognized by the Department of Defense for their courage and bravery, under at many times, unbearable fighting conditions.

“Merrill’s Marauders brought the fight so hard and so aggressively to the Japanese in Burma that every man was awarded the Bronze Star for heroism during the campaign,” Beverly said. “The unit also received the extremely rare honor of being awarded the Distinguished Presidential Unit Citation. There were six Distinguished Service Crosses, for legions of merit and 44 Silver Star medals awarded.”

The Marauders, Beverly said, are the direct forefathers of the modern 75th Ranger Regiment.

“Merrill’s Marauders are still honored today by members of the 75th Ranger Regiment, who wore the Marauder patch as their crest,” she said. “Marty was the last of the Orange Combat Team.”

The short-lived Merrill’s Marauders disbanded on Aug. 10, 1944, after defeating the Japanese 18th Imperial Division, where the Marauders were vastly outnumbered in five major battles and 30 minor engagements.

“Jungle diseases ravaged their numbers, so only 300 of the approximately 1,300 remaining Merrill’s Marauders were still fit for combat when they reach their objective and later went to join the replacements,” Beverly said.

As a fitting tribute, Marty will be laid to rest at Pahrump Family Mortuary, Monday, Aug.10. Services are scheduled for 1 p.m.

As a civilian, Martin’s profession as a general building contractor and land developer allowed his company to provide thousands of homes for all income levels, his wife said.

“He built the first shopping center in Stuart, Florida, built convalescent centers, hospitals and apartments in Florida, California and Nevada,” she said. “He enjoyed quad riding in the desert, golf, walking his dog and going to the gym. He loved to read and always had a book open. Marty never retired, he most likely has a project on the drawing board in heaven.”