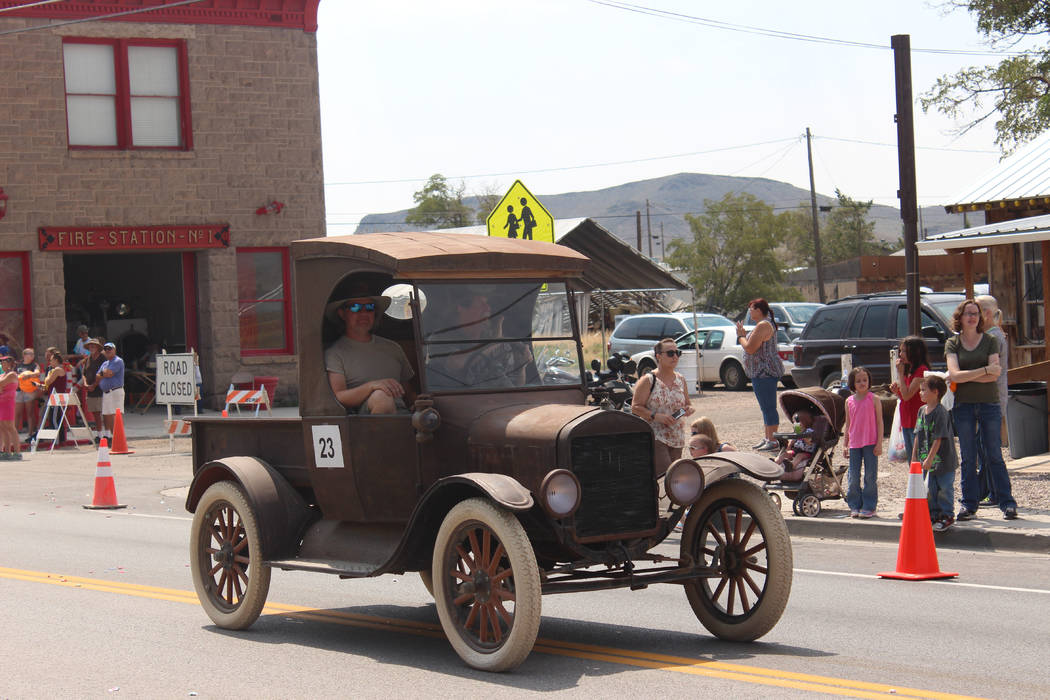 Jeffrey Meehan/Times-Bonanza & Goldfield News Antique cars roll down U.S. Highway 95 in Goldfield for the Goldfield Days Parade on Aug. 5. The three-day event had live entertainment, various vendors and a land auction for properties with unpaid taxes in Esmeralda County. 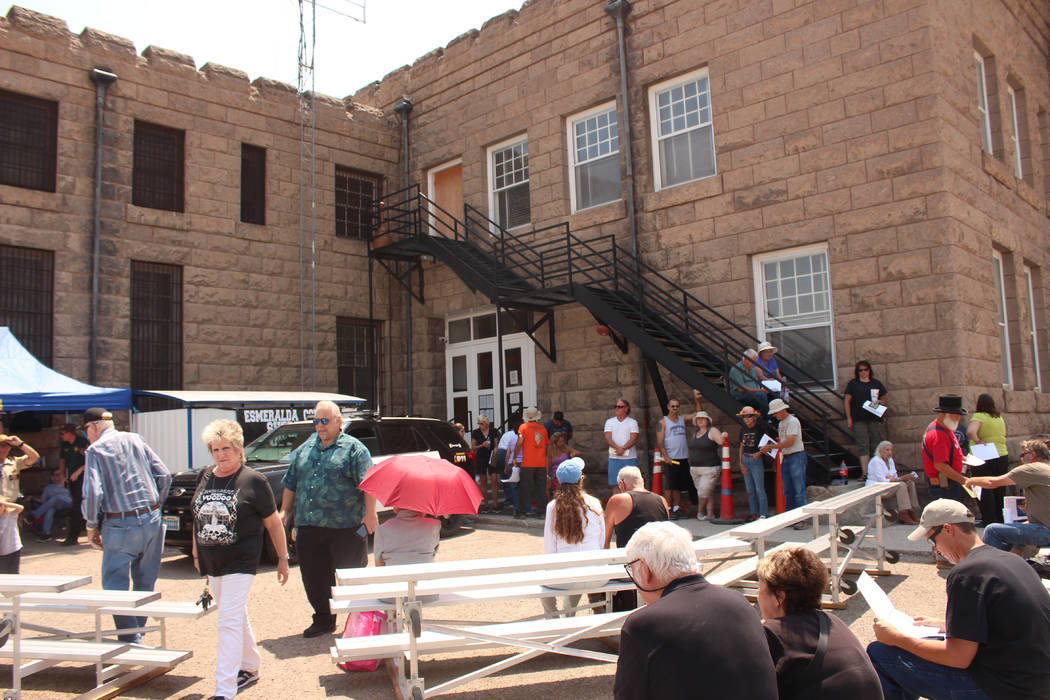 Jeffrey Meehan/Times-Bonanza & Goldfield News Dozens of bidders for land in Goldfield and beyond start to gather near the courthouse at 233 Crook Ave. on Aug. 5. There were 17 properties and one mining claim up for auction. 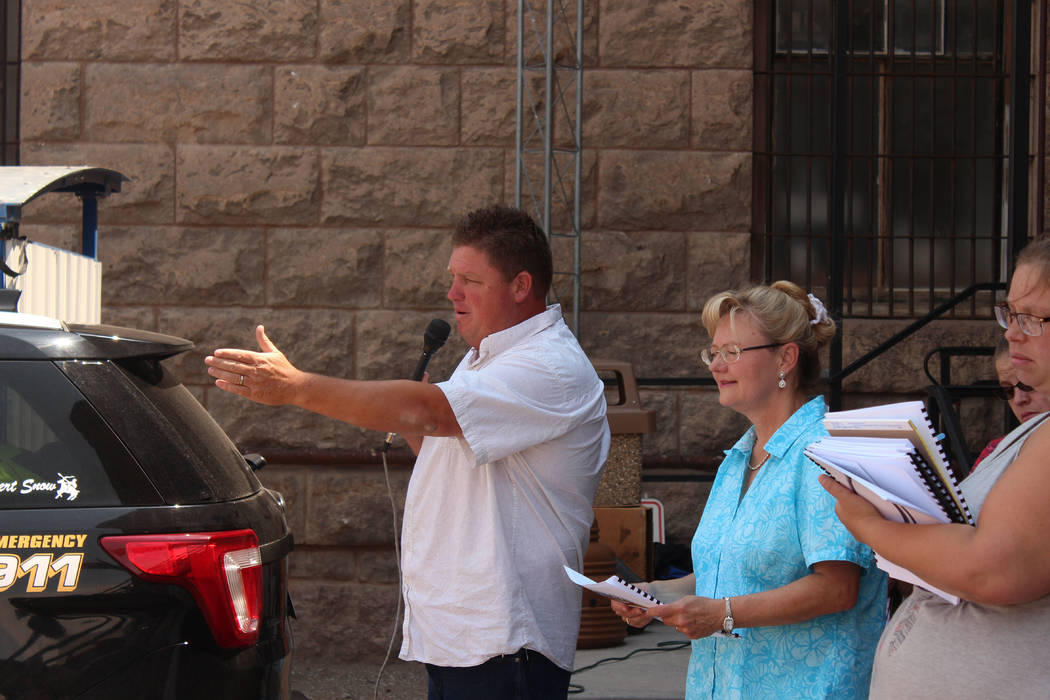 Jeffrey Meehan/Times-Bonanza & Goldfield News Auctioneer and Esmeralda County clerk take bids on 17 properties and one mining claim at the courthouse at 233 Crook Ave. in Goldfield on Aug. 5. Three properties were left without a bid and will be shelved for next year's event. 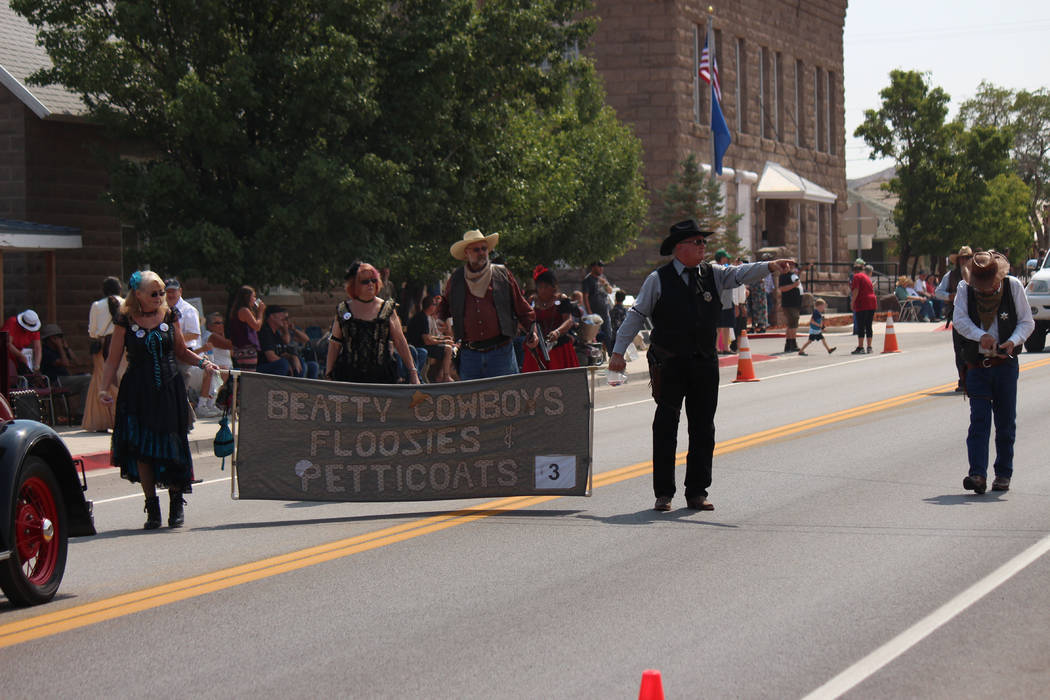 Jeffrey Meehan/Times-Bonanza & Goldfield News Beatty Cowboys make their way down U.S. Highway 95 on Aug. 5 in Goldfield for the annual Goldfield Days parade. A live reenactment of a gun fight was also part of the show. 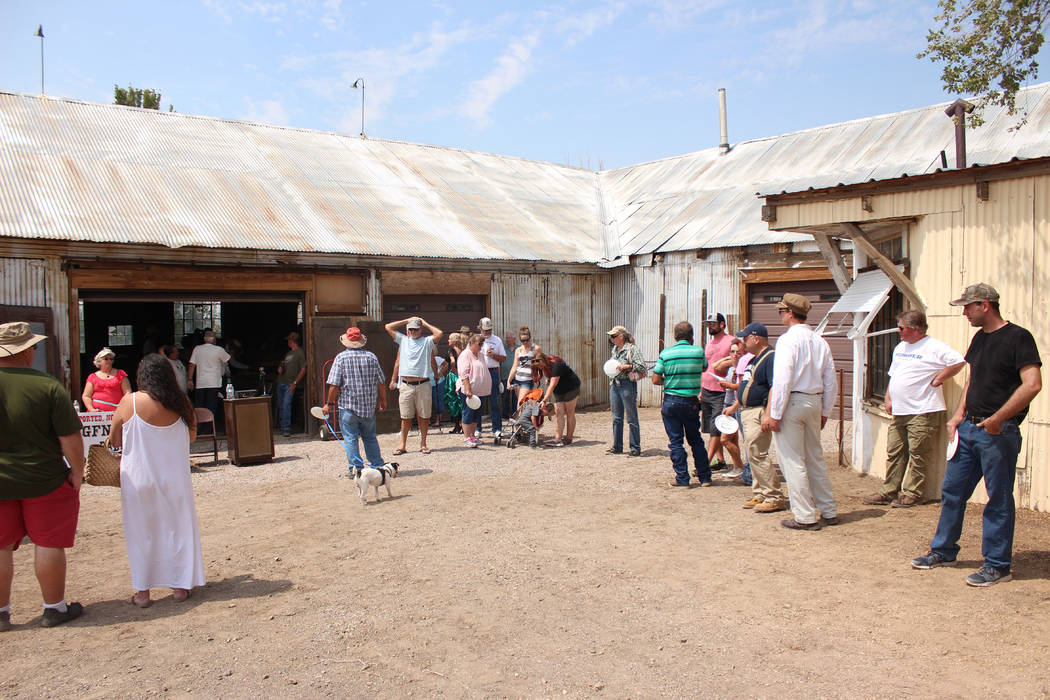 Jeffrey Meehan/Times-Bonanza & Goldfield News People line up near the Goldfield Hotel on Aug. 5 for an auction for dozens of doors from the hotel were being auctioned off. Roughly 100 to 125 doors went out in the auction, benefiting the local Opera House and Radio Goldfield/KGFN 89.1 FM, along with the Goldfield Historical Society. 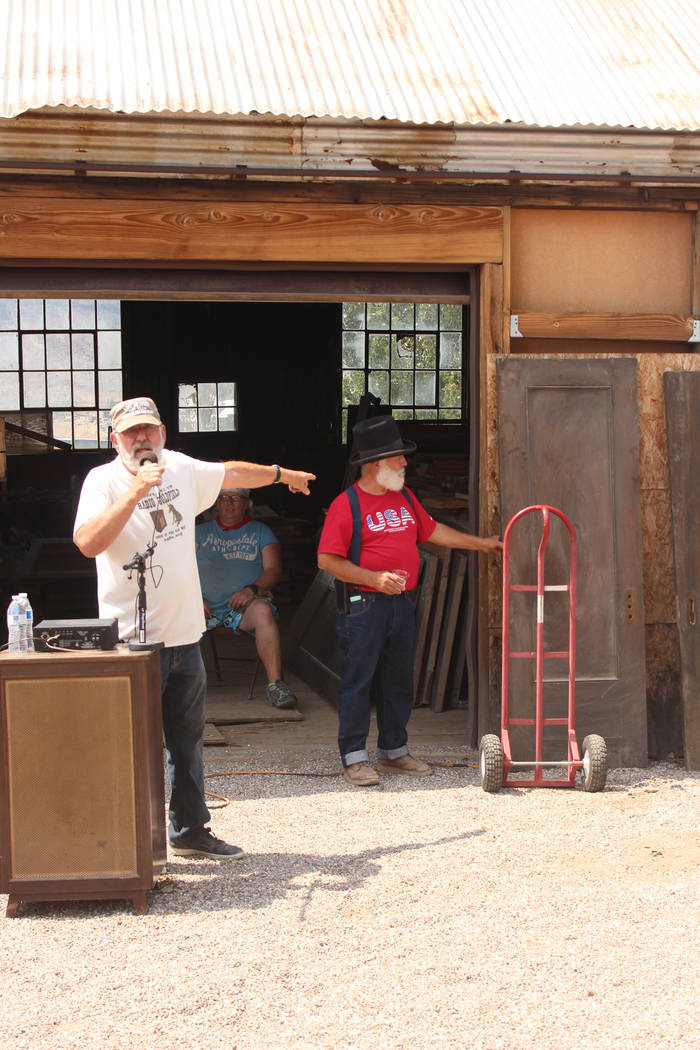 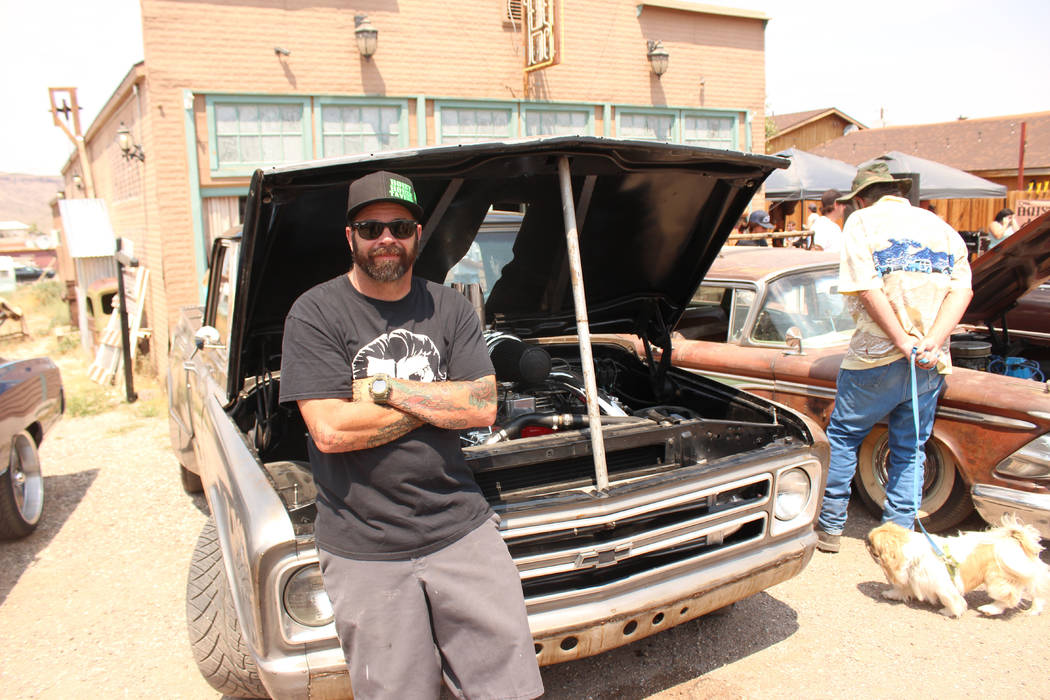 Jeffrey Meehan/Times-Bonanza & Goldfield News Jeremy Daeseleer, owner of the Hoist House Tavern at 300 N Columbia St. in Goldfield in front of his classic Chevy C10 pickup truck during Goldfield Days. The Tavern had live entertainment and a car show out front for the annual affair from Aug. 4-6. 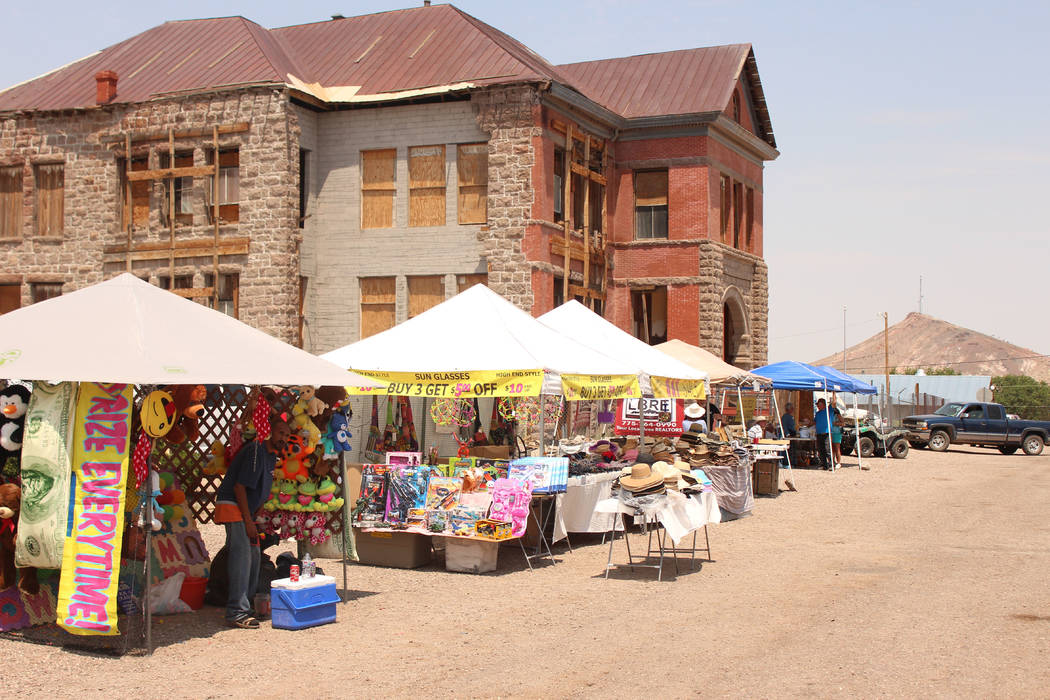 Jeffrey Meehan/Times-Bonanza & Goldfield News Vendors lined up along U.S. Highway 95 and side streets in Goldfield. Goldfield was filled with live entertainment, food and fun from Aug. 4-6 for its annual Goldfield Days celebration. 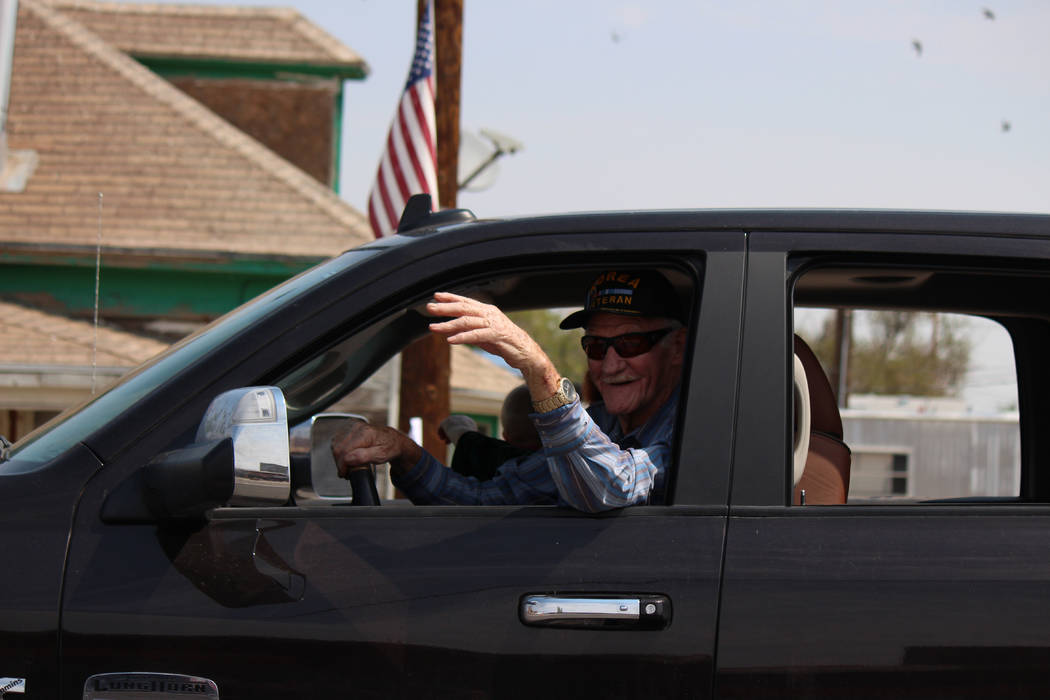 Jeffrey Meehan/Times-Bonanza & Goldfield News Red Roberts, owner of the Goldfield Hotel, was the grand marshal for the Goldfield Days' parade. The annual event went on for three days, from Aug. 4-6.

The three-day event, which ran from Aug. 4-6, brought people from the local area and surrounding areas such as Tonopah, Carson City and beyond seeking land, property and fun. The annual festivities surround Esmeralda County’s land auction for properties delinquent on their tax payments.

“It’s nice to see people that are interested in the location and the things we have to offer,” said Mark Stezaker, president of the Goldfield Chamber of Commerce, which coordinates the event.

Dozens lined the parking lot on the north side of the courthouse in Goldfield at 233 Crook St. at 1 p.m. on Aug. 5, with some arming themselves with a paper sign that had a number drawn on it. Bidders flipped their number up if they wanted to jump in the action on one of 17 properties and one mining claim.

The big bidder was Red Roberts from Carson City, who bought two pieces of property that sit beside his Goldfield Hotel at U.S. Highway 95 and Columbia Avenue. Those two parcels set Roberts back nearly $16,000.

LaCinda Elgan, Esmeralda County clerk/treasurer, said three properties weren’t sold at the auction. Those properties will get sent to next year’s event.

Following the land auction, a large crowd started to form at a building across the street from the western side of the Goldfield Hotel on Columbia Avenue around 2 p.m. There, hundreds of the hotel’s original interior doors went up for auction.

The doors were donated by Roberts to the local radio station and historical society.

Carl Brownfield, program director at Radio Goldfield/KGFN 89.1 FM, who was the auctioneer for the doors, said roughly 100 to 125 doors were sold.

Bidders paid upward of $75 for some of the doors, some fetching even more than that.

“We’re very happy with what we sold today,” Brownfield said. “There are hundreds of people out there that would like a piece of Nevada’s history, and this is authentic Nevada history.”

Many doors are still available through Brownfield by calling 775-485-9923 or 702-241-1901. Sharon Artlip can also be contacted. She is selling hardware for the doors at her Goldfield Art and Business Services shop at 306 Crook Ave.

Other businesses also thrived during the festivities in Goldfield.

Jim Barrere, of Team Barrere at Lisa Bond Real Estate in Pahrump, was one of several vendors that lined up along Highway 95 and side streets around Goldfield looking to profit from the festive weekend.

Barrere said this was his first year at Goldfield Days, but there seemed to be a lot of interest.

His team focuses on real estate in several areas in Esmeralda County and Nye County: Pahrump, Goldfield, Carver, Round Mountain and Tonopah.

Jeremy Daeseleer, owner of the Hoist House Tavern at 300 N. Columbia Ave., said he brought in live entertainment including King vs. Cash and a live DJ.

Dozens of people flocked to the location to check out the bar and classic cars in front of the Hoist House.

Classic cars such as Corvettes, Monte Carlos and El Caminos lined the front of the tavern.

A small bump on Friday left the establishment without power from thunderstorms that brought hail and heavy rains to the region, but that didn’t stop the show.

Daeseleer said he fired up the generator and kept going.

The chamber also raffled off a gold bar, which they paid more than $1,200 for, on Saturday evening. Stezaker said they collected more than $2,000 from the sale of raffle tickets.

Attendees also enjoyed ghost tours at the Goldfield Hotel and other activities all weekend.