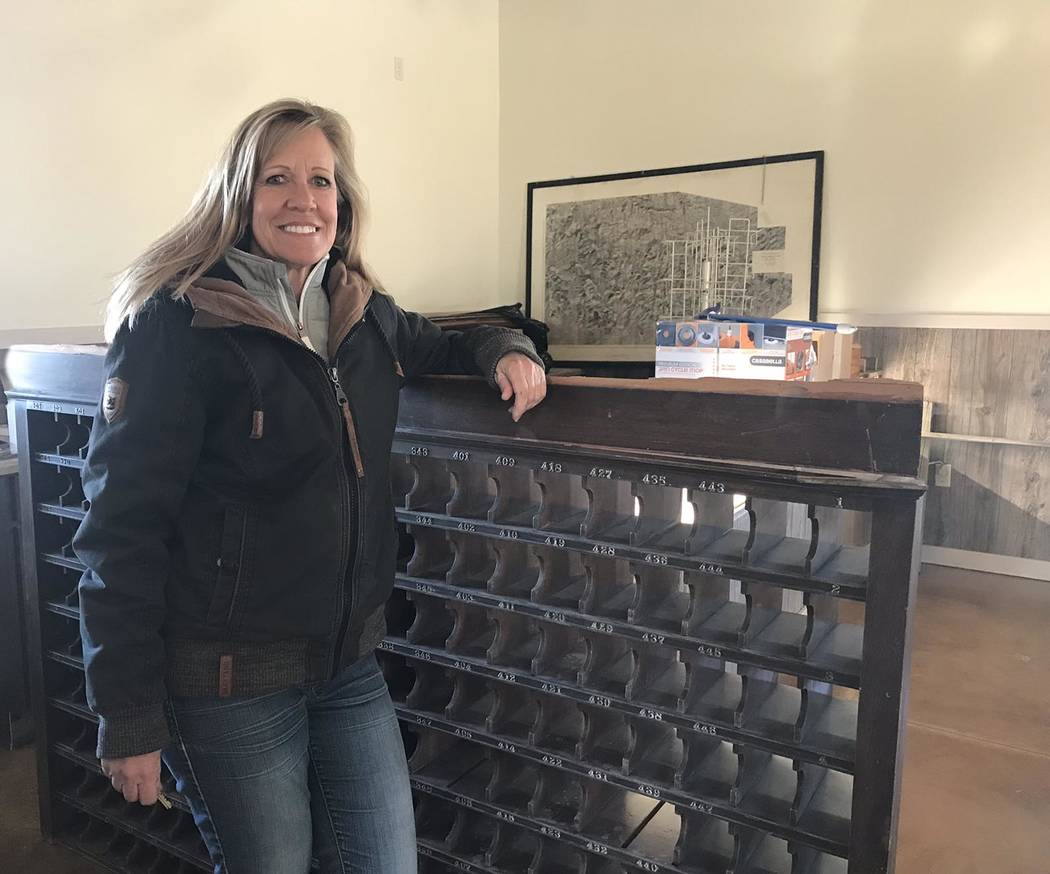 Jeffrey Meehan/Pahrump Valley Times Goldfield resident and business owner Jeri Foutz stands in the Goldfield Visitor Center on Feb. 15, 2018. Foutz is planning a grand opening celebration for the visitor center, which construction was completed in late 2016. 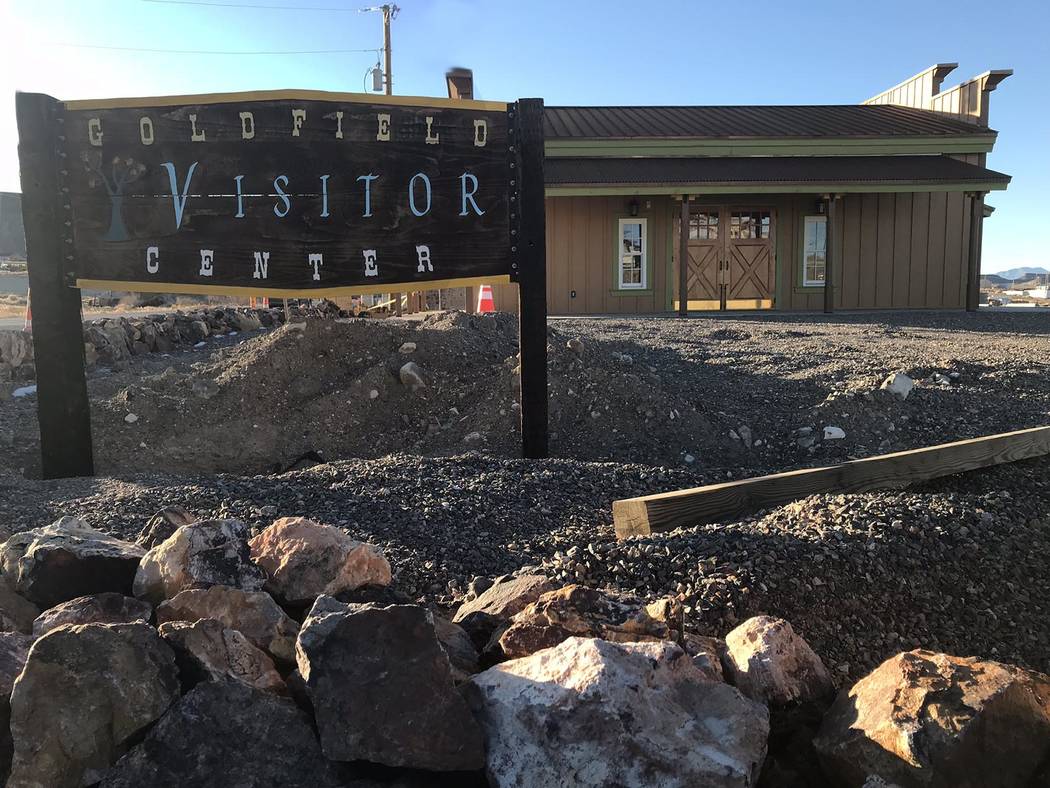 Jeffrey Meehan/Pahrump Valley Times The Goldfield Visitor Center, which sits near 1st Street and U.S. Highway 95 in Goldfield, is pegged to have a grand opening celebration on April 28. The celebration will feature several local businesses and potentially attract many from across the state, including the Nevada Gov. Brian Sandoval. 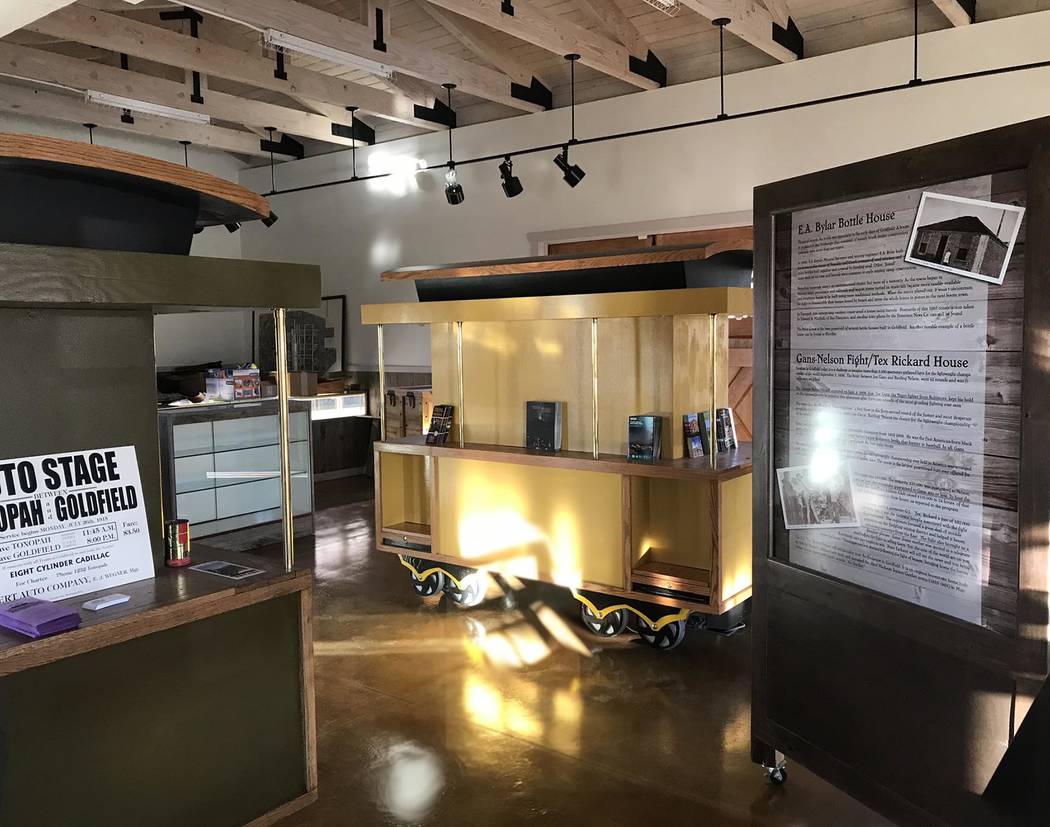 Jeffrey Meehan/Pahrump Valley Times Jeri Foutz, Goldfield resident and business owner, is spearheading the opening of the Goldfield Visitor Center. Pictured is progress seen from the inside as of Feb. 15, 2018. Efforts continue as a planned April 28 grand opening nears. 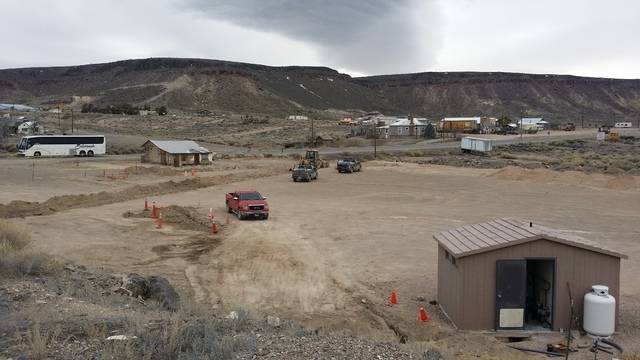 Jeffrey Meehan/Pahrump Valley Times Early efforts on the already completed Goldfield Visitor Center in April 2016. The site now contains a 1,200-square-foot building, which is readying for a spring 2018 opening.

The Goldfield Visitor Center is pegged to come to life at the end of April.

Goldfield resident and business owner Jeri Foutz is spearheading the opening of the 1,200-square-foot visitor center near First Street and U.S. Highway 95, hoping to increase tourism in the area through her efforts. A grand opening celebration is planned for April 28.

Foutz said she is hoping to have several booths showing off the area’s businesses and offerings. She is looking to invite people across the state, including Nevada Gov. Brian Sandoval.

“When we have this grand opening, I want all of Nevada to be involved in it,” Foutz said. “I’ll have different booths out here, which will hopefully represent all things there are to do around Goldfield.”

Some of the offerings that Foutz wants to show off include paranormal tours, which she leads. Foutz also guides photography and historic tours in Goldfield. She also owns her own photography business, Just Jeri.

Other attractions in the area include the International Car Forest of the Last Church, Zero1 Ranch &Offroad Compound and others. These attractions, and others, will be represented at the grand opening event.

The visitor center broke ground in April 2016, and was finished later that year.

According to a news release from the Nevada Department of Transportation, the project, a partnership between Esmeralda County and NDOT, cost $712,369 to construct.

NDOT agreed that the center could become an amenity for the town.

Foutz came to town in the summer of 2017 from Grants Pass, Oregon with her husband, a retired physician.

She’d been in town for a little while and joined the Goldfield Historical Society, where she learned the visitor center has not been opened yet. Becoming interested in the project, she got with the county, later putting together a proposal for managing the project.

In October, she presented her effort to the Esmeralda County Board of Commissioners, who quickly approved the measure.

Since then, Foutz has worked to clear some of the things out that were being stored in the space. She has also been fixing some things up on the inside and is hoping to bring some historical items into the space.

She is looking for period pieces from about 1903 to 1915, which will be donated for use. The pieces will remain under private ownership.

“It will still be theirs, but it will be shown here,” Foutz said.

One of the items already in place is a large, wooden rack, with dozens of slots that once held the keys for hotel rooms at the Goldfield Hotel when it was open.

Foutz said she is hoping to have the center be self-sustaining, as Esmeralda County doesn’t have that much money to keep things going. She is planning to bring items in for sale, and the money will stay with the building.

This not Foutz’s only venture in Goldfield.

She is working on purchasing what was once the Elite Trading Post, which sits just west of the visitor center project.

Foutz is also planning to lease the space that previously housed the trading post. She is planning a similar use for the space and continuing plans to construct several vacation rentals that the previous owners, Malek and Jody Davarpanah, had in mind for the space.

The Davarpanahs had closed the trading post around March 2017 after being forced to move to a lower elevation due to health concerns.