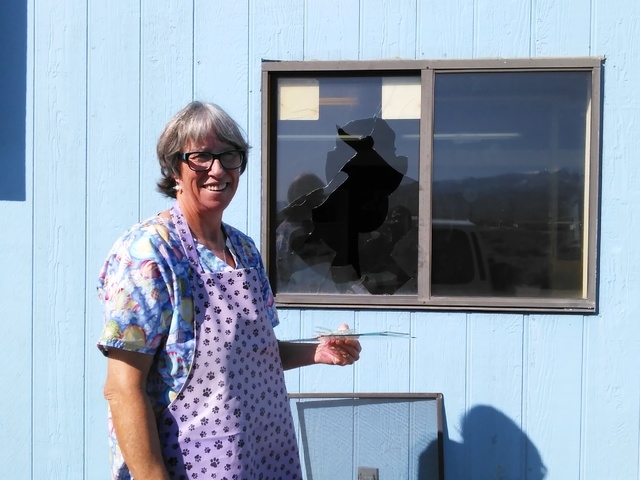 The moment Pahrump business owner Sami Drain arrived at her Groomingdale’s pet grooming shop along Charleston Park Avenue on Tuesday morning, she sensed something was not right.

Drain noticed one of her windows was shattered and immediately called the Nye County Sheriff’s Office.

Soon thereafter, Drain was puzzled to learn that aside from the broken window, everything appeared to be in order inside her shop.

“Nothing was taken,” she said. “They used something to break the window, climbed in, looked around inside and just left. If this was an act of vandalism, you would think they would vandalize the inside of the store, but I’m glad they didn’t.”

Drain said she estimates the break-in occurred within an approximate 12-hour window.

“My daughter was here at 8 p.m. cleaning up, so I believe it happened sometime between 8 p.m. Monday night and 8 o’clock Tuesday morning,” she said. “I don’t know if they were looking to see if there was money or a cash register, but I never keep any money in there.”

She also said she doesn’t have a clue about what would motivate someone to commit the act.

“I have no idea who did this and the police were kind of dumbfounded too, because nothing was taken,” she said. “If it was vandalism somebody will just throw a rock and leave, but they actually went through the window because you can see the footprints leading out the back door.”

Drain lamented the incident only created an additional expense for her, as she immediately called a company to replace the window.

“It’s pretty irritating because what are they going to steal from me?” she questioned. “What are they going to do, take my dog clippers? It’s just crazy because it’s going to end up costing me because I have to pay to replace the window, which is close to $200, so I’m out money no matter how you look at it.”

Though a sheriff’s deputy responded and took a report, Drain said she’s really not all that hopeful the individual will be located and brought to justice.

Despite the criminal act, several of Drain’s regular customers were bringing in their pets as usual on Monday, which appeared to soften the blow for the business owner.