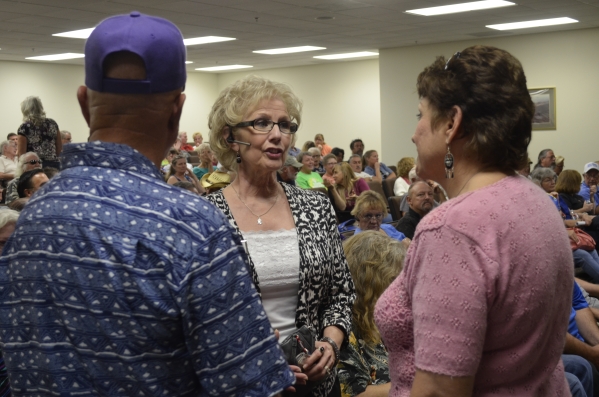 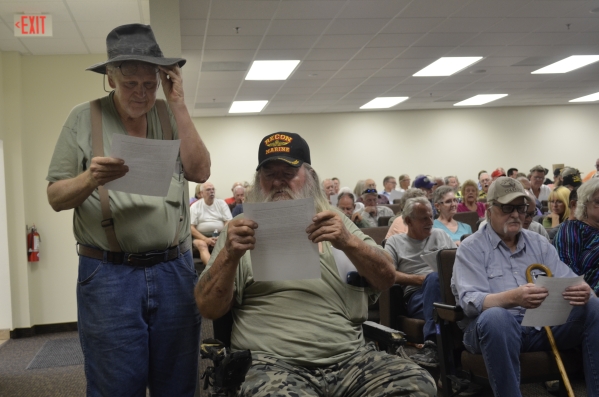 The fifth draft of the Basin 162 Groundwater Management Plan sparked a heated debate among officials and Pahrump residents, resulting in a number of proposed changes that are expected to be incorporated in the coming months.

The Nye County commission chambers were filled to overcapacity on Monday morning as the Basin 162 Groundwater Management Plan Advisory Committee and the Nye County Water District Governing Board sparred over some hot-button items from the plan that had been in the works for almost two years.

Dozens of Pahrump residents were upset about proposed regulations that aim to meter and place pumping restrictions on new domestic wells. The overcrowded event drew the Nye County Sheriff’s Office and Pahrump Valley Fire Rescue as dozens of attendees dotted the parking lot in front of the county commission chambers ahead of the meeting.

Merrilee Spoor, who moved to Pahrump from Bakersfield, California five years ago, lambasted the proposed plan.

“We don’t want it because we bought the property as our property with the (water) rights, with the water underneath it and that is ours for generations to come and now they are trying to take that away from us and we don’t want it,” she said.

“I’m totally against it. When I bought the property, I bought my percolating water, that’s part of the soil in my property. Nobody can take that away from me and I can’t sell it,” said another Pahrump resident, Michael Page.

In a letter addressed to Pahrump residents ahead of the meeting, an alternate of the Basin 162 Groundwater Management Plan Advisory Committee Kenny Bent said most of the details that residents are concerned about are not in the plan but will be discussed as it’s being developed.

“Zoning, growth ordinances, taxes, etc. will be discussed and implemented by changes to county ordinances – we all agree to get educated and get involved. But trying to kill the plan is counterproductive and doing nothing will force the state engineer to manage the basin with the tools he currently has – curtail based on priority date,” the letter said.

“Domestic wells are exempt from permitting requirements under state law as long as they pump less than 2 acre feet annually. We have over 8,000 lots larger than one acre, with many more allowed to be parceled or subdivided under current laws. If they are allowed to be drilled and pumped, it will put existing wells at risk,” Bent added.

Nevada State Engineer Jason King, who also attended the meeting, said there has been a lot of misinformation about the plan coupled with misunderstanding of Nevada water law.

“I understand domestic well owners are upset about this (plan), but there’s also a (Nevada) water law that has to be followed and domestic wells have a priority of the date that they were drilled, they are some of the most junior rights in the basin. And it’s OK to be upset, but it doesn’t change the law.”

King said the pumpage in Pahrump Valley currently stands between 13,000-to-14,000 acre feet, while an estimated recharge comes to 20,000 acre feet of perennial yield. Pahrump isn’t over-pumping, however King said over-allocated water rights in Basin 162 could bring the town to a critical level.

“That’s why I think timing is everything. Let’s get this plan going now before all the pumping gears up again and the water level starts to decline,” King said.

The plan also requires a change to the state law. If passed, it will apply to every domestic well in the state that the state engineer deems to be in an area of critical management, Bent said.

Earlier analysis of 10 years of data from well level measurement throughout the Pahrump Basin showed an overall steady decline of approximately one to two feet per year in water levels in portions of the basin.

“I think it’s a really good first step,” King said about the plan. “It still has a ways to go because there’s not a number for everything on what they are proposing, but I think it’s a great first step and I appreciate all the effort that went into it.”

Some of the recommended changes to the plan involve table 3 from the groundwater management plan that specifies adjustment for over-allocation by crediting reuse, recharge and over-dedication of water rights. Officials are set to bring the plan for discussion on Jan. 26, 2016.

“I think most people want a plan, they really do,” Greg Dann said. “I think this valley has run amok because we had no plan. So, I think and I’m going to speak for the community again, say that I think we want an equitable plan. … I feel that it’s not as equitable as it can be at the present time.”