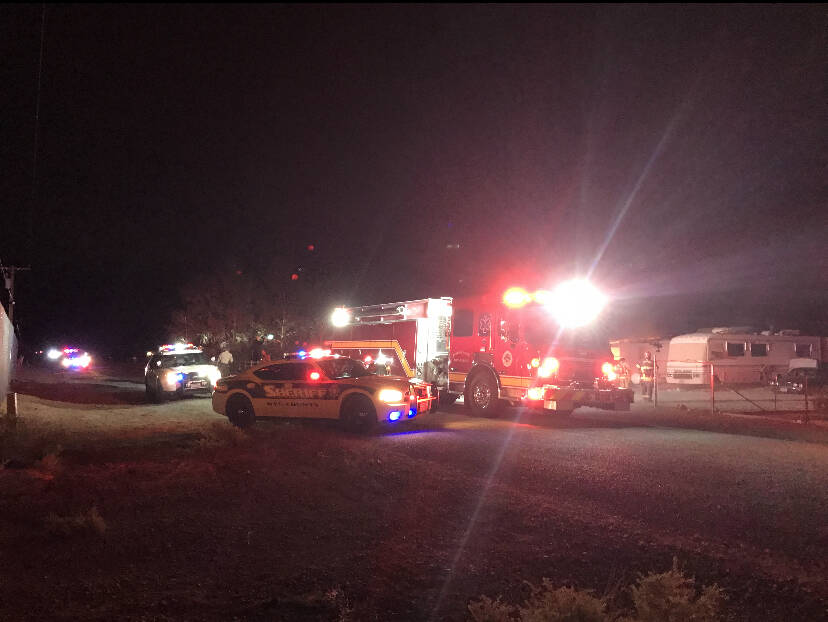 (Nye County Sheriff's Office) Very gusty wind conditions have hampered firefighters efforts to extinguish several fires throughout the valley. Crews were dispatched on May 7 for a report of a structure fire along West Dutch Ford Road.

Pahrump Valley Fire and Rescue service’s Chief Scott Lewis said crews responded to a report of a structure fire at a home on Willis Street just after 4 a.m. on Monday, May 2.

“Upon arrival of the Engine 3 crews, they found light smoke showing from a manufactured dwelling,” Lewis said. “The investigation revealed an electrical fire within a wall of the home. The fire was quickly contained with no extension and there were no injuries.”

On Tuesday, May 3, crews responded to a structure fire along the 3000 block of West Maple Road at approximately 12:50 a.m.

Upon arrival, crews found smoke and fire showing from the underside of the structure.

“Crews commenced an attack and made sure all life safety issues were covered, and quickly extinguished the fire without further extension,” Lewis said. “The cause of the fire was related to a probable malfunction all of the clothes dryer. No injuries were reported.”

On Wednesday, May 4, crews were dispatched to the 2500 block of Cabo Street for an unknown type of fire just before 2 a.m.

“We arrived on location and found a wind-driven fire that involved a class-A motorhome with an attached multi-car garage and a residential wood frame structure,” Lewis said. “The property was used on occasion and it was unoccupied at the time. There were no life safety issues and crews commenced a defensive exterior objective and quickly controlled all aspects of the fire Within approximately an hour. There were no fire hydrants in the area, therefore water tenders were used to shuttle water in. The cause of the fire is thought to be accidental in nature.”

On Saturday, May 7, crews were dispatched for a report of a structure fire along West Dutch Ford Road at approximately 12:51 a.m.

“Crews arrived on location and found a structure that had previously burned back in February,” Lewis said. “Fire was showing and crews ensured that there were no life safety issues. They performed a defensive exterior objective and quickly extinguished the fire with no further incident. The cause of that fire is under investigation, but it was not thought to be intentional.”

On Sunday, May 8, crews were dispatched to the 4300 block of Kisha Avenue for a report of a structure fire just after noon.

“Upon arrival, they found a wind-driven rear porch fire,” according to Lewis. “There were no immediate life safety issues and crews quickly controlled the fire with no extension. The cause of that fire is thought to be accidental in nature, possibly related to improperly discarded smoking materials.”

On the same day at 3:24 p.m., crews were dispatched for a report of a small wind-driven brush fire that was reported to be growing in size.

Another report prior to the arrival of crews indicated was that the fire involved a power pole and was also threatening a commercial structure, according to Lewis.

“Crews arrived and confirmed that the fire extended to the power pole, and a former pizza business on the corner of David Street and Charleston Park, Lewis said. “Crews quickly controlled the brush fire, while Valley Electric crews tackled the power pole fire.”

Lewis went on to say that fire crews entered the vacant structure and quickly extinguished the advancing fire inside the building.

“There were no injuries reported and the cause of the fire is thought to be accidental in nature, possibly due to the improper disposal of smoking materials in wind driven conditions,” he noted.