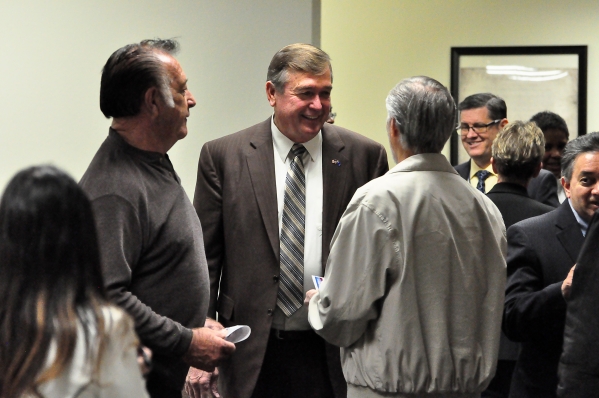 Congressman Cresent Hardy heard many stories about the difficulties of receiving health care during his Pahrump veterans town hall attended by approximately 30 people on Thursday.

Veterans also talked about problems that they encounter when trying to access benefits, or dealing homelessness and substance abuse.

“It’s nice to have a panel here and have the congressman here, as well as all these influential individuals, but as you know, you are looking into these folks, talking and asking you questions, you are far away, very far away,” he said.

Speaking about rural medicine specific to veterans Carbone said, “It ain’t out there. We need to be more and closer to our veterans as much as we can.”

“I’m not a happy guy,” Carbone said, pointing to the audience of several dozen veterans. “And I’m not happy because these guys are not happy.”

Thursday was Hardy’s second official visit to Pahrump in the past three weeks. He was among the many dignitaries who participated in the Jan. 29 groundbreaking of the $12.1 million Pahrump Valley Veterans Clinic on South Lola Lane.

Hardy, whose brother served in Afghanistan and Iraq, talked respect for veterans stating that “politicians often get involved and don’t let them do the job,” when veterans fight in wars.

“My little brother, I understand through him that military people are a brotherhood, different than anything that I think we can understand that’s never served,” he said.

One of the panelists, Sheila Jackson, the director of the Reno VA Regional Hospital, said she is currently working on creating an umbrella for spreading VA services to Nevada communities. Ben Jefferson, a U.S. Air Force veteran who was also on the panel, said that there’s a lack of a clearing house where veterans can have access to multiple services.

“There are so many resources out there,” he said. “My hardest problem that I’ve had here is finding out who all those resources are, where they are all meeting at. … We need to have it all and put into some kind of a resource book, a resource technology on the Internet or something (that) we can access, that we can get to and we can help those vets.”

Jefferson also spoke about the need to bridge the communication gap as some veterans are less comfortable using technologies for communication than others.

“That’s what they want and that’s what we have to realize is that it’s not going to be just those new veterans that are getting out who can use computers and do it that way, but we still have other veterans out there who want that face-to-face time,” Jefferson said.

Jacob Fullmer, communications director for Hardy, said veterans who need help settling a claim with the VA or receiving benefits from a federal agency can contact Congressman Hardy’s office at 702-912-1634.

The 90-minute question-and-answer session at the Nye County Commission chambers at 2100 E. Walt Williams Drive was teleconferenced to Beatty and Tonopah.