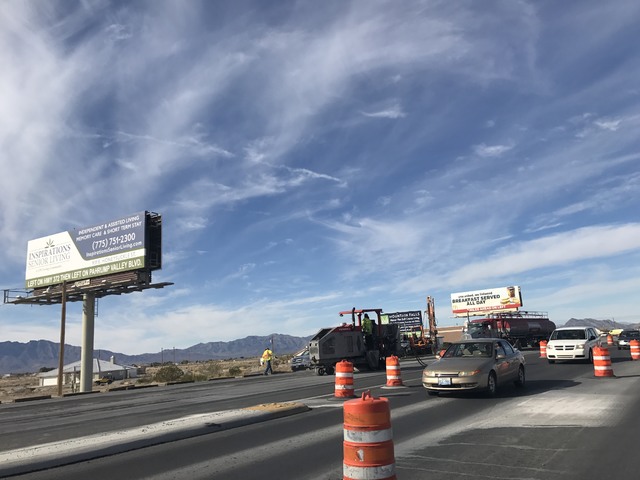 The Nevada Department of Transportation said despite being about 95 percent complete, the $3.49 million widening project on Highway 160 in town, which began on June 20, will be completed in the spring of 2017. The delay is due to the drop in temperatures. Mick Akers/Pahrump Valley Times

The Highway 160 widening project in town is nearly complete, but won’t be finished until next year.

The Nevada Department of Transportation said the $3.49 million widening project, which began on June 20, will be completed in the spring of 2017.

The project is expanding a 1.75-mile-long section of heavily-traveled highway between Rainbow Avenue and Calvada Boulevard which sees about 21,000 vehicles per day.

Improvements included in the project include expanding the highway from two travel lanes to four, while adding a center turn lane and flattening side slope shoulders in some areas for safer vehicle turnouts.

Despite being 95 percent complete, crews will continue working through December performing various tasks, including grinding the highway surface for smoothness, seeding, and adding rock to the highway shoulders.

Due to weather issues, a final three-quarter-inch open grade finishing course that provides for better tire traction and stormwater drainage cannot be completed until the spring.

Falling temperatures in the winter months can cause asphalt pavement to cool too quickly, making it difficult to achieve a proper compacted density, according to NDOT. This results in a rough rocky surface that retains water, thereby causing it to fail prematurely for a reduced pavement life cycle.

“These are vital infrastructure improvements to the Pahrump community,” District 36 State Assemblyman James Oscarson said. “As such, it’s important that the work is done correctly.”

Construction crews are scheduled to continue the project in April to apply the open grade finishing course and place the final highway striping. The finishing touches are expected to take one to two weeks to complete.

Temporary striping will be placed in coming weeks as the stretch of Highway 160 will be open to four lanes of traffic without any barrels, barriers or other traffic controls between Rainbow Avenue and Calvada Boulevard.

The project will appear finished, but still requires the final steps to ensure its life cycle is not compromised.

Motorists should use caution while traveling through the work zone, heed construction signage, and take alternate routes, if possible. NDOT works to inform the public about planned highway restrictions, but unscheduled construction changes, closures and restrictions are possible due to weather or other factors. For the latest state highway conditions, visit nvroads.com or call 511 before driving.