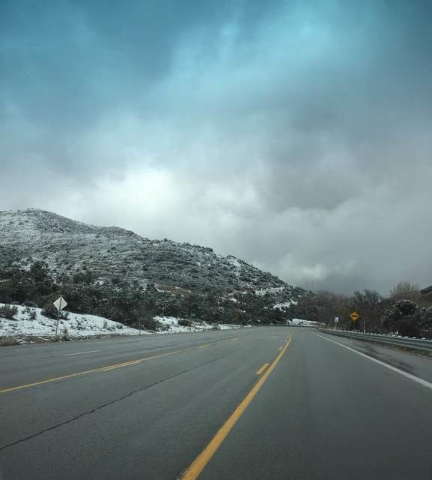 After one stretch of the dangerous State Route 160 between Pahrump and Las Vegas is widened, a second portion of that roadway will undergo a similar project, all aimed at making the corridor safer for commuters.

The Nevada Department of Transportation held a public meeting at the Pahrump Community Library on Thursday announcing Phase 2 of the SR-160 widening project that will take place in the Mountain Springs area. A portion of the highway will be widened from three travel lanes to four, in addition to other updates.

As it stands now, the northbound side already has two lanes up until the volunteer fire station (near mile marker 21) at the top of Mountain Springs, but the southbound lanes have a single travel lane throughout the stretch.

The second portion of the widening project, which will cost between $50 million and $60 million, is scheduled to begin just after Phase 1 is finished.,The initial plans call for an almost six-mile portion between mile marker 16.3 and mile marker 22 to be included in Phase 2.

“Basically, this is the last portion that we’re going to widen of the whole corridor and we are going to start construction basically as soon as Phase 1 is finished in October 2017,” said Luis Garay, project engineer with NDOT.

In addition to the highway widening, the project calls for frontage roads for residents in the area to increase safety for them and allow for more convenient school bus dropoff and pickups for area students and their families.

Also, a wildlife crossing that runs underneath the highway near mile marker 18, wildlife safety fence, a bike shoulder, new signage for Mountain Springs and some of the the roads in the area and landscaping, with art installations will be included in the project.

The two roads that you can turn off in the Mountain Springs area will have their signage updated, along with decorative figures placed around the area.

“Cottonwood Valley Road is supposed to mimic events that might have happened nearby in Cottonwood Springs,” she said. “It was a big watering hole and camp spot.”

Mount Potosi Canyon Road signage will also see a facelift, with the theme playing off the history of the area as well.

“This section is more about mining, because there was big mining on Mount Potosi and it’s on the way to the Boy Scout camp, so that’s the design intent there.”

A stretch of road that has a blind corner that is deemed the most dangerous spot on the corridor will feature a center median.

The speed limit will be lowered to 45 mph from mile marker 19 to mile marker 21.5, to increase safety for the residents of Mountain Springs. In that area there will also be an emergency signal placed in both directions ahead of the fire station to notify drivers in advance if a vehicle is leaving the station.

Improvements in the $16.5 million Phase 1 portion, which runs from mile marker 10.89 (just past the Red Rock Canyon Road junction) and mile marker 16.63, include flattening side slope shoulders for safer vehicle turnouts, while installing new drainage pipe and tortoise fencing. Other work consists of placing barriers and guardrails as well as hydro-seeding 38 acres.

The first mile of Phase 1 is scheduled to open later this month.