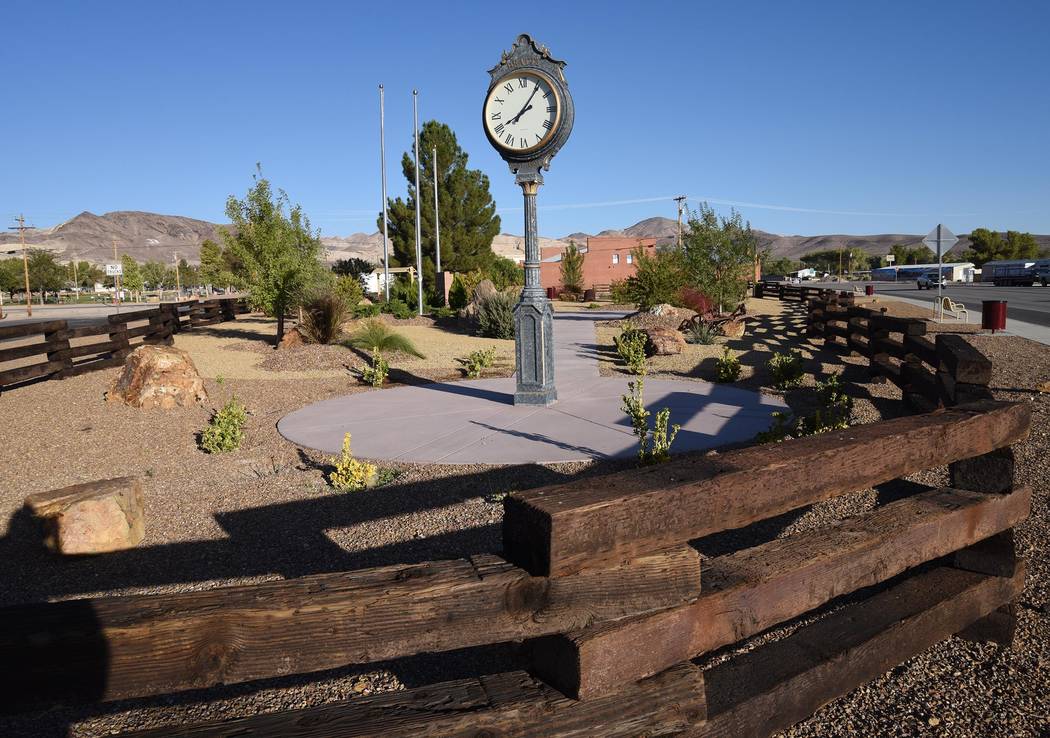 Richard Stephens/Special to the Pahrump Valley Times The Robert A. and Florence Revert Beatty Town Square Park, which welcomes visitors to Beatty, will be getting lighted garlands around the fence perimeter to decorate it for the winter holiday season.

Beatty Town Advisory Board treasurer Erika Gerling was practically giddy when she discovered that the lighted garlands she wanted for the Robert A. and Florence Revert Town Square were actually the less expensive choice of the ones being considered.

Gerling was surprised with that information during the board’s Oct. 8 meeting. At the board’s previous meeting, she had proposed spending up to $10,000 for holiday decorations for the park, but this had met with resistance from some board members.

Chairman Dick Gardner had said that the park lacked some electrical hook-ups. He also felt they could find something cheaper, to which Gerling replied that if they did not buy commercial-grade materials, they could be wasting money.

Crystal Taylor had also said that electricity was an issue, as was storage, and that she felt that $10,000 was too much.

Kelly Carroll said, “We have lights that we can’t use now,” referring to ones in the intended Christmas tree in the middle of the park.

This time Gerling came with a proposal to spend no more than $6,500 for the decorations, which would wind around the perimeter of the park fence.

Gardner suggested that they only decorate the fence facing Highway 95 for now, which would cut the cost, but this was before Gerling and the board learned from secretary Carrie Radomski that the garlands were substantially less expensive.

In the end, the board approved the request for up to $6,500, which is much more than what the decorations will cost, and Gerling promised, “I’ll be frugal.” Radomski also said that the seller had indicated he might give a discount for an order of that size.

John DeLee came before the board, standing in for Michael DeLee in a request for the abandonment of some alleys and an unused section of Holland Street on behalf of property owners.

One of the requests was for the abandonment of an alley on the west side of the block where Beatty Elementary and Middle Schools are located. This request was made because it was discovered that a recently constructed apartment building is bisected by an unused piece of alleyway that dead ends at the school athletic field.

Gerling talked about the various steps involved in the abandonment process and said that the board would first need a response from utility companies giving their approval for the abandonment. DeLee said that he had spoken with utilities and that they had no objection, but the board said it needed to see their response.

“We have to be careful about giving this land away,” said Gerling, ” or we may be doing it many times for other people.”

Another factor, that of how the land came to be an alley, through dedication or otherwise, also affects the process and determines if the abandoned land simply reverts to the property owner or must be offered for sale.

The other request was for abandonment of an unused section of Holland Street between Reibel and Montgomery Streets and another section of alley.

The board received a letter from the Beatty Water and Sanitation District opposing this abandonment because of infrastructure they have in the area.

No action was taken on the requests, and the matter was tabled until a future meeting.

The board did approve giving the town’s old radio translators to Goldfield Radio.

“We couldn’t sell them,” said Gardner, “because everybody has the new ones.” He said the Goldfield station would use them for parts for its older translator.

Marty Campbell reported to the board that progress was being made on repairs to the Beatty Senior Center, and that they might be able to move back in soon. He said they would, however, like to keep their bingo night in the Community Center because they have had better attendance when using the larger room.